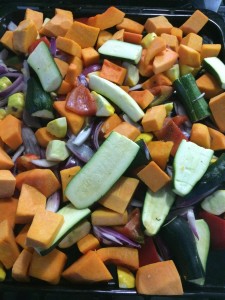 Developed by founder Wayne Kaminsky, who told us that he was a superfit fitness fanatic sportsman, participating in Ironman and Cape Epic challenges, and needing to find a more healthy eating pattern to lose weight.  He was using antibiotics, and could let them go when the benefits of the ‘clean eating’ came to the fore.  He moved more and more to healthy foods which he enjoyed cooking, making a batch of portions over weekends, and finding them selling well when he posted photographs of them on Facebook.  He started FitChef three years ago, and the Cape region was opened a year ago.  Wayne has tremendous energy, and his food preparation skills were impressive, preparing our dinner simultaneously at 10 food stations, at each of which a different dish was prepared.  He had prepared some of the dishes, and talked us through each food preparation station, each containing a different set of ingredients for a dish to be made. I noticed that a lot of ingredients came from Woolworths, but Wayne said that they prefer to use Pick ‘n Pay products. I questioned Wayne about his use of some Robertsons products, and he said that it was just for our dinner, and that they use fresh herbs in the factory food preparation. 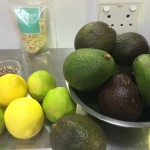 In the preparation of the food for our dinner,  Wayne said that table salt is ‘poison‘, and that they only use natural Himalayan salts. He uses a lot of grapeseed oil from Woolworths.  Wayne made the food preparation look easy, juggling the preparation of the dishes whilst chatting away.  He did receive assistance in preparing some of the dishes from the attendees.  Simplicity is the key word, he said.  He made the following dishes: a Mediterranean bake drizzled with grapeseed oil; the most delicious Parma 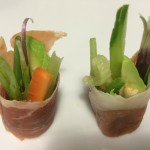 ham ‘sushi‘; fried Camembert in batter; Edamame beans with Tamari gluten-free sauce; chicken prepared two ways, both made with rosemary brine sauce, one pan sprinkled with sesame seeds; mushrooms drizzled with grapeseed oil, dotted with butter and a little chili, and baked in the oven, a big favourite with children, he said;  large sheets of phyllo 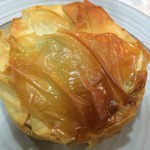 pastry were filled with spinach, Usana free-range eggs, and feta to make a most delicious pie;  avocado lightly fried in grapeseed oil;  broccoli, bean, asparagus, and pea dish; chicken with Red Thai or Green Thai curry; and a green smoothie, with banana, spinach, apple, and pears.

Wayne has a lot of stories, and I was interested when he names-dropped his MasterChef SA experience, as I did not recall his name in Season 1.  It turned out that just about everything that could went wrong with his dish for the cold audition, not making it into Bootcamp. He did persevere until the bitter end, despite realising that he would not make it any further.  Wayne is inspired by Jamie Oliver, and uses Pinterest to find new recipe ideas.

The ingredients for the prepared meals are bought in from farmers they have developed relationships with.  The meals are prepared at factories in Lanseria and Montague Gardens, and then delivered to one’s home by regional representatives, who are the manifestation and face of the company.  One can also take cooking classes, and they provide small easy-to-follow recipe cards, which use photographs to show what should be done at each step.

The focus of the company is to ‘Eat Clean’, by supplying food which is natural, clean, and healthy, being as close as possible to its 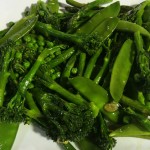 natural form.  It is high in fibre, does not contain preservatives, no additives, no colourants, no refined ingredients, no hormones and antibiotics, low carb, no table salt, is gluten-free, and contains no sugar. The food is Halaal-friendly.  Grass-fed and free range chicken, eggs, and other meats are used, which are described as ‘organic‘.  Packages cost R1040 for a Starter Pack of 18 meals and 10 smoothies; 21 day weight loss kit costs R3385 for 54 meals and 44 smoothies; Monthly Maintenance of 30 meals and 30 smoothies costs R1915; Banting/LCHF starter kits consist of 30 oil sachets, 50 meals, 37 smoothies, 14 chicken portions, and 15 mixed nut packs;  Detox & Weight Loss packs consist of 72 meals and 60 smoothies, costing R 4493;  Vegetarian (R4277); and Sports Performance kits cost from R3774.  The advantages for customers is avoiding temptation in buying products when shopping in a supermarket which one does not need; and not having to go to a supermarket, as the meals are delivered into one’s home, the delivery cost being built into the costs quoted.  One feels better and lighter the following day on the eating plans.  Frozen dishes can be kept in the freezer for 3 – 4 months, and 3 – 4 days in the fridge.

I chatted to Jan Grobler, the  Operations Director, and responsible for the Western Cape region.  He told me that he was previously an advocate, and offers small business consulting services in Australia, South East Asia, and at home. He still does a little legal work, but 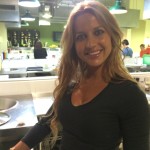 is focused on FitChef.  He is passionate about cooking, and has a game tourism farm in  Thabazimbi.  I met Izelle Hoffman, the FitChef Brand Ambassador, a beautiful blond spokesperson who has suffered from congenital hip dysplasia.  She has had 13 hip operations so far, walked on crutches throughout all of high school, and tried every remedy to attempt to improve her conditions.   She now follows a Paleo diet, avoiding all dairy, wine, and wheat, and the benefits in reducing the inflammation in her body have been immediate, not having needed an operation in the past ten years.

In making the writers present participate in the food preparation, they were committed. We got to meet the FitChef team and their charming PR company representative Magdaleen Duvenhage from Brandfluent in Johannesburg. We had a very healthy dinner, and left inspired to prepare these easy-looking dishes and to eat more healthily!  As Banting is the talk of the town, Banters are catered for in the FitChef food range too.