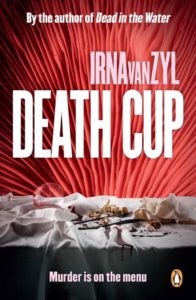 Last week I found a reference to my name in a review written about author Irna van Zyl’s second book, called ‘Death Cup: Murder is on the menu’, a play on words with a mushroom by the same name, naming me as the model for one of the main characters in the book, as the writer of the ‘infamous food blog’. As I had been told this verbally on another occasion too, I had to go to Exclusive Books to buy a copy of the book. There is no mistaking the blog of the ‘food blogger’ as being my WhaleTales Blog!

The book is fiction, but a number of mentions are the truth and real, such as Eat Out (with a listing of the top 500 restaurants in the country), Chef Reuben Riffel, Chef Kobus van der Merwe and his Wolfgat restaurant, Chef Jamie Oliver, food writer and columnist Sam Woulidge, The Test Kitchen and its owner Chef Luke Dale-Roberts, and La Colombe.

The Book tells the story of a murder of the ‘food blogger’ Sandra Dippenaar in a top rated restaurant outside Hermanus, initially thought to be the ultimate revenge for a harsh review written by her about the restaurant, poisoned by a Death Cup mixed into her mushroom dish. As this happens right up front in the book, one would imagine that there was not much more to say about the ‘food blogger’, but Van Zyl cleverly, and with heightened tension, builds the murder of a waitress at the same restaurant, and the attempted murder of its chef as well as of another staff member into the story of the 328-page book, The detective on the case is Storm van der Merwe, and she nearly loses her life too. The pinnacle of the series of murders and attempted murders is the restaurant award ceremony at which the top restaurants in the country will be announced, further action by the murderer being expected.

So why do I think that my WhaleTales Blog is the model for the writing of the ‘food blogger’ :

The murderer is the least expected character in the story, and Van Zyl cleverly creates many interactions between the characters, such as two step brothers hating each other, an affair with the chef, a pregnancy, all of these relationships pointing a finger at a narrow band of suspects. Towards the end of the book, the ‘food blogger’ is almost forgotten, but the murderer’s motive becomes evident, not having anything to do with the harsh review which she wrote. I did find the book boring and drawn out in the middle, when the detective loses one of her dogs, and the story goes on and on about her attempts to find it, rather than focusing her time and energy on finding the murderer, so that further announced murders on specific dates are prevented.

The English translation does not always flow, with some grammatical errors, and the Book is dominated by Afrikaans characters, only those at the Hermanus police station being realistic. Van Zyl gets mixed up, in once calling the ‘food blogger’ a ‘food critic’, the latter not existing. And she forgets to pursue the thread in the story about the ‘food blogger’s’ son Willem who is actually called William, who will meet the detective to hand over his mother’s laptop. Weirdly the author describes him as having a ‘heavy Afrikaans accent’, but he cannot understand the detective speaking to him in Afrikaans, asking her to repeat what she said in English. (My son would not be happy with this description of him). But this is fiction after all, and anything goes.

Irna van Zyl worked at New Media Publishing and was one of its directors, the company publishing Eat Out, amongst many other titles. Her partner is Bridget McCarney, who was the Managing Director of New Media Publishing. Eat Out hosts the annual Restaurant Awards, the 2019 award ceremony being held this coming Sunday. Originally written in Afrikaans, as ‘Gifbeker’, this is Van Zyl’s second book. Both books are set to become a television series, the author recently announced. Van Zyl acknowledges the input from a number of persons, including Abigail Donnelly, a staff member at New Media Publishing, who was the head judge of the Eat Out Awards until 2017. Well-known mushroom guru Gary Goldman gave the author insight into mushrooms.

The excerpt in the LitNet review of ‘Gifbeker’, written by Nadine Petrick, which alerted me to the book and my ‘role’ in it, and mentioning me by name but getting the name of my Blog wrong, is the following:

I have used the ‘food blogger’ description of Sandra Dippenaar by the author in inverted commas throughout, as if that character was intended to represent me, it is the wrong description! I call myself a Restaurant Writer! After reading this book, I will be avoiding ordering mushrooms in restaurants for sure!

For anyone wishing to get a taste of what’s cooking in the local restaurant industry, and particularly what stress restaurant reviews cause chefs and their teams, and even more so, what stress restaurant staff endure when Eat Out judges come to eat at their restaurants, Van Zyl’s Book is perfect, a cannot-put-down with its climax ending. I am highly flattered that my Blog is receiving this recognition, and for the insight which Van Zyl’s Book has given me about how New Media Publishing views my Blog and me.

POSTSCRIPT 13/11:  I received this message from author Irna van Zyl this morning: ‘Hi Chris I’m glad you found the book interesting and thanks very much for the review. Looking forward to seeing you at the awards on Sunday’.