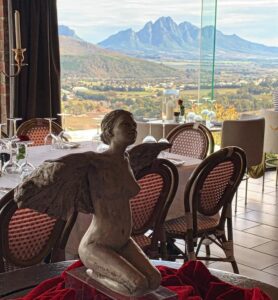 On Youth Day my friend Justin Miller and I took a road trip to Franschhoek, packing in a shopping stop at Dalewood Fromage and at Babylonstoren, a stop at Country Grand, and walking the main road of the village from bottom to top and back, to record all the restaurant changes that have taken place since I last visited in 2020.

I did some additional research to find details of any other restaurants that have opened or closed since I last visited the village.

We found it surprisingly quiet in Franschhoek for such a good weather public holiday. The busiest 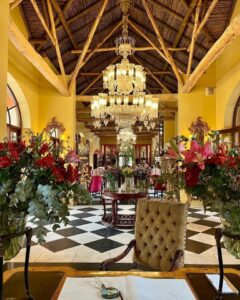 restaurant by far around lunch time and the afternoon was Country Grand at Dieu Donné.

Our highlight was afternoon tea at the colourful La Residence, a tranquil and beautiful ending to our Trip, meeting the new Food & Beverage Manager Mark, and enjoying Nigiro Earl Grey tea and some of the Afternoon tea leftovers, including scones, jam, cheese and divine whipped cream, cucumber sandwiches, mini cheesecakes, and mini carrot cakes.

Restaurant changes are the following:

#.  Country Grand at Dieu Donné  : It was previously Roca Restaurant, its owner having allegedly run off with debts left behind. It has one of the best views in Franschhoek, being at the top end of Uitkyk Street. The restaurant belongs to Life and Brand, sister restaurant to The Grand on the Beach in Granger Bay, and The Grand in Plettenberg Bay. The restaurant group also owns La Parada, Tigers Milk, Old Town Italy, and Harbour House restaurants. It opened three months ago. The interior is a mix of the well-known cane chairs and some ultra modern white leather chairs with the Grand logo on the back of each chair. It is a popular wedding venue. Pizza, pasta, seafood, steak, burger, and desserts on the menu, all appear standard Grand fare. (Photograph above).

#.  Esquire Grill & Bar: The venue at Place Vendome at the entrance to the village has housed a 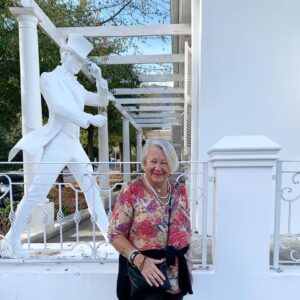 number of restaurants, and is now a venue for dinner theatre, live music, and lunch and dinner, catering for locals and visitors. Menu offers classics such as Steak tartare, Avocado Ritz, Pizza, steaks, pasta, burgers, seafood, and desserts. Open Wednesdays – Sundays. Owned by Riaan and Tamlin du Plessis. I loved the Johnnie Walker statue outside the restaurant.

#.    Blue Coriander Indian Restaurant: Also in Place Vendome, the owner is a Chef who used to work at Marigold Restaurant high up on the main road of Franschhoek. Licensed. Available for sit-down and take-away.

#.  Let’s Frites : In the former Foliage building, and jointly owned by Chefs Reuben Riffel and 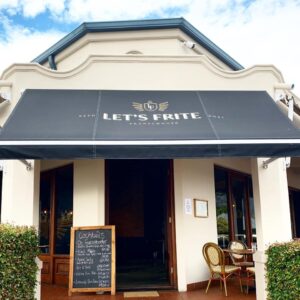 Aviv Liebenberg, with a silent partner. Plans are to roll out the restaurant in other areas, including Stellenbosch. Burgers, very good chips, and squid. We were starving, so we did a stop here, sharing a squid and chips dish at R105. Chef Aviv came to chat, and gave us an update on where he has worked since we last saw each other in Robertson many years ago.

#.  Smitten :  an absolute highlight and the most stylish restaurant in Franschhoek. Owned by Chef and TV 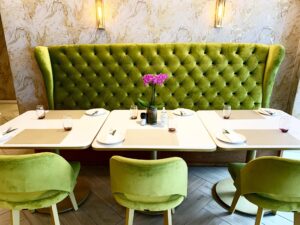 cooking show host Chris Smit, in a space in The Yard once home to the Salmon Bar and an art gallery. Lovely to see Desiree there, who used to manage the Salmon Bar many moons ago. Desiree showed us the stylish Champagne Bar and Beauty Salon next door too. Closed Mondays and Tuesdays. Delicious looking selection of cakes. Bistro, Deli, Bakery, and Bar. Breakfast, Lunch.

#.  Mon Amour: the most colourful restaurant I have ever seen, in a space that once was a 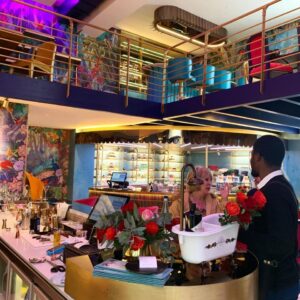 Melissa’s and Café Roca. Pays homage to ‘Parisian Café Culture where everyone is invited to immerse themselves in a dimension of deliciousness’. Sells roses. Champagne Bar. Tuesdays – Sundays.

#.   Terbodore Café (new location): previously on the outskirts of Franschhoek, much reduced in size inside, but tables outside too. Does not have the charm of its previous location. No owners present.

#.   Starbucks: One of the biggest shocks was discovering this coffee outlet on the main road!

#.  Good Food & Co Deli: one of the first outlets to open in Place Vendome, it moved to the Bijoux centre but closed down soon thereafter, I was told.