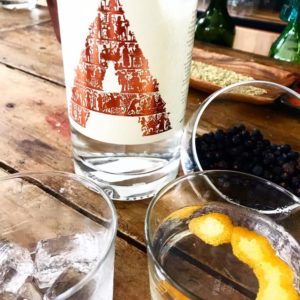 About three weeks ago I visited Franschhoek for the day, and saw an amazing collection of brand new SA gin brands at Siegies on Huguenot, all being striking in being unknown to me, and each having very distinctive packaging. Autograph Gin was one of these, and it was one of the brands which I photographed and posted on Instagram and Facebook. On Monday I ‘met’ the brand and its Master Distiller Matt Beech, at the Autograph Distillery in Stellenbosch, a goosebump experience, the second of my day!

Not having seen my Facebook and Instagram photograph posts about Autograph and the other new local gins, it was an amazing coincidence that Mark McCarthy messaged me a few days later, to tell me that he had left Inverroche Distillery, and had moved to Autograph Distillery at Bosman’s Crossing in Stellenbosch, handling its sales and marketing. He told me that the co-owners of the brand are Anthony Naughton, a competition lawyer, and Marcel von Aulock, of Tsogo Sun. I have never met Marcel, but I know his father and his late grandparents, our parents having been very close friends. Mark promised to try to set up a meeting with Marcel when he is next in Cape Town, so that we can meet. Mark also whispered to me that despite it being a brand new gin brand, Autograph had done very well at the Michelangelo International Wine & Spirit Awards 2018, but he could not yet reveal exactly what they had won. Subsequently he shared that a 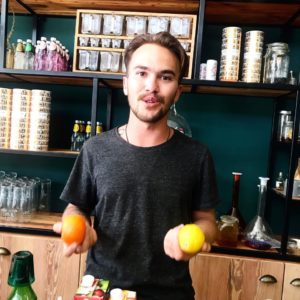 week ago the brand had won Best Scoring Craft Gin in our country. To spike my interest, he told me that the award-winning gin had been made by 2o-year old distiller Matt Beech, the youngest gin maker in our country.

I had invited my Parisian friend Aurélie Jullien to join me on my trip to Stellenbosch, to visit Quoin Rock winery to hear more about its new restaurant Gåte, opening next month. We were heading to Jordan Winery, and saw Pane e Vino from the road on which we were travelling, and I spontaneously suggested that we have lunch 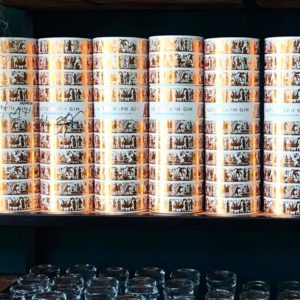 there, in Bosman’s Crossing. Only while we were having lunch did I remember Mark’s invitation to see the Autograph Distillery should I be in Stellenbosch. I called Mark, and it was disappointing that he was in Johannesburg. I told him where we were, a few doors away from Autograph. He invited us to visit the distillery, and said that Matt would show us around and do a tasting with us. We did exactly that, and we were blown away by the passion of 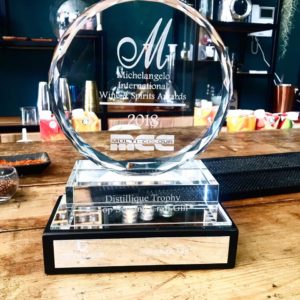 Matt for his Autograph brand, and how friendly he was to us, sharing so much interesting information about his brand. Matt proudly showed us the Michelangelo International Wine & Spirits Awards 2018 Distilleque Trophy, for the ‘Top Scoring Craft Gin’, scored at 96 out of 100.

Matt introduced himself to us, as having been at St Stithians Private School in Johannesburg. He chose to travel rather than to study after matric, so he traveled to LA, living in a yacht, and making money by becoming a barman on another yacht, learning to mix cocktails. He met Brandon Kerzner there, son of hotelier Sol, who owns some bars in Cape Town and he invited Matt to contact him if he needed help to get a job in our city on his return. He did exactly that two years ago, and Caprice in Camps Bay was one of his first local bar experiences, becoming its Head Barman. He and a group of friends with a similar interest started up new bars. Matt participated in international bar tending  competitions, such as World Class, focused on creating cocktails. 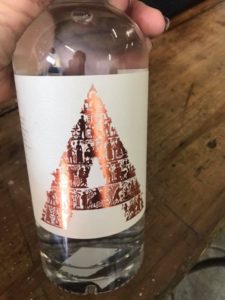 Autograph was birthed in 2016, its pack design taking some time to come to fruition, before Matt’s association with the brand. Through a family connection, Matt and Anthony connected, and met in Stellenbosch, at the previous distillery premises of the brand. Local Gin maker Roger Jorgensen had assisted in creating a recipe for Autograph, but it had not been made yet at the time that Matt joined a few months ago. Matt had to learn distilling. He used Roger’s recipe, but tweaked it here and there, until he was happy with it. Matt said that he loves the ‘Theatre of Spirits’, Spirits drinkers being fascinated in watching bartenders creating cocktails. It appeals to his love for arts 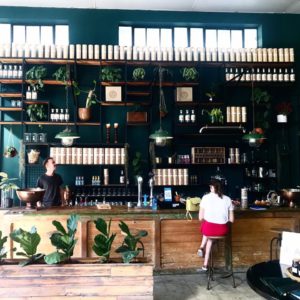 and drama, a favorite school activity after a sport injury.

The choice of the Autograph name is motivated as follows: ‘The products are crafted with meticulous care and detail. It’s a brand that master craftsmen would be proud to attach their signature to’.

Matt explained that a London Dry Gin has three base elements : juniper berries, Angelica root, and coriander. Autograph has a London Dry Gin foundation, but Matt prefers to call it an Africa Dry Gin, the terroir of the Gin being Stellenbosch generally and Jonkershoek specifically. The Botanicals and fynbos in the Gin include naartjies, Cape roughskin lemons, citrus Buchu, wild rosemary, confetti bush, and African wormwood. They have hand-crafted 1400 one liter and 2500 750 ml bottles tondate. We were introduced to ‘Zoë’, in which the Gin is distilled. Matt explained that 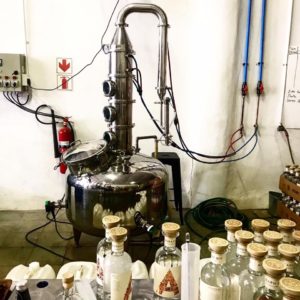 the top and tail of a gin, which contains methanol, is not used. The mid-section is called the ‘heart’ of the gin, at a temperature range of 78 – 86 C. ‘Craft gin’ is called that because each new distilled batch is matched up to the previous ones as best possible but can never be duplicated 100%.

The pack design is exquisite, not only on the bottle, but also in the cylinder in which one buys it. It was designed by Brandt Boytes of Old Friends Young Talent, a Design hub which draws in talented designers as per need and talent. Inside the letter ‘A’ on the pack the international history over 1000 years of gin in general is 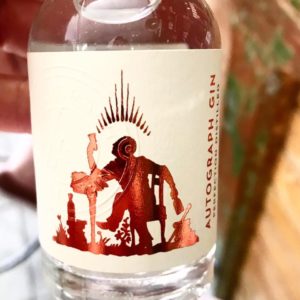 depicted, explaining that Autograph embodies the ‘timeless tradition encapsulating years of passion, inspiration and discovery’. The following quote encompasses the name choice, becoming reality so quickly for this very young brand: ‘Success is when your signature becomes your autograph’. The Autograph brochure that accompanies the gin bottle in the cylinder pack describes the brand as follows: ‘This is Africa’s most exclusive, premium dry gin’.

The origin of gin has been traced back to monks, who crafted liquids by heating wines, to learn more about the ‘waters of life’, in the 11th and 12th centuries. The gin name is traced back to the Dutch ‘jenever’ and French ‘genievre’. The Black Plague of the 14th century turned gin into a medicinal remedy to ward off the plague. The liquid was refined by the Dutch in the 15th century, creating juniper-based distilled infusions. In the 17th century juniper-based cordials were available in pharmacies to treat gastric and kidney ailments. In the same century gin became a drink said to give ‘Dutch Courage’ to British soldiers in the Thirty Year War between that country, Spain, France, and Holland. In the 18th century gin took off, and to meet demand, it was made in every possible manner, often having a blue colour if of poor quality, referred to as ‘blue ruin’. The love of gin by women led to the description of the drink as ‘mother’s ruin, and ‘ladies delight’. In the 19th century ‘London Dry Gin’ was created as a descriptor, resulting from the stature of gin, a respectable drink of the ‘gentlefolk’. In the 1920’s gin became the drink of the rich and famous, a glamour drink. In the 1950’s it experienced a surge of popularity when James Bond drank a martini, a Casino Royale with gin, vodka, and vermouth, shaken and not stirred! It became the name of the movie too. Ending the story of gin, the brochure concludes with Autograph: ‘Every drop is curated by hand, each sip is an expression of 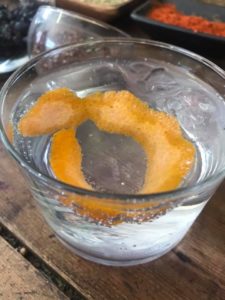 shared pleasure and passion – the finishing touch of the story of gin’!

Three Autograph Gin tasting options are available: Distillery Tours; The Story of Gin and the nine stages of cocktails; and the Gin Making Experience.

We left Autograph with a bought bottle of this special gin, absolutely impressed with the young Master Distiller Matt and his award-winning Autograph gin, and his passion and enthusiasm for gin and his brand. An Autograph Pink Gin is planned next, hibiscus giving it its colour.