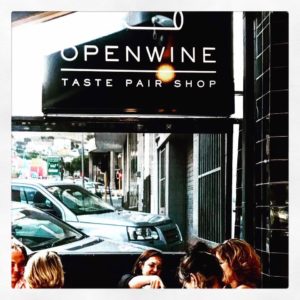 Every week OpenWine introduces the top wines of one of its wine brands, at a tutored tasting on Tuesdays. It is a fantastic way to learn more about a wine estate in an hour. Last night Georgie Prout, Marketing and PR Manager of Glen Carlou, introduced four wines with her Regional Sales Manager colleague Elize Barnard. 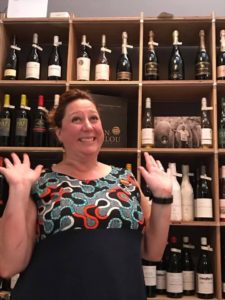 Donald Hess. Georgie told me that a trio of investors (the Pactolus Consortium) now owns the wine estate, under the chairmanship of Wayne Pitout. Winemaker Arco Laarman has left the wine estate, making his own wines now, and Johnnie Calitz has taken over as winemaker.

It was an incredibly small world bumping into Manfred Roschi at the tasting, a guest who regularly stayed with us at our guest houses in Camps Bay and Hermanus. He lives in Bern when not now living in Cape Town, and he told me that Hess has a wine shop in his home town, where he sells the wines from his Australian, French, and Argentinian wine estates. He has a gallery at each wine estate, displaying his private art collection. His collection at Glen Carlou has been removed, but Georgie told me that it has been replaced by a contemporary South African art collection.

Three of the four wines we tasted were Chardonnays:

Georgie told us that former winemaker Arco had bought in egg-shaped cement tanks, which he used to make this Chardonnay. The yeast moves in these tanks, creating a natural batonage. The wine has a creamy palate, giving a fruity flavor of lemon and white peach, has high acidity, and is well-balanced. It is ideal to drink on its own, or with Asian and Indian dishes. The wine can be stored for a number of years. 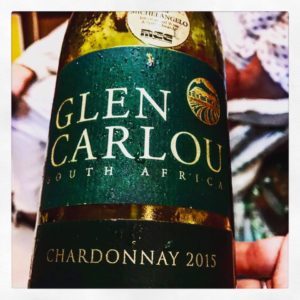 The wood was immediately detectable on the nose. Georgie told us that Glen Carlou is renowned for its Chardonnays, and this Wooded Chardonnay is synonymous with Glen Carlou, called the ‘Green Label Chardonnay’. The first Chardonnay was made in 1988, by the first Glen Carlou winemaker Walter Finlayson. Walter introduced Burgundy and Bordelaise style wines to Glen Carlou. The Chardonnay vines come from rootstock which was imported from France. It is 100% French oaked, and they use up to 5th and 6th fill barrels. It has a light lemon curd taste, and a balanced acidity. It is a popular wine on winelists. Elize told us that the grapes are picked over a three week period, to give a balance of early and late sugars. 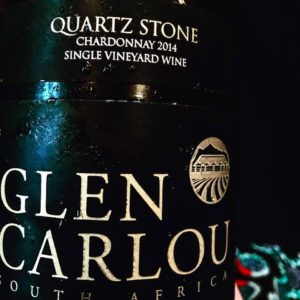 Georgie described this Chardonnay as their ‘flagship‘, grapes coming from a single vineyard. It is the oldest vineyard on the property, dating back to 1985. Walter’s son David Finlayson identified the vineyard as the best in the wine estate. The first vintage of the wine was produced in 2004. It is 100% barrel fermented. Georgie explained that the barrels come from France, and are steam bent, releasing more tannins from the toasted barrels, making them less oaked. The wine has tangerine marmalade flavour, with hints of nuttiness. The acidity is well-balanced. Cork is used for this wine, the market placing pressure on this closure method, given that the wine costs R275. Screw caps are used for the other two Chardonnays. They produce 1000 Quartz Stone cases of twelve bottles annually. 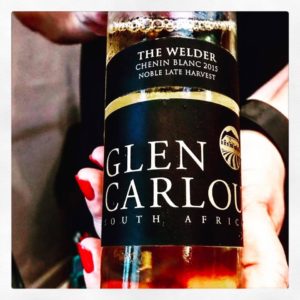 It was explained that former winemaker Arco’s name related to arc welding, and hence he received the nickname Arc, and the wine was named ‘The Welder’ after him. It was made by Arco for the first time in 2008, in celebration of the 350th anniversary of winemaking in our country. Half of the vine canopy is opened to the sun, and the other half is in the shade, a yin and yang giving a clean sweet style of wine.  It was suggested that this wine be paired with cheese, an aged Brie or Camembert, a Gruyere, or a Dalewood Huguenot or Boland, the latter cheesery being located close to Glen Carlou. It was also described as an ideal breakfast wine, served with creamy scrambled eggs, smoked salmon, and brioche. The wine has flavour of peaches and nectarines with honey, and only has 10% alcohol.

Wine lovers were invited to visit Glen Carlou, which is open seven days a week for wine tasting, meals at their restaurant, and viewing of their art collection.