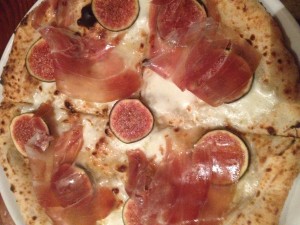 On Thursday evening I attended the launch of the South African leg of the Global Pizza Challenge, a project which belongs to Chef Arnold Tanzer from Johannesburg and  Martin Kobald from Australia.  South African pizza makers have done well in the past seven years of the competition.

I almost did not make the function, which was held at the offices of Dish Food & Social,  giving us a street address of 423 Main Road in Observatory. A building marked 423a on one side of a Shell garage was visible, but not the street number on Main Road that we were searching for in the near dark, which turned out to be on the other side of the petrol station.   To complicate matters the entrance gate is in a side road off Main Road!  Having survived the panic of finding the venue, it was great to catch up with Chef Arnold, whom I had met last year on a Media Day for MasterChef SA Season 2 at Nederburg.

Before we got into pizzas, we caught up about Season 3 of MasterChef SA, which is being filmed at the moment and will continue until June. The series will be broadcast from August onwards.  Chef Arnold did not answer all my questions, such as 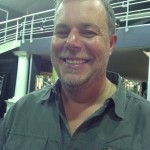 if there would be two broadcasts per week again as in Season 2.  He would not discuss how strict new MasterChef SA judge Reuben Robertsons Riffel is with the contestants, given that he may not want to rock the boat!  We talked about the very honest and harsh review by Chef Arnold of Aarya, the Montecasino restaurant, the use of which Deena Naidoo won for a two year period in winning MasterChef SA Season 1.    We chatted about how low key Season 2 winner Kamini Pather is, not being visible,and not (yet) having created her planned food communication channel, as she announced when she won.   As before, there will be guest chefs.

The Global Pizza Challenge is about promoting and encouraging culinary innovation, given that pizza-making is in a growth phase.  There is a ‘lot of bad pizza out there’, Chef Arnold said to explain why they want to raise the standard of pizza making.   Entrants from 16 countries are invited, including Australia, South Africa, Singapore, UAE, Thailand, Namibia, New Zealand, and China.   The South African finals will be held at Hostex Cape Town this year, running from 21 – 23 May.  The location of the South African final is alternated between Cape Town and Johannesburg.   Entries are now open for the favourite pizza recipes of pizza makers in restaurants, stand-alone pizzerias, takeaway outlets, and hotels.  A panel of South African Chefs Association (SACA) judges will evaluate the entries based on the recipes, 30 finalists will be announced, and thereafter the cook-out will take place at Hostex.  Hundreds of entries are received  in one or more of five categories: poultry or meat, seafood, vegetarian, speciality or dessert, and Tabasco, featuring a sponsor brand and carries a prize package of R10000 cash specifically.   Pizzas will be judged on their originality, balance, creativity, and  their  ‘excitement factor’.  The local  pizza winner will be flown to Melbourne to compete against 15 other regional winners in the international 2014 Global Pizza Challenge finals. 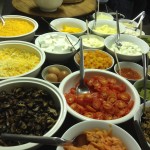 The Global Pizza Challenge is not only an opportunity for a pizza maker in a local pizzeria to make his/her place of work famous, but to promote pizzas’ popularity.  Tammy Henton, a la carte chef at the Michelangelo Hotel at the time, won the South African leg last year, and came second in the international challenge, with her unusual sticky pork pizza.  Tammy attended the competition launch, and was the judge of the best pizzas made by those attending.  A collection of some known and some unusual savoury ingredients was available to put onto the pre-prepared pizza bases, including chicken, feta cheese, cheddar cheese, mushrooms, salmon, tomato, eggs, biltong, basil pesto, duck, peppadew, olives, mango, ricotta, and more. No pork was available.  Only one pizza maker chose to make a dessert pizza, utilising Nutella 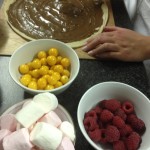 to spread on her pizza base, then covered with chocolate chips,  pink and white marshmallows, and raspberries added after cooking the pizza.  Unfortunately the lighting in the vast room where the pizzas were evaluated and eaten was very poor, making photographs come out out yellow/green.  We have therefore used a photograph of the pancetta, burrata, and fig pizza which I enjoyed at Burrata after the launch (main photograph).   Chef and MasterChef SA judge Pete Goffe-Wood as well as Bread & Wine’s Neil Jewell have been past entrants and South African representatives.   Pizzas featured in MasterChef SA Season 2, an episode which was filmed at Maiden’s Cove in Camps Bay, and judged by food bloggers.   Chef Arnold’s favourite pizza is Margherita with fior di latte.

Kobald, who is also Honorary President of SACA, and UN World Food Program Ambassador – Africa, said that the South African culinary industry’s innovation and expertise comes out at the local Finals.   Every year the pizza benchmark in the country is upped by the range of delicious pizzas entered in every category.

It will be interesting to see what new pizza ideas will be presented at the Global Pizza Challenge South Africa cook-off next month.