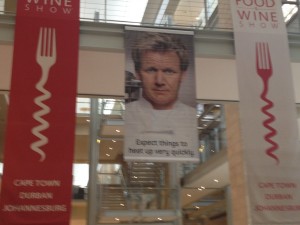 This year the Good Food and Wine Show has new owners, Fiera Milano Exhibitions Africa, and in some respects little has changed, yet it felt as if most of the show consisted of theatre demonstrations, most of which has to be paid for in addition to the R110 entrance fee. Controversial Celebrity Chef Gordon Ramsay certainly is the main attraction of the Show.

At the entrance to the Show, where one buys the tickets, Ramsay’s poster attracts attention, the only visual that indicates that the Cape’s main food show is inside the doors of the Cape Town International Convention Centre, running until Sunday.  As one walks through the hall, one quickly gets to the ticket office selling tickets for Ramsay’s demos, as well as his books.  Thereafter one sees the queue, waiting patiently to get into his demo.  I asked a Capetonian how much she had paid and why she wanted to see Ramsay.  She said that she had paid R250 for the ‘cheap’ show (and not R950 for the VIP version, she said with derision) and that her son wanted to see Ramsay, costing her R720 for the tickets and entrance alone.  Where we walked, we saw stands set up for demonstrations, some larger, some smaller.  The Checkers Celebrity Chefs Theatre was curtained off, one hearing the cheering when Ramsay arrived to put on his show, and for many it was more of a comedy club than a serious cooking demonstration. Ramsay hosts the 11h00, 13h30, and 18h00 slots today, and 11h00, 13h30 and 16h30 slots on Sunday.  Other Celebrity Chefs on stage this weekend are Australian restaurateur Bill Granger, master pâtissier Eric Lanlard, and twins Isabella and Sofia Bliss of Junior MasterChef Australia.  ‘Giggling Gourmet’ Jenny Morris and Rooi Rose Food Editor Vickie de Beer will do presentations on ‘Decadent Desserts’ at the Häagen-Dasz and Pillsbury stand. Chef Eric Lanlard and a number of other local baking specialists will be on show at the Golden Cloud interactive theatre.  Spar has a Wine & Canapés Theatre, while Spekko sponsors a ‘Tafelpraatjies‘ Theatre with talks by leading Afrikaans food presenters. 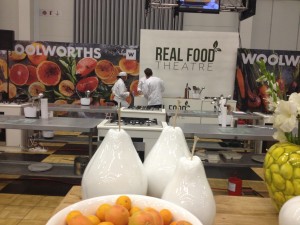 with its branding.  It was one of few stands that did not charge for attendance, accepting attendance on a first come first served basis.  At the time we came across the Theatre, Chef Christiaan Campbell from Delaire Graff was setting up to do his demo, and 12 volunteers from the audience were requested to prepare his menu of a starter of Cured eye of pasture-reared silverside with parmesan and radishes, and a main course of potato gnocchi and mushroom sauce.  Chef Christiaan 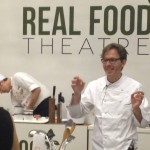 described his menu as being terroir-driven, the silverside having come from grass fed pasture beef from Greenfields in KwaZulu-Natal, and the baby radishes from Farmer Angus at Spier, having grown in their compost heap, Chef Christiaan explained.  Lorraine Bourgogne, our intern from Reunion, volunteered to cook at one of six stations, and Chef Christiaan had his hands full to teach his new ‘students’ how to make his dishes, viewed by the audience. They were lucky to take their creations home with them. Chef Peter Tempelhoff of The Greenhouse, Bill Granger, Tamsin Snyman, award-winning food bloggers Anel Potgieter and Nina Timm, and Rebecca Hurst will do demos this weekend at the Woolworths stand.  The Woolworths Little Chefs Kitchen has hands-on workshops for children by Chefs Peter Tempelhoff, Christiaan Campbell, and Isabella and Sofia Bliss this weekend.

For the rest there were some interesting small stands, the Las Paletas artisan lollies stand attracting 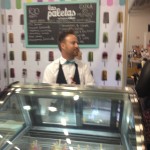 attention with its attractive stand design, despite its small size.  Jason Sandell’s wife Diana Chavarro is from Colombia (they met in London), and the name of their business is the Spanish for …’ice lolly’.  Diana has a marketing background, and it shows in the attractive design of the stand, and its marketing material.  The ‘business card’ is a lolly stick, which contains their contact details!  They are usually to be seen at the City Bowl Market on Saturday mornings.  What makes their lollies so special is the unusual taste combinations, e.g. strawberries and cream, guava and cheesecake,  pomegranate lemonade, strawberry sorbet, coconut lemonade, kiwi sorbet, raspberry, yogurt and kiwi, spiced mango, peanut butter and jam, roast banana, granadilla gelato, and 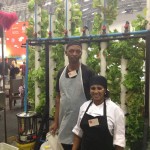 brownie cheesecake.  An unusual design feature, and reflecting the green trend, was Moyo’s lettuce lattice screen, separating the food preparation and serving areas! Chocolates by Tomes is offering excellent Show prices, one of the best chocolate-makers in Cape Town.  Denise’s Delights sells delicious cupcakes at only R10.  The super friendly mother and daughter team of Erica and Ursula at the Puglia stand very kindly handed me a stracciatella mozzarella tub, knowing my weakness for their product.  The Lebkuchen stand connected with my German roots!  Paging through the Show booklet afterwards, we were surprised about how many stands we did not see, yet we felt we had walked up and down every aisle!

The alcoholic beverage section of the show is disappointing, and seems an unexciting side of the exhibition, tucked away at the far end, and not blending in nor ‘pairing’ with the food in the rest of the hall.  Graham Beck partnered its MCC with Bentley’s Oyster Bar & Bistro, the only such food and wine pairing we saw.

What was extremely odd was seeing a number of stands that had no relationship to food or wine: DStv could be understood to be there, as a sponsor of the Checkers Celebrity Chef’s Theatre, but looked like a massive decoder sales showroom. Even weirder was the rather large Ariel stand 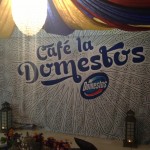 , marketing the washing powder! But oddest of all was ‘Café la Domestos’, an Eastern-style table setting low on a tile floor, to represent that Domestos is such a safe and good cleaner that one can literally eat off the floor!  Hence their taste treats (one could choose between salmon or labneh) were served on white tiles, a bizarre mental leap!

The Woolworths demo stand was the highlight of our visit, and is centrally located in the exhibition hall, allowing one to make a stop here to attend one of the demonstrations, or even better, to participate in one, without charge.  One should bring along enough cash to give into the temptations throughout the Good Food & Wine Show!

7 replies on “Good Food & Wine Show is a theatre of food! Gordon Ramsay star of the show!”