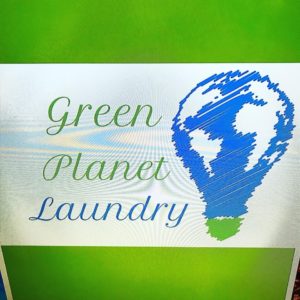 We are invited to many events, and initially I thought that driving out to Airport Industria for the media visit to Green Planet Laundry last week was not something I would write about on my Blog. I was so impressed with the brand new water and electricity efficient industrial, commercial, and residential laundry operation that I would like to give it credit.

We were welcomed and shown around by Green Planet Laundry MD Tony Soares, having been 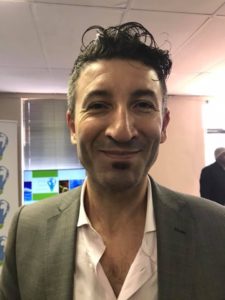 invited to the event by Little Black Book owner Marina Nestel. Whilst difficult to find as there is no signage on the building, the exterior of the building could not have prepared us for the high-tech operation 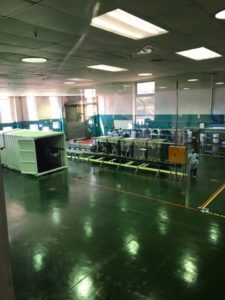 On arrival we were asked to wear a hair net and a plastic shoe cover, a surprise that a commercial laundry operation has such high hygiene standards. Tony very kindly removed his hairnet for the benefit of the photograph. Tony shared his background with us, being of Portuguese parentage and born in Brazil, and having grown up in Worcester. He has been an air traffic controller, a job that has a sell-by date in terms of age, so he and some colleagues started Phat Food & Wine in Worcester. Tony explained that the Worcester clientele is demanding, wanting everything for close to nothing, They thought that if they could crack this market, they will be able to extend the restaurant to other areas in future, a Winelands branch coming soon. This lead to the corporate name Phat Group of Companies, which includes Green Planet Laundry.

Blue Planet Laundry was created, after seeing a gap in the market to create Africa’s only commercial laundry which is off the municipal water grid, words to this effect forming the company slogan, and proudly presented on the collection/delivery vehicles. The dire drought and water shortage in the Cape is a perfect platform on which to position the laundry.

Tony explained the uniqueness of the laundry to us, in having three major components to its 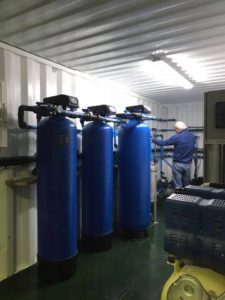 #.  In order to gain water for the washing of the laundry, two 10000 liter rain water tanks will be installed outside, not only catching rain water, but also fed with water catchment pipes, with water that is collected on the roof and in gutters and downpipes.

#.  This water is augmented with water from two boreholes on the property. However, the borehole water is far from clean, and therefore they have set up a recycling plant inside their factory, taking the water through five filtration processes (blue containers in the photograph on the left), to create drinkable water, and hence usable in the laundry.

#. The water that is expelled from the washing process is also recycled, and 50% of the grey water is used again in a similar fashion to that which comes 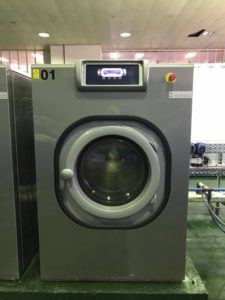 from the boreholes, in being recycled again.

The water filtration equipment cost R700000 to set up. Oxygen is added to the recycled water. Solar panels on the factory roof reduce the electricity usage. 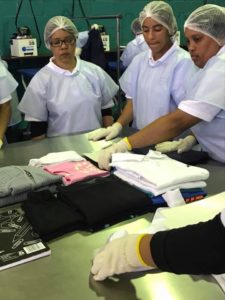 washing machines from Italy, which recently won an award for the most water and energy-efficient equipment. They also use some LG semi-commercial washing machines. Tony told us that they support the principle of recycling to such an extent that they even use recycled furniture in their operation as well as offices.

I was extremely impressed with the attention to hygiene and care for the laundry entrusted to Green Planet Laundry, in that staff ironing the clothing, and those folding non-ironing items, wear gloves, hair nets, a plastic over-coat, and shoe covers, to minimize any chance of dirtying the garments and any other items that they work with. The Mayor’s Office has contacted the Laundry, and the Mayor has expressed interest to visit Green Planet Laundry.

The water-efficient Laundry is attracting the attention of the local accommodation establishments, which are under pressure to assist Cape Town and surrounding areas to use water as efficiently as possible, in their own operations, as well as in the usage of water by their guests.