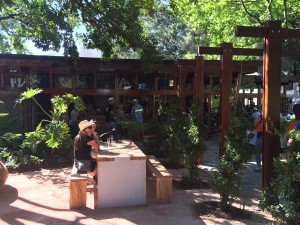 Social activist Zackie Achmat has managed to get the name of Haarlem & Hope changed to The Company’s Garden Restaurant, three weeks after its opening earlier this month, after he complained that the original name included reference to the Haarlem ship, which brought the first slaves to the Cape!

Achmat wrote angrily: ‘I wish to register my anger and outrage against this unthinking, callous celebration of colonial power. The indigenous Khoi and San people faced genocide. Colonialism is part of our history. We can’t turn the clock back. But many white people’s failure to acknowledge the pain and injustice of colonialism, apartheid and capitalism angers me not simply because it is wrong, but because they are preparing the seeds of increased social violence‘.

The Madame Zingara Group reacted quickly on its Facebook page, posting the following statement: ‘We’ve come under fire once again! It seems that the choice of the name “Haarlem & Hope” has caused deep offence amongst certain members of the community, as it makes reference to a colonial past. The only reason we tendered for the restaurant in the first place was was to do good and create a positive environment. We are not here to celebrate the past, we are in this business as we are invested in the future – education, skills development and sustainability are the things that matter to us. We have invested a huge amount of energy, as well as funding, into improving the gardens, and from the outset we have wanted it to be an inclusive venue for all to enjoy.

The name is not important to us, it holds no significance in our vision for the space and if it excludes in (sic) anyway, then we are prepared to change it. For this reason, we will be changing the name of the restaurant to The Company’s Garden Restaurant. We are going to try our best to make this happen as quickly as possible, but as the name has been spread widely, it may not happen over night. Much love, as always, Madame Zingara’.

The restaurant group had chosen the Haarlem name after the ship Nieuwe Haarlem, which was shipwrecked in Cape Town in 1647. Its crew planted the first vegetables in Cape Town, Jan van Riebeeck returning to the Cape five years later to set up a refreshment station, which became The Company’s Garden at the top of Adderley Street.