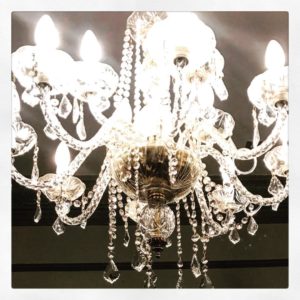 Chef Constantijn Hahndiek is a humble talented Chef, and he continues the standing of Hartford House as the best restaurant in KZN, initially created by Chef Jackie Cameron. In the three years that I have been visiting Hartford House by invitation in winter, his confidence has grown by leaps and bounds since he started working there.

Hartford House is old school, located on the Summerhill Stud farm in the Midlands, outside Mooi River, and is owned by the Goss family. The property dates back 125 years, and has been operating as a  guest farm and boutique hotel for numerous years. Chef Jackie headed up the Hartford 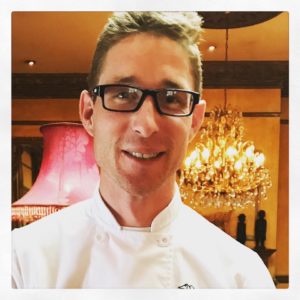 House kitchen for ten years as a young chef, and took it to Eat Out Top 10. In 2015 she opened the Jackie Cameron School of Food & Wine in Hilton. Chef Constantijn had a food journey which started in Cape Town, took him to the U.K., to Café BonBon in Franschhoek, to Fairmount Zimbali, and then to Hartford House. Last year the restaurant was named as a Top 20 by Eat Out, a big honour for the young chef.

Last night I joined the dinner, and my last minute attendance did not challenge Chef Tijn and his team. The dinner was held on the terrace, securely protected against the cold with plastic curtains as well as gas and overhead electric heaters. On the table was a chic silver framed menu, and six sets of cutlery for the six courses, a clever move which prevents staff from having to place new cutlery on the table during the meal, and hence stretch across patrons in doing so, as one experiences in restaurants so often. Manager Kevin arranged with Chef Tijn that I could photograph in his kitchen, 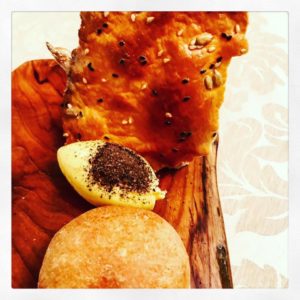 with good quality light. It appears that new cutlery has been bought, and is shiny and new.

Chef Tijn is continuing a Hartford House dinner ritual of reading the Dinner Menu to all guests, and his confidence in doing so has grown admirably, and he has become a natural in welcoming guests. He was honest to us that it can be nerve-wracking to cook a different menu every night of the week. He thanked all diners who were at Hartford House for their love of the good food.

A wooden bread board was brought to the table, consisting of a homemade brown roll with raisins; a lavash with salt crystals, black sesame seeds, pumpkin seeds, and sunflower seeds; and a white roll, all made with stone ground flour, trainee sommelier Sibongile informed. Chef Tijn said that they bake fresh breads three times a day. Accompanying the bread was butter topped with mushroom and truffle powder, too good to resist. 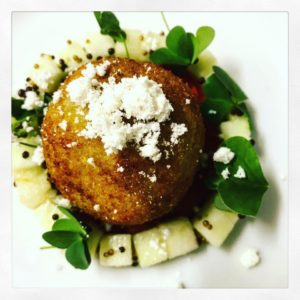 We were offered water and soon our Hartford House Estate Crab Apple Cider 2017 was poured in a small glass, a soft pink colour, and a refreshing not-too-sweet taste.  It was paired with a 12 month matured Boerenkaas croquette, homemade crab apple jelly, sorrel, house made mustard, apple cubes, cheese cubes, and an interesting taste and aroma through Earl Grey smoke added under the glass dome, which was removed when the dish was brought to the table. Chef Tijn told me that he used a champagne yeast in the making of the cider, to give it a drier, less sweet taste. The crab apple trees are outside the terrace, and the jelly was also made by Chef Tijn’s kitchen. Making the cider from the crab apples is ‘a labour of love’, he said, but reflects the dedication he has in sourcing produce from his garden 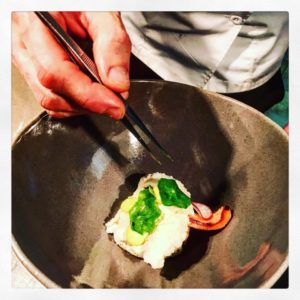 Course two was exciting, although I was initially apprehensive about eating Natal Snoek, also called Queen Mackerel, which had been cured for four days. It has lovely pink meat, and did not have a strong salty taste as our Cape Snoek has. It was accompanied by poached guavas, a strong pink colour too, and a most unusual guava broth, baby calamari, with fresh radishes, and a puffed wheat crisp. This course was paired with the Newton Johnson Felicité Pinot Noir 2016, with a very earthy taste. I discussed Fish knives with Chef Tijn, and he told me that they are still searching for a good set. 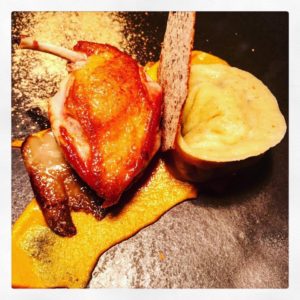 From a company called Artisan Meats Hartford House sources ‘incredible‘ quail, said Chef Tijn, even though his staff had to pluck the feathers and trim the birds. The quail was served with burnt carrot purée, pickled carrots, carrot tortellini, carrot powder, and a carrot crisp. The dish was paired with a barrel-fermented Lismore Sauvignon Blanc 2014, with a strong taste of oak, unusual for 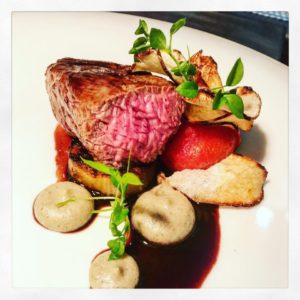 a Sauvignon Blanc. It was scored 92 out of 100 points by Decanter.

Course four was extra dry-aged wildebeest fillet sourced from Zulu Waters, a game farm not too far from Hartford House. The fillet was very soft and tender, served pink. It was served with Aubergine slices which had been brined, making them somewhat salty. Poached tomato and KZN-speciality amadumbies completed the dish. The dish was paired with Rijks Touch of Oak Pinotage 2014. 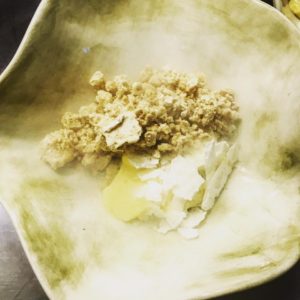 Chef Tijn usually serves a surprise course, which is not revealed to diners when he does the Menu Reading. Last night it was a Latte textures of milk dessert, served with coffee espuma, white chocolate cremeux, and the Latte freeze-dried by means of Liquid Nitrogen, giving it a nice crispy texture. It was served in an exquisite bowl created 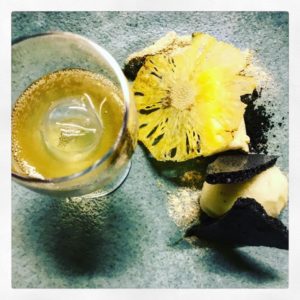 Course six was a study in pineapple, with the thinnest of thin dried pineapple crisp, ash and granadilla juice meringue, pineapple sorbet, coconut parfait, sabja seeds, liquorish crumb, and pineapple sherbet. It was paired with a pineapple beer made by Chef Tijn and his team. My dry cappuccino was perfectly made by Kevin.