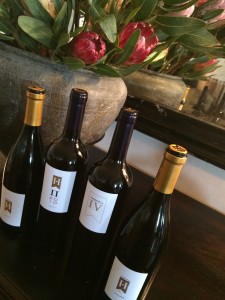 Despite having made wine for ten years at Haskell Vineyards, previously named Dombeya Wines, no more than four vintages of Haskell wines have been made to date.  Yesterday we were invited to attend  a tasting of the complete range of Haskell wines at the home of American London-based owner Preston Haskell in Fresnaye.

Even though it was the coldest day this winter, the inside of the large house was warm and a fireplace added to a cosy feeling.  The Haskell house is right at the top of Fresnaye, with a beautiful view. Haskell said he fell in love with Cape Town and the winelands ten years ago, first buying his house and then investing in the Dombeya vineyard.  Rianie Strydom is a highly respected winemaker, and Haskell and his business associate Grant Dodd are very proud of her.

Haskell is very well connected and used to host Cape Town’s most famous New Year’s Eve party in Fresnaye, until he realised one year that he didn’t know most of the guest attending, and that was the last such party he hosted!  I remembered driving some guests from our Whale Cottage 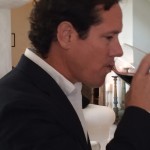 Camps Bay to his house for one such party about eight years ago, and our guests were very excited about Prince Albert attending with his new swimmer girlfriend none of us had heard of, now his wife Princess Charlène.  Haskell saw the couple about a month ago, and heard the good news then already, to explain why Princess Charlène was avoiding the limelight, as she did not want to be seen to not be drinking wine, as this would confirm her pregnancy.  Haskell provided a large quantity of Dombeya wine for the royal wedding three years ago, which he attended, and it has been used for other events too.  Haskell flew in from London directly to the event yesterday morning, and heads for Namibia later this week.  Grant is the Managing Partner of Haskell Vineyards, visiting regularly from the Hunter Valley in Australia, where he is based. Ironically they export Haskell wines to Australia, and therefore I asked Grant why they don’t make wines in that country.  It appears that they almost did, and are grateful that it did not materialise, when the economic recession kicked in.  They export Australian wines to Russia. 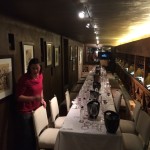 I was late in arriving, having come from the airport, by which time Rianie had done the tasting. On arrival, she showed me the cellar in the long tasting room, and sat down with me, and spontaneously led me through an informal tasting of the wines, even though she had not been asked to do it, a reflection of her professionalism.  She has been with Haskell Vineyards for the past ten years, after leaving Morgenhof, and is its 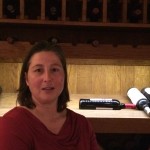 winemaker as well as General Manager.  Her stature in the wine industry is recognised in being one of few women members of the Cape Winemakers Guild.  Initially she made wines under the Dombeya label, which is still made on the wine estate, and in 2010 the first Haskell wines were made.

Rianie took me through their Chardonnays, the Haskell Anvill 2010, 2011, and 2012 (R290), single vineyard.  Aroma of citrus and white peach.  Hand-harvested and 100% whole berry pressed.   Rianie made Shiraz for the first time when she got to Haskell, not liking this varietal for its extreme smokiness in the past.  They have experimented with different single vineyards, to test the effect of terroir on their wines. Haskell Pillars Syrah 2011 was made from grapes grown in soil with rocks and stone (R395), while Haskell Aeon Syrah 2011 was made from grapes growing in soil which has more clay, giving the wine greater spiciness and femininity (R290).  She also had a bottle of the 2014 Haskell Haydes, and told me that they had their first proper Shiraz crop this year.  The Shiraz style has changed over time, Rianie said, now made as per the Rhone style.  The third range is a Bordeaux Blend,  the Haskell IV of 2009 made with four varietals: Cabernet Sauvignon (75%), Merlot (15%), Petit Verdot (5%), and Shiraz (5%), selling at R290; and Haskell II 2010, which is a blend of Shiraz (62%), Cabernet Sauvignon (33%), and Mourvedre (5%), costing R160. Rianie said that the Blend needs a minimum of five years in the bottle to perform at peak.

Rianie told me that she is making her own wine range, to be called R Strydom, a 2012 Bordeaux Blend to be launched at the end of this year.  She grows grapes on her own property. 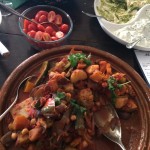 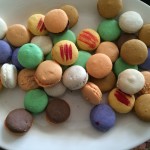 ended off the meal.

Haskell Vineyards impresses with its policy of only using the best grapes in its wines, and only releasing vintages which make the cut.  It experiments with the effect of terroir in its single vineyard sites, and is seeing the results of this in its wines, which they described as their ‘most complete set of wines that we have produced since the inception of the brand’.

Disclosure: We received a bottle of Haskell Aeon Syrah 2011 with our media pack.