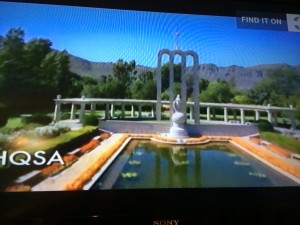 Last night’s episode 4 of ‘Hayden Quinn: South Africa’ was good marketing for Franschhoek, known for its food and wine, combined with its beauty, being filmed on a perfect summer’s day.  There was minimal, if any, Woolworths punting in the episode!

Hayden started his Franschhoek journey at the Huguenot Monument, erected in honour of the French Huguenots, ‘exiles‘ who picked Franschhoek to grow vines viewers were told, a bit of creative licence, as they were given the land.  Hayden explained that the village name, which he pronounced close to perfectly, means ‘French Corner’.  He  said that the monument represents peace, agriculture, and viticulture, copywriting nonsense, as the monument (erected in 1948) represents religious freedom, something the Huguenots could only experience in Franschhoek, having to flee France.  The village was previously called Olifantshoek, after the elephants roaming in the valley. The main road of Franschhoek was shown, and Hayden referred to it as having buildings with ‘French style architecture‘ (sic)!

Surprising to see was the chat with Brett Garner about the Franschhoek Wine Tram, a popular tourism hop-on hop-off 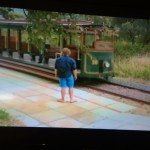 service which was established about two years ago.  It has expanded to include an auxiliary bus service too, including Grande Provence, Rickety Bridge, Holden Manz, Leopard’s Leap, Chamonix, Dieu Donné, La Bri, Mont Rochelle, La Couronne, and Môreson.  The railway line was laid in 1904 by Cecil John Rhodes, to get produce from Franschhoek to Paarl more quickly than by ox wagons.  Biodiesel is used to operate the Tram, generated from cooking oil from the restaurants, 25 liters being used per day.  Brett shared that he wrote about the Tram for his former newspaper, when it first began its operation, and participated in the programme in return for spending the day with Hayden, and a free trip for his family. 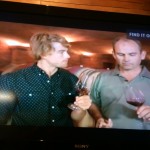 Hayden then went to La Motte, one of the oldest wine estates in the area, which belongs to Hannelie Rupert-Koegelenberg.  He was shown around the vineyards by Cellarmaster Edmund Terblanche,

who explained the WWF Biodiversity & Wine Initiative (BWI), La Motte having been recognised as a BWI Champion, recognisable on wine bottles with its logo of a protea and the sugar bird, demonstrating the symbiosis in nature.  For every one hectare of vineyard that is planted, one hectare of land is under conservation.  Edmund took Hayden to the cellar, and they tried a barrel sample of Merlot, which Hayden described as an entry-level easy-drinking wine, which is ‘mellow‘ and ‘luscious’, some copywriting faux pas reflected! 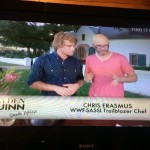 Outside the entrance to La Motte, a table had been set up, where casually dressed former Pierneef à La Motte Chef Chris Erasmus (and now owning Foliage on the main road) and Hayden prepared a dish which became a work of art, inspired by one of our country’s top artists JH Pierneef, in honour of 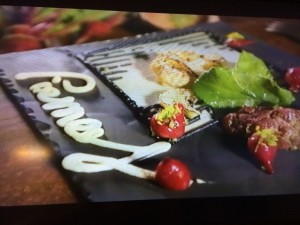 whom a gallery has been set up at La Motte. Chef Chris explained that his dish was a tribute to the painter, using cauliflower to represent the ‘doringbome’ (baobabs) so prevalent in Pierneef’s work.  His ‘canvas’ was a base of cauliflower mash, with a black border created with more mash mixed with squid ink.  To this was added lactic fermented porcini mushrooms, free-range beef, sorrel stems, and roasted baby beetroot.

Hayden went on a cycle ride with a company that offers cycle and wine tours, wearing a WWF T-shirt with ‘Ride for Nature’ on it. They appeared to be at La Motte, as they referred to a hiking path, as well as filming leopards on their camera.  He went to relax at the Le Franschhoek hotel, where he stayed, and swam some laps in the pool to recover from the cycling, surrounded by vineyards! 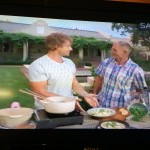 The journey then took them to Fairview in Paarl, the home of goat’s cheese, where Goat Manager Donald Mouton taught Hayden how to milk a goat, with some difficulty, probably meeting his definition of an ‘adventure‘.  The 350 goats are milked electrically in 180 minutes. As the only carbon-neutral cheese producer in the world, Fairview has installed solar panels, which provide 75% of its power requirements.  At Fairview Hayden prepared a Goat’s Cheese Risotto, the first proper dish he has cooked in four episodes in the series!  He lightly toasted the rice in a mixture of butter and olive oil, added finely 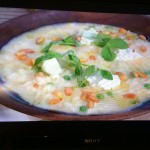 chopped celery, white onion, garlic, thyme, to which he added fresh peas, and crumbled in the cheese.  The dish was topped with more goat’s milk cheese, and pea shoots.  Donald and Hayden drank a glass of ‘BWI wine’ with the risotto, it being odd that Hayden did not mention that the wine was from Fairview!

The episode was a boost for Franschhoek, and many Facebook and Twitter comments reflected the surprise of hearing about the Franschhoek Wine Tram for the first time.  The look of Hayden’s Goat’s Cheese Risotto was also praised.  Funny was when Hayden ended the programme  with a farewell from Fairview, ‘here in Franschhoek‘ he said, getting his geography wrong!  Surprising was that unpopular Le Quartier Français owner Susan Huxter, who likes to describe herself as the unofficial mayor of Franschhoek, was not featured in the episode! Embarrassing for Woolworths was that the hashtag #BoycottWoolworths was trending at the time that the episode was due to start, due to the retailers apparent refusal to remove products made in Israel form its shelves!

The question remains: who is Hayden Quinn, and why was he selected by the production company on behalf of Woolworths to show us the beauty of our country, and its bounty of sustainable foods and wines?  Hayden Quinn is an Australian surfer and former professional lifeguard, ‘WWF-SASSI ambassador’, a ‘cooker’ and by his own admission not a chef, and a 2011 MasterChef Australia top 3 Finalist.   Episode 1 of ‘Hayden Quinn: South Africa’ focused on Cape Town, and made Capetonians proud of their city!   Episode 2 was very disappointing and boring, focusing on Stellenbosch!  Episode 3 was beautifully filmed in Paternoster, and was back on track.