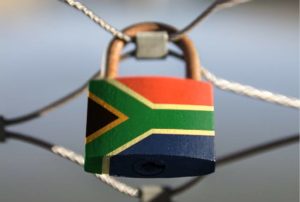 What a surprise to read this evening that Judge Norman Davis has declared the Levels 3 and 4 Lockdown regulations as unconstitutional and invalid, and has given the Government 14 days to make changes to the regulations, News 24 reported this afternoon. The current Level 3 Lockdown regulations remain in force in this period of revision.

The matter was brought to the Pretoria High Court by Liberty Fighters Network, the Hola Bona Renaissance Foundation. and attorney Reyno de Beer.

‘The judgment said the regulations “in a substantial number of instances are not rationally connected to the objectives of slowing the rate of infection or limiting the spread” of Covid-19. The judgment said the government has not produced any bona fide evidence that its means of enforcing the lockdown are “justifiable”, and they can therefore be deemed arbitrary and unlawful. The lockdown regulations go against rights enshrined in the Bill of Rights, the judgment says’.

‘The inference Judge Norman Davis draws after the declaration of a national state of disaster was that little or no regard was given to the extent of the impact of individual regulations on the Constitutional rights of people and whether the extent of the limitation of their rights was justifiable or not. This is according to his judgment on Tuesday, in which he declared lockdown Levels 4 and 3 unconstitutional and invalid.

“The starting point was not ‘how can we as government limit Constitutional rights in the least possible fashion whilst still protecting the inhabitants of SA?’, but rather ‘we will seek to achieve our goal by whatever means, irrespective of the costs and we will determine, albeit incrementally, which Constitutional rights you as the people of South Africa may exercise’,” he said.

He ordered that Minister of Cooperative Governance and Traditional Affairs Nkosazana Dlamini-Zuma within 14 days formulate changes to the regulations. In the meantime, the current lockdown regulations will apply.

Davis, in his judgement, slammed a number of the regulations, saying besides the specific ones cited, “there are many more instances of sheer irrationality included therein”.

He said the regulations surrounding funerals were “not only distressing, but irrational”.

“When a person, young or old, is in the grip of a terminal disease other than Covid-19 and is slowly leaving this life, to ease that suffering and the passing, it is part of the nature of humanity for family and loved ones to support the sufferer. Moreover, there are moral, religious and ubuntu imperatives demanding this,” he said in his judgment.

“One might understand the reluctance to have an influx of visitors should the person at death’s door be inside the doors of a medical facility for fear of the spread of Covid-19, but what if the person is in his or her own home or the home of a family member or friend?”

He said while lockdown regulations prohibited people from leaving their home to visit, up to 50 people “armed with certified copies of death certificates may even cross provincial borders to attend the funeral of one who has departed and is no longer in need of support”.

The “blanket ban” imposed on those working in the informal sector, as opposed to the imposition of limitations and precautions, also appear to be irrational, Davis ruled.

“There are traders, fisheries, shore-foragers, construction workers, street vendors, waste pickers, hairdressers and the like who have lost their livelihood and the right to ‘eke out a livelihood’, as the president referred to it, as a result of the regulations.

“Their contact with other people is less on a daily basis than, for example, the attendance of a single funeral.”

Davis said the limitations on exercise were “equally perplexing”.

“Restricting the right to freedom of movement in order to limit contact with others to curtail the risks of spreading the virus is rational, but to restrict the hours of exercise to arbitrarily determined time periods is completely irrational.”

The practicalities, “or rather impracticalities”, of the distribution of food parcels, “highlights yet another absurdity”, Davis found.

“A whole community might have had limited contact with one another and then only in passing on the way to school or places of employment on any given day prior to the regulations, but are now forced to congregate in huge numbers, sometimes for days, in order to obtain food which they would otherwise have prepared or acquired for themselves.”

Davis said that there were, however, regulations which “pass muster”.

“The cautionary regulations relating to education, prohibitions against evictions, initiation practices and the closure of night clubs and fitness centres, for example, as well as the closure of borders all appear to be rationally connected to the stated objectives.”

Davis found that while the minister’s declaration of a national state of disaster was rational, the regulations promulgated for Levels 4 and 3 in a substantial number of instances are “not rationally connected to the objectives of slowing the rate of infection or limiting the spread thereof”.

The government, in a statement following the judgment, said the court suspended the declaration of the invalidity for 14 days, meaning that current Level 3 regulations remain in operation for now.

“The court has further directed the Minister of Cooperative Governance and Traditional Affairs, in consultation with the relevant ministers, to review, amend and republish the regulations with ‘due consideration to the limitation each regulation has on the rights guaranteed in the Bill of Rights’,” Cabinet spokesperson Phumla Williams said.

Cabinet would comment further once the judgment has been fully studied.

The Government’s response to the Court judgement, in a short Media Statement, follows. 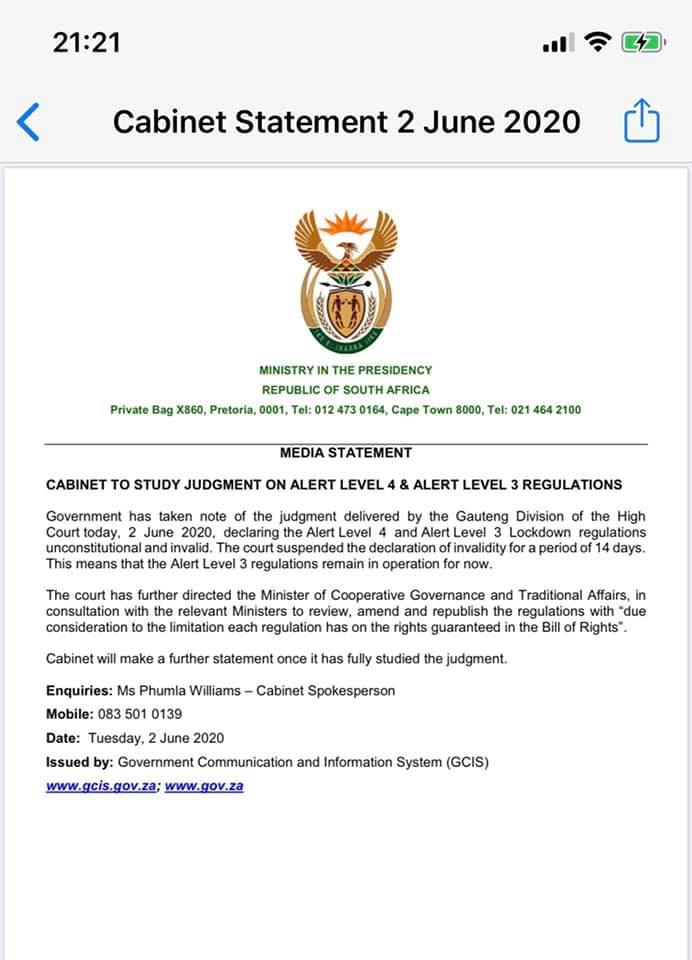