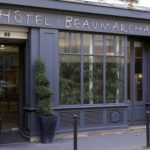 The Sweet Service Award goes to Hôtel Beaumarchais in Paris, and its receptionist Emily, who went out of her way to make my two-day stay an absolute pleasure. I had booked the hotel via Booking.com, and had no personal experience nor recommendation for it. On arrival Emily offered me a room immediately, despite it not yet being 14h00, and told me that she had upgraded my room to a double – with annoyance I discovered on my travels that one sleeps in a single bed when one makes a booking for one person. I had not made a request re the bed type, and she did not know that I write. When I asked her for information on the location of ten Paris patisseries which had been recommended to me by Chef Glen Williams of Foxcroft, Emily typed up a detailed list for me with addresses and phone numbers, and marked these on a map for me, so that I could efficiently get from one to the other by Uber during my stay in Paris. Her English was superb. The only negative about the hotel, but typical for Paris, was the minute size of the lift, into which my bag and I just managed to squeeze into. 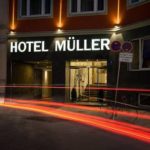 The Sour Service Award goes to Hotel Müller in Munich, which I had also booked via Booking.com. I checked in at 21h00, and struggled to communicate in German with the intern on duty, who came from Sudan, and had a very poor knowledge of German, of the tube stations close by, or of the main tourist attractions on the city, given that I only had 24 hours in the city. When I got to my room (they do not present the room to one), the phone rang constantly, even though I was not expecting calls via the hotel. I went downstairs to call the intern, and he came to look, but he could not get it to stop ringing.  I requested a room change, and at first he told me that they were fully booked! He reconsidered, and found another room. When I returned to the room at 16h00 the following afternoon, after a full day exploring Munich, I was shocked to see that the room had not been cleaned. I was told by the (different) receptionist that the hotel was fully booked and hence they were late in servicing the rooms. I had to endure the non-German speaking cleaner vacuuming the room whilst in the room. Whilst I was eating at one of Munich’s finest restaurants that evening, I was given a message by one of its staff, which was given to the staff member telephonically by the hotel, that the hotel reception would close at 23h00, and that I had to collect the room key from a sister-hotel, which I was not told when I left for the restaurant! Other than a generous breakfast there was nothing good to praise about this hotel!