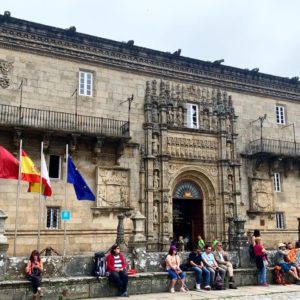 As a final treat to end off my Portuguese Coastal Camino walk last week, I booked the last night of my stay in Santiago de Compostela at the Parador ‘Hostal dos Reis Católicos’, a five-star luxury hotel located adjacent to the Cathedral of Santiago de Compostela, and closely linked in history to the pilgrimages made to the city, to pay respect to Saint James, whose remains are in a silver casket in the Cathedral.

I moved from the Universal Hotel, where I had stayed for the first two nights in the city, to the 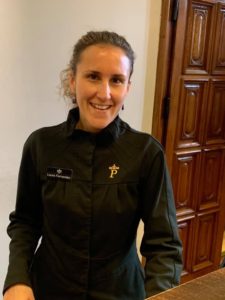 Parador, the world’s oldest hotel, 5 star, 137 rooms, with a fantastic receptionist Laura Ferrandez. I could check in at 10h00 already, and was allowed to have breakfast, which I had read high praise about, on checking in, instead of the following morning, as I was flying out very early the next morning, before breakfast time. It was by far the quietest of all 14 hotels I stayed in during my Camino over a two-week period. 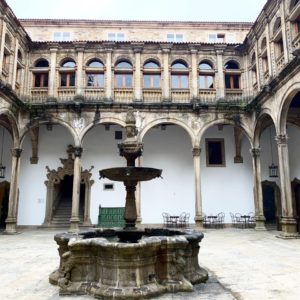 The Parador was previously the Royal Hospital from 1499, caring for pilgrims who had walked the long way to pay their respects to Saint James in Santiago de Compostela. It was therefore apt to go inside the beautiful Cathedral, and to give a metal bust of Saint James a big hug of thanks for this second Camino. And I saw the metal casket with his remains on the way out.

In the hotel boards have been put up, to explain the history of the hotel, and its predecessor the hospital, commendably in both Spanish and English.

The room decor feels royal, and history and heritage of the hotel is reflected in the decor, through 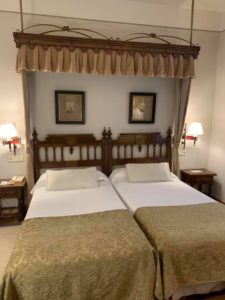 the art work on the walls, and the furnishing. The desk chair was tiny, not comfortable enough to sit in. The room was nice and warm, on a chilly Santiago day. The wardrobe had extra cushions, and two more blankets were brought to my room. A turn-down Service was visible on my return to the room after the concert. There is a mini bar, ample light, and the bathroom is modern, with a range of amenities, including a comb, a shaving set, a toothbrush set, a soap, shampoo, conditioner, a shower cap, and cream. There is a safe in the wardrobe.

The Hostal dos Reis Católicos opened in 1954, on the eve of Saint James Day, having been converted  from a hospital within nine months. A fourth floor was added, and construction work was done 24/7, creating restaurants, bedroom suites, and function rooms.
In its life as the Royal Hospital, it looked after pilgrims walking the Way of Saint James, to the Cathedral in Santiago de Compostela, not just weary with sore feet (I can empathize), but also with wounds from attacks by wild animals, bandits, and other walkers. The Royal Hospital treated their wounds, and gave them food and rest. The tradition continues, with the first ten pilgrims receiving their Camino Compostela certificates daily receiving a free meal in one of the restaurants of the Hotel, an honour I was lucky enough to experience when I completed my Camino Portugues on 28 June.
The building of the Hotel, and Hospital at the time, was proclaimed a National Monument in 1912, and twenty years later it was proclaimed a Site of Cultural Interest. The hospital was designed by architect Enrique Egas, who laid the building out in the shape of a Latin cross. The one cloister accommodated male pilgrims, and contained the refractory and kitchen, and the other side the female pikgrims, in addition to a prison, an orphanage, and the main kitchen. The sacristy was in the head of the cross shape.
On the Hospital grounds an apothecary garden was planted, with plants from which medicines were made. Mallow, elderflower, as well as oils and syrups were derived from plants, a total of 35 species of trees and 86 shrubs being in the garden in 1851, according to a catalogue of the time.
Corruption was a problem in Spain and at that time too, countered then by triple locking doors, each lock requiring a different clerk to unlock it. Despite this precautionary measure, money still disappeared. And corruption continued, in that the administrator of the hospital nepotistically gave better jobs to his family members.

I had been at the Parador the previous day already, over lunch, having been lucky enough to receive a voucher to have a four-course Pilgrim Lunch at the hotel’s Restaurante Enxebre, specialising in Galician cuisine, with seven other pilgrims, we having been the first to receive our Camino Compostela certificates from the Camino office earlier that morning. 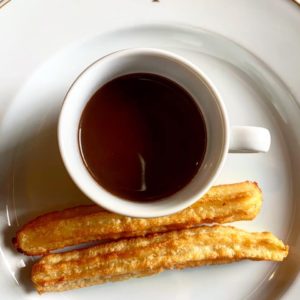 Sadly the Parador breakfast left much to be desired, but if volume of food was the criterion of praise, then it was correct. My best part of the meal was warm Churros and chocolate sauce, a breakfast first. Disappointing was that they did not have Müsli, all cereals coming out of mini Kellogg cereal boxes. Platters were not refilled, and I ate the weirdest ‘toasted bread’ with the scrambled egg, two pieces of bread stick.  An arrogant male Manager felt that I did not need ice, when I requested it, as the orange juice was cold enough. I saw the disinterested waiter Carlos, who served us at the Pilgrim Lunch the previous day, and he remained disinterested, language probably being a 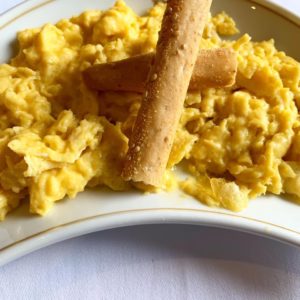 communication barrier. The English Breakfast tea, by Hill’s, was very disappointing, the least good tea I have drunk since I became a tea drinker earlier this year. A surprise was seeing Rooibos as one of the tea options offered.

The Breakfast Buffet included a cereal section, sadly only mini Kellogg’s boxes, and nothing particularly resembling Müsli, only little containers with raisins, prunes, walnuts, ….; a tea and coffee station, with hot water, and a range of tea bags, including Rooibos. There was no Earl Grey tea, but an English Breakfast one which probable is the worst tasting tea that I have drink in my short tea drinking career; there was a big container of orange juice, and when I asked the manager for extra ice, he told me sharply that the juice is chilled! I insisted, and I did get it, but with an attitude and taking some time; three was a heated meal section, with two types of sausages slices, bacon, the most awful looking fried eggs (in olive oil) and ….  ; there were platters of fresh fruit, including kiwi fruit, watermelon, pineapple, orange slices, cherries (a nice touch),….., but 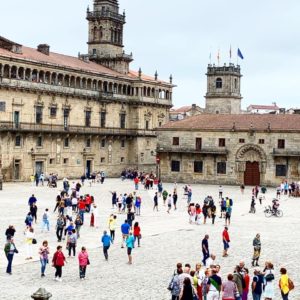 most of the platters were close to empty, and eventually replenished; there were breads and rolls in all shapes and sizes, with butter portions, which would have been more sophisticated had slices of butter been placed on each table;  there were sweet treats, the ultimate being Churros, which I could not resist, not sprinkled with sugar I noticed, as well as a chocolate warmer which kept the sauce liquid, and the Churros were warmed by pass lights, there were plum squares, croissants plain almond, raisin, and chocolate, Tarta De Santiago, the local speciality, …. In addition to this, a tiny card on the table incited one to order one’s egg choice, prepared for one, with three Orion’s: scrambled egg and toast per bread, which made me laugh, the latter being a breadstick broken into two and decorated on the egg as ‘toasted bread’…, omelets by choice, and fried eggs. I had read high praise for the breakfast, but it may have been the volume of the offering rather than the quality that may have been a trigger of the praise. .,,,,, What a disappointing meal. Yet one of the tables had a lovely view into the square outside the hotel and Cathedral, so I moved to it when the table was vacated.

Laura printed out some emails, for admin I had to face before flying off onto my next adventure. She also booked an early morning taxi to the airport for me. I gave Laura feedback about the disappointing Pilgrim Lunch of the previous day, and she gave me a feedback form to complete.

In the hotel Chapel a concert performance, part of the Festival Internacional Peregrinos Musicals, was by flautist Aglaya Shuplyakova, soloist at the Mariinsky Ballet & Opera Theatre in St Petersburg. Works for flute and piano performed included Handel, Bach, Debussy, and two pieces by Piazolla.

There is no better accommodation location in Santiago de Compostela, being right next door to the Cathedral, and a Square they share which is the most alive and active in all of Santiago. There is a constant flow of Camino pilgrim arrivals, and when they arrive in a group, there is a lot of cheering and clapping and singing, pilgrims expressing their joy and celebration in reaching the end of their Camino. On the day of my stay I experienced a traditional folk song performance on the Square n the morning, as well as a dance class in the afternoon. What fun. The concert held in the Hotel chapel was the cherry of my stay. While Laura’s Reception service was exceptional, that if her male colleagues in the Breakfast Room was not. Cuisine is not a strength of this hotel, but its heritage is!