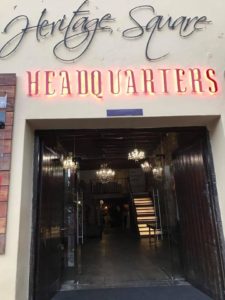 On Thursday evening Llewellyn Lambert and I attended the media launch of the HQ World Class Cocktail Menu, the theme of the event being Wild West. We tried five of the six cocktails on the HQ cocktail menu, developed by Warren Cowdy, the HQ General Manager.

The cocktail menu explained the WORLD CLASS Mixology competition as the most prestigious in the world. ‘The program elevates the bartender’s craft & creates compelling fine drinking experiences for the consumer. WORLD CLASS has been transforming cocktail culture around the globe since 2009. With over 15000 bartenders that have been inspired and educated in the craft of mixology. Today the WORLD CLASS program includes luxury outlets from 50 countries’.

We were given three vouchers each to try the cocktails, so Llewellyn and I shared them. On arrival 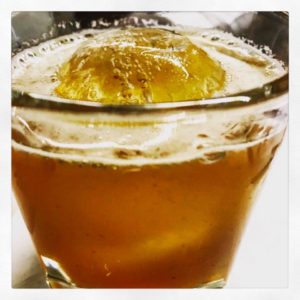 we were served the first of the Cocktails, a Signal Hill Sunrise (R95), which was made with Bulleit Bourbon (photograph left), and to which was added burnt orange bitters, Aperol Spritz, and cinnamon-infused Vermouth 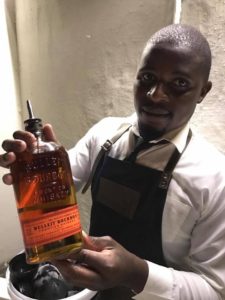 served on the rocks, a refreshing start to a fun evening.

The Wild West theme was reflected in a Saloon sign above the bar, and wagon wheels cactus plants, and candles.

Music was very vibey, DJ Craig da Sousa adding to the fun of the evening. Whilst very loud initially, it was turned down a 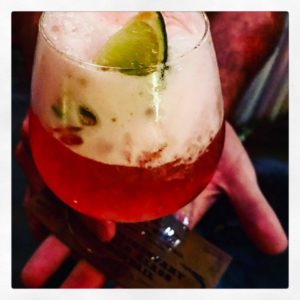 little, and we could then hear each other speak. We were lucky to find a table with two seats.

Cocktail number two was named HQ Blush (R82), and was made with Tanqueray No 10 gin, to which was added 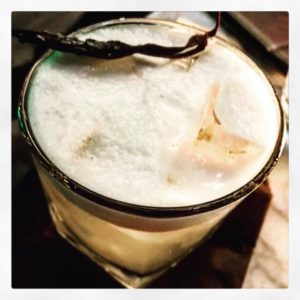 cranberry juice, lime juice, and elderflower juice. This cocktail was previously on the Cocktail menu.

Our third cocktail was named The Poached One (R82), and contained poached pears, lemon juice, white wine, Angostura Bitters, and topped with a charred 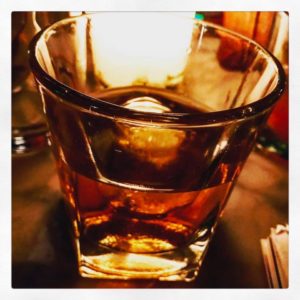 vanilla stick, which added some excitement to the making of the cocktail.

I loved the Opulence cocktail (R98), not being a whisky drinker at all. It was made with Johnnie Walker Gold Label, honey, vanilla, plums, and bitters, the honey giving the cocktail a sweetness to balance the smoky and oaky whisky. The Johnnie Walker website informs that the 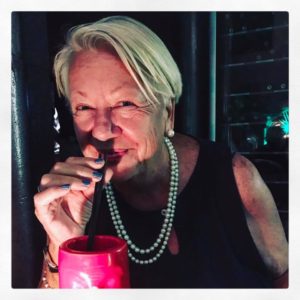 whisky was made with water from hills where gold was once discovered. This cocktail has already been on the HQ menu.

The Tiki-style cocktail Steeped in Heritage (R88) was not visible, as it was served in a weird red large handleless mug. It contained Ron Zacapa, chai steeped clarified milk, grapefruit juice, 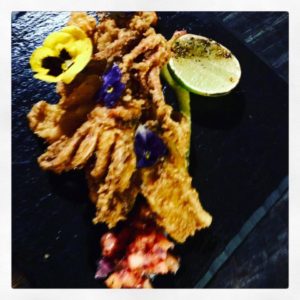 We were served Tapas canapés throughout the event, including tomato and mozzarella Arancini, as well as very delicious marinated chicken skewers. Llewellyn and I 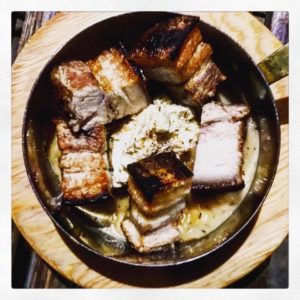 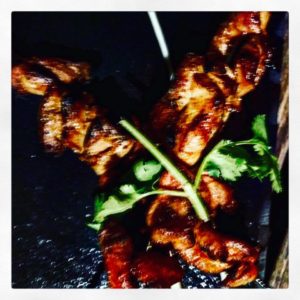 foraged wild mushrooms (R42 for a half portion).