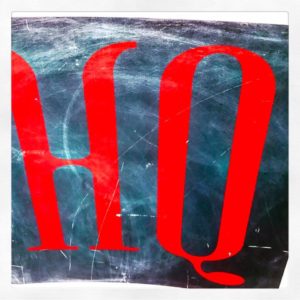 The invitation to attend was extended by HQ owner Iain Banner, 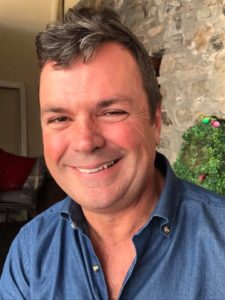 when we bumped into each other in Constantia a week ago. I arrived early, and sat at a sunny table in the courtyard, enjoying a dry cappuccino and a glass of water, until the guests started arriving, and then I moved to the media table on the upstairs terrace. 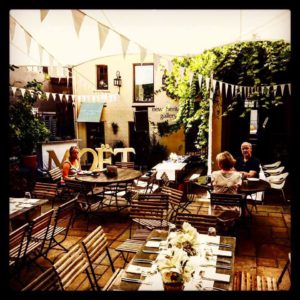 Belvedere Mary, both costing R58. Moët branding was visible in the courtyard, placed in front of the DJ platform. Moët et Chandon was offered at R850 per bottle of Brut, and R950 for its Brut Rosé, while a Magnum was charged at R1650.

The Belvedere Vodka was available in sharing cocktails, at R300 for 1,5 liters, for a Smoked 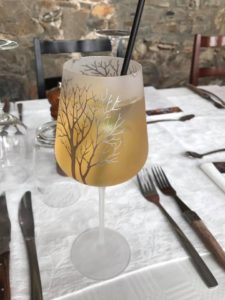 Belvedere Mary, Rose Cosmo (rose liqueur, cranberry juice, and fresh lime), and The Rocket (citrus, pineapple, litchi, and fresh rocket). I photographed a Belvedere Cucumber Spritz in an interesting looking glass at our table, not drinking alcohol given a busy day ahead.

The entertainment was by Brett Aitken, Blanka Mazimela, and David Watkyns. 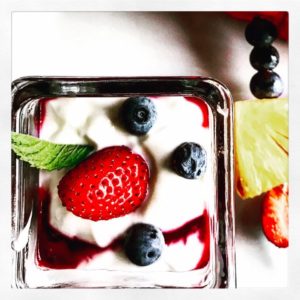 Due to a time misunderstanding, I had to leave for an hour. By the time I got back the starters had already been served, but the selection of four was plated for me, so that I could photograph it. I thought one had to choose one of the four Starters, but one receives one of each: fresh mixed seasonal fruit (watermelon, strawberry, pineapple, and 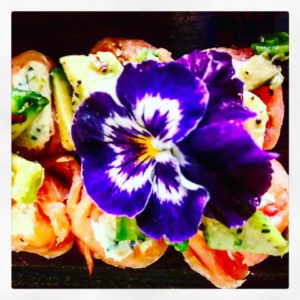 blueberries) on a skewer; a granola pot with yoghurt and berries; smoked salmon roulade with avocado and herbed cream cheese; and a mini corn loaf and a mini apple cinnamon muffin.

The main courses were a choice of four: HQ Prego sirloin roll with Café de Paris butter and skinny 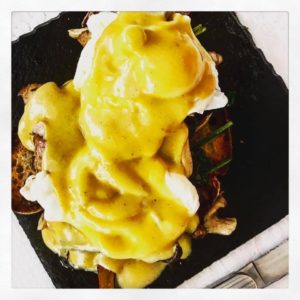 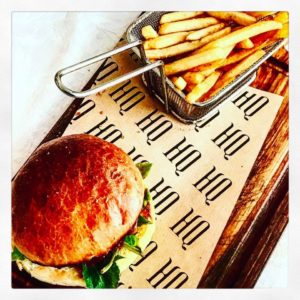 feta, red onion, and peppers, served with Melba Toast and pesto mayonnaise. No one at our table ordered the frittata, so I could not photograph it.

I ordered the Pork belly Benedict, the first time I have eaten such a Benedict. I love wilted spinach, so the combination of it with the hollandaise sauce, and 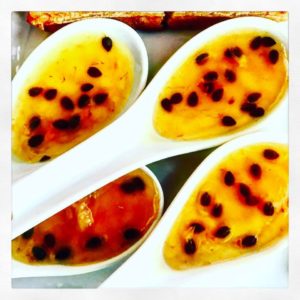 crispy porky belly and crackling was excellent. It looked similar to the  Wild mushroom Benedict.

The dessert was served on two platters, with three items, to share. There was waffles with banana and chocolate ganache; passion fruit panna 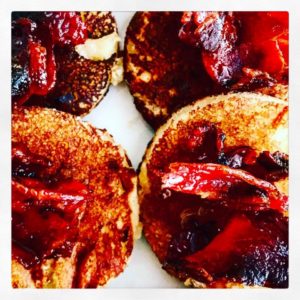 cotta; and maple bacon flap jacks. I had my last cappuccino of the day, before leaving for home.

There was a wonderful atmosphere in the courtyard, an all-male table spotted for a Bachelor party, an ideal way to celebrate a forthcoming  marriage. The response had been very positive, and all tables in the courtyard were sold out for the Brunch.

The guests enjoyed themselves, and were likely to spend the rest of the afternoon there. The food was good and more than enough. The service at our table was good, and one of the waiters got the recipe for the apple muffins for me from the kitchen. Our media colleagues were in good spirits, and we had fun together.