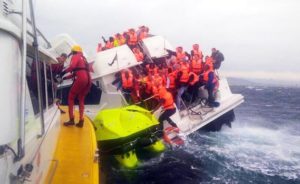 What is unbelievable is that the ferry took water in high swells, and in a gusting South-Easter, having made it irresponsible of the company to have gone out to sea in the first place, and not having cancelled its service!

The Cape Argus reports that a probe has been launched into the incident by the South African Maritime Safety Authority. DA Western Cape Chairman for Economic Opportunities, Tourism, and Agriculture, Beverley Schäfer, said that ‘they were ‘gravely’ worried that the safety of the ferry service between the Nelson Mandela Gateway and Robben Island had now been brought into question’, according to the Cape Argus.  Schäfer said: ‘This incident poses a huge risk to the credibility of the ferries at the start of the province’s tourism season. Robben Island is a National Heritage site that tourists look forward to when they visit South Africa; this can possibly be a major problem if tourists are fearful (sic) for their lives’.

Ms Schäfer is to meet with  provincial Tourism Minister Alan Winde about the incident, with a suggestion that the management of the Robben Island Museum, with its ferry service, be moved to the Western Cape Government.

A May Day distress call was sent, after the front windows of the ferry had broken due to the strength of the waves, and the main life raft had swept away! The National Sea Rescue Institute (NSRI) sent rescue boats from its Melkbos, Bakoven, and Hout Bay branches to rescue the passengers, who had to jump into the icy water before the rescue boats arrived! Police rescue boats and helicopters joined the rescue operation. All passengers wore life vests when rescued. Counsellors were made available to assist the ferry passengers deal with the trauma.

Robben Island Museum chief executive Mava Dada said ‘The safety of our passengers is a key priority for us. We are very sorry about this incident‘. A very weak statement coming from the CEO about such a traumatic event! An internal investigation is underway.

POSTSCRIPT 26/9: I have received the following media statement from Reputation Matters on behalf if its client Robben Island Museum:

Robben Island Museum thanks all parties who contributed to successful rescue

On Friday 15 September 2017, Thandi, one of Robben Island Museum’s (RIM) chartered passenger ferries, experienced trouble during its return trip to Cape Town. Once Port Control received the distress call from the ferry, Port Control immediately implemented emergency procedures, along with notifying the National Sea Rescue Institute (NSRI) to get everyone back to shore safely.

“Due to the quick response and effective communication from all parties involved all 64 passengers and five crew members were returned safely to Cape Town. I would like to extend a heartfelt thank you to the NSRI, ER24, V&A Waterfront, all other emergency services and the RIM team for their quick response to the scene and for a successful rescue operation,” says Mava Dava, CEO of RIM.

RIM undertakes daily consultations with their ferry masters as a part of their stringent sea safety protocols. This is done to assess the condition and to make calls to determine whether a ferry should proceed to or from the island. The consultation on Friday confirmed that the forecast for the day was not a reason for concern. However the weather is very unpredictable and the strong winds soon caused unplanned adverse conditions that exceeded that of the forecast.

“We have risk mitigation plans in place that account for critical situations such as this,” says Dada. Once the alarm had been raised all the passengers were informed, fitted with life jackets and directed to the evacuation section on board before being picked up by the NSRI’s rescue vessels. “The success of having no casualties means that our current risk mitigation plans are working,” adds Dada.

“The safety of our passengers has always been a key priority for us. A strict requirement for any chartered ferry to conduct business with RIM is for the vessel to have a maintenance plan or maintenance schedule to ensure all machinery and equipment are always in perfect running condition, they are also required to have all the safety certificates for the vessels,” says Sandresan Thandroyan, Senior Manager Ferry Operations, Robben Island Museum. In addition to strict maintenance requirements all vessels need to go through RIM’s mandatory safety briefing before carrying passengers to and from Robben Island.

Following this incident RIM have initiated an internal investigation which will determine the cause of the incident. South African Maritime Safety Authority (SAMSA) will also be conducting an investigation; RIM will support them throughout the process.

It is business as usual. The trips to Robben Island are continuing.

For more information about the daily tours, please visit http://www.robben-island.org.za/.