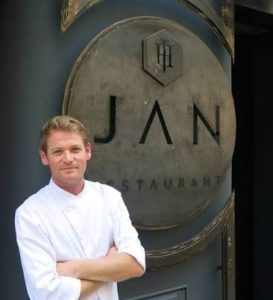 Today I depart on a two-week eating tour of France, continuing my World’s 50 Best Restaurant journey I began in New York and London in July last year. There is no more exciting start to my culinary trip than dinner at JAN restaurant in Nice on Wednesday, given that it has just been awarded the 2017 Michelin one-star rating. In February 2016 owner Jan-Hendrik van Der Westhuizen did our country proud, in becoming the first South African chef to own a Michelin-star restaurant.

On Instagram Chef Jan-Hendrik posted: ‘It’s one of the greatest achievements to get a Michelin star. But to keep it. Now that’s another story! JAN is proud to announce that we are top of our game and so blessed to be announced with a star in the 2017 Michelin Guide France. Thank you to my team for standing next to me and believing in what makes JAN, JAN. #michelin2017 #michelinstar #JAN #proudlysouthafrican??’.

In June 2015, whilst on holiday in Europe, I made the spontaneous decision to fly from Munich via Düsseldorf to Nice, for lunch at JAN Restaurant.  JAN Restaurant and its owner Chef Jan-Hendrik made culinary history in our country, in receiving its first Michelin star, the first such honour to go to a South African chef-owned restaurant. The Michelin inspectors had eaten at JAN Restaurant just a week prior to my visit, and Chef Jan-Hendrik must have had an inkling of what was to come, as the feedback to him after their lunch had been ‘impeccable‘.

JAN Restaurant opened with 28 seats in 2013 near the port of Nice, in a renovated motorcycle outlet, with a stylish interior decor, including chandeliers from the Metro in Paris, and chairs made especially in Paris. Just eight months after opening, it was awarded two knives and two forks in the 2015 Michelin Guide. The accolades followed quickly, including a Condé Nast Traveler World’s 15 Best Restaurant, and inclusion in the Gault et Millau guide.

JAN Restaurant serves a fusion of Jan-Hendrik’s South African food roots going back to Middleburg (e.g. mosbolletjies, biltong dust, Malva pudding) with the freshest herbs, vegetables, and fruit available to him from around the corner in Nice, a shop Jan-Hendrik introduced me to after the lunch. Front of house staff are French, while the chefs in the kitchen with him are from Delaire Graff in Stellenbosch, namely Kevin Grobler (whom I met at JAN), Rutger Eysvogel, and Scott Armstrong.

My first stop from Cape Town is Munich, and I am hoping to get into one of the two Michelin 2-star restaurants in the city, understandably already fully booked for Valentine’s Day.

From Paris I fly to London, and as I ate at all three World’s 50 Best Restaurants in the city (The Ledbury, Clove Club, and Dinner by Heston Blumenthal – reviews can be found via the Search facility on this Blog) last July, we have booked lunch at a Michelin 3-star restaurant in the city.

I will post my restaurant reviews and food experiences on my Blog, as well as on Instagram, Twitter, and Facebook. I would be delighted to have my readers travel with me over the next two weeks.