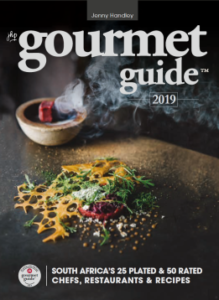 For the third year running Jenny Handley Promotions has recognised top restaurants, and is an interesting predictor of Eat Out Awards, even though they do not always coincide. The 2019 Awards winners and Gourmet Guide were revealed on Monday. A total of 25 restaurants and their chefs were recognised with one, two or three Plate awards.

I had to laugh in reading the media statement from Jenny Handley Promotions, placing its Plate awards on a par with Michelin stars awarded in many countries, and Chef Hat awards in Australia! In South Africa it clearly is the Eat Out Top 10 awards that local chefs aspire to, and which make their cash registers ring! The media statement alludes to this Plate award system using ‘global standards for evaluating and rewarding fine dining restaurants’, the Plate awards initially having been marketed as using Michelin inspector techniques and scoring to judge our local restaurants. This is nonsense of course, when one hears that free meals are requested for owner Jenny Handley and her PA, immediately making restaurants aware of a meal being judged for an award! The media statement further states that the Plate Awards are ‘…acknowledged for its impartiality and credibility’. Once again no one has said this publicly, except Jenny Handley Promotions about its own awards! In announcing its visit, and in begging for freebies, this award system has no credibility!

Even more laughable is the concept of benchmarking our restaurants with top international Michelin star ones, using examples of a ‘seafood restaurant’ and a ‘country manor restaurant’, yet no such local restaurant equivalents appear in its list of 25!!!

“It took many years of global research to understand what sophisticated diners want in an unforgettable restaurant experience. Dining at world-class establishments has given me not only the honour of interviewing the chefs that make it happen, but also to compare our restaurants, and to be justifiably proud of our homegrown chefs,” says curator and originator of the award, Jenny Handley. ‘Rather than comparing SA restaurants and chefs to one another, the JHP Gourmet Guide benchmarks according to global icons. A seafood restaurant will be compared to, for example, Le Bernardin in New York which holds three Michelin stars and was voted number one in New York in four out of five years. A country manor restaurant could be compared to Raymond Blanc’s Belmond Le Manoir aux Quat’Saisons in Oxfordshire, holder of two Michelin stars’.

‘Whilst we cannot change the concentration of fine dining restaurants in certain regions, like Cape Town and the winelands, we consciously ask for nominations from all over the country. Initial visits are anonymous, and only the visit at which the chef is interviewed, is announced and hosted. Restaurants that rate highly are considered for a plating. As consistency is one of the more important criteria, over 30 in all, chefs can only be evaluated for a plate after completing a season in the restaurant. One aspect of fine dining we can change is upskilling people who wish to work in this engaging, exciting industry. As there is no barrier to entry, people with the right attitude can start at the bottom and develop aptitude,’ Handley said.

Inaugural Haute Performance Awards were presented to ‘those who are creating 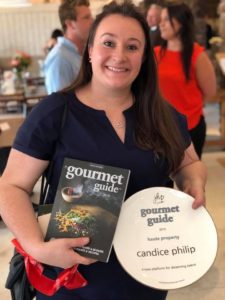 footprints in the industry’: 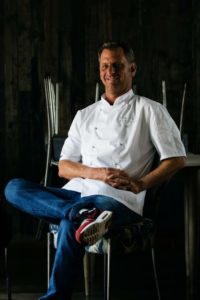 Three Plate awards recognise exceptional dining, on a par with an international dining experience. These were awarded to:

Two Plate awards recognise fine dining ‘that demands a detour’. These were awarded 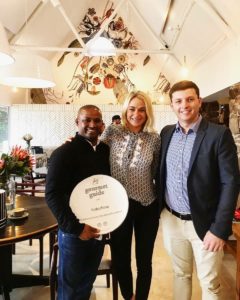 Camphors at Vergelegen (move up to two Plates this year)

Indochine (Photograph right, with Chef Virgil Kahn on the left)

The Restaurant at Waterkloof 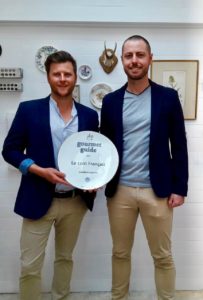 The biggest discrepancy between the 2018 Eat Out Top 30 nominations and 2019 Plate Awards is the exclusion by Eat Out of many of the One Plate awards, including Aubergine, Urbanologi (definitely not fine-dining), Rust en Vrede, Chef’s Table at the Mount Nelson, Terroir, and Myoga.

I am delighted for the recognition which Chef Michael Deg of Equus has received. The Pot Luck Club and The Shortmarket Club are Tapas Restaurants, hardly meeting the Fine Dining description.

Eat Out and the Gourmet Guide are unanimous in not recognizing Chef Liam Tomlin’s Chefs Warehouse in Bree Street (despite giving him a ‘consolation prize’); La Mouette, and Springfontein Eats.

Eat Out announces the Top 30 Restaurant list for 2018: some surprise inclusions and exclusions!

Compared to the 2018 Gourmet Guide Plate awards, the following restaurants fell out this year: Delaire Graff, Hartford House (sadly its very talented Chef Constantijn Hahndiek departed to become a sales rep for Sagra Foods and Wine Merchants), Luke Dale-Roberts X Saxon (closed down), and The Roundhouse (closed down). Surprisingly, Wolfgat and Fermier were not plated but owners and Chefs Kobus van der Merwe and Adriaan Maree, respectively, were recognized.