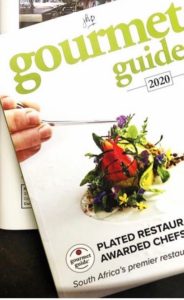 The publishers of the Gourmet Guide 2020 have made it really difficult to write this post, in that it is not revealing its full list of 36 restaurants that received its one, two, or three plate awards on Monday, until January 2020, its website states. One can surmise that it wants the Gourmet Guide 2020 to be bought so that it can generate income. By January these Awards will have long been forgotten!

I had to do some creative detective work to compile the list of 36 restaurants, as it appears that I have been blocked from the Gourmet Guide’s Instagram account, and so must have been other writers, as no journalist has written about the Awards, other than BizCommunity.com, only listing the five three-plate restaurants. Facebook and Instagram posts of restaurants, calls to restaurants, 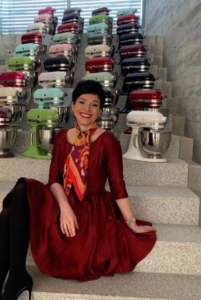 as well as messages sent to chefs, helped to complete the puzzle.

The Gourmet Guide was launched five years ago, and initially had little credibility amongst chefs. Credibility was low, as the judge visits are pre-announced, with a request that they be comped by the restaurant. A further credibility problem was the initial claim that Michelin star criteria were being used to evaluate the restaurants, the number of plates awarded per restaurant intended to be seen as the equivalent of a number of Michelin stars.  The Gourmet Guide no longer draws this parallel directly.  Initially the owner of the Gourmet Guide, Jenny Handley, was an unknown entity.

Its claims of how highly regarded the Gourmet Guide Plate awards are sound exaggerated and like PR puffery! Chefs and diners still regard the Eat Out Awards as THE most desirable award to obtain, there being a direct link between the Eat Out Top 10 restaurant ranking and the number of bookings. This is what Gourmet Guide writes about its publication:

‘In many countries restaurants aspire to a one, two or three-star rating. In South Africa, restaurants aim for one, two or three plates, the ultimate accolade. The prestigious plate rating, which equates to global standards of evaluating and rewarding refined and fine-dining establishments, has been lauded for its authenticity, impartiality and credibility. It celebrates the uniquity of South African cuisine, from classic and conservative to daring and different’.

“To be selected as one of South Africa’s three-plated restaurants and featured in the JHP Gourmet Guide is a major honour, it is humbling, and a huge boost of motivation. One of the ultimate accolades in South Africa, like being awarded three Michelin stars, through hard work, dedication and perseverance. Receiving this award acts as reassurance for us that we are on the right track, we receive confirmation that we are doing not only the right things, but that we are also doing them right,” said chef Chantel Dartnall of Restaurant Mosaic (Photograph above, right). One wonders if these are Chef Chantel’s own words, as the ‘Michelin’ stars are referred to.

A total of 36 plated restaurants was acknowledged, growing from 25 last year. On Monday 20 one-plate, 11 two-plate and 5 three-plate restaurants were recognised, Indochine at Delaire Graff in 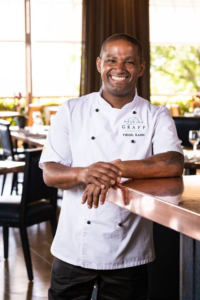 Stellenbosch stepping up into the 3 plate category being a tremendous surprise, a huge accolade for the low-key hard work which its Head Chef Virgil Kahn (Photograph right) and his team put into their Asian cuisine offering.

The criteria for being considered for a plating award were as follows: ‘Restaurants are evaluated on the entire experience, but with the focus on the cuisine. Initial visits are anonymous, and only the visit at which the chef is interviewed, is announced and hosted. Restaurants that rate highly are considered for a plating. As consistency is one of the more important criteria, restaurants can only be evaluated for a plate after a chef has completed a season in the restaurant, and no restaurant is immediately awarded three-plate status’. In addition, ‘Plates are awarded to restaurants, not chefs, and new restaurants are never elevated to three plates initially, as ongoing consistency is a key criteria.

The JHP Gourmet Guide 2020 awarded  one, two and three plate awards this week, with the following stature for each plate category:

The following restaurants were recognised in the 2020 Gourmet Guide: 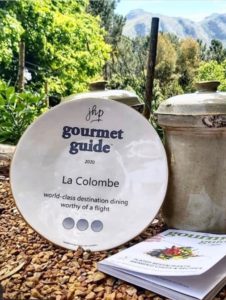 Grei at The Saxon

Chefs Warehouse at Maison in Franschhoek

Myoga – the consistent inclusion of this dinosaur remains a surprise

View at the Four Seasons Hotel in Johannesburg

The Werf at Boschendal.

Interesting is to observe the changes in award winners between 2019 and 2020, the following restaurants having dropped out:

#   Bertus Basson’s Overture – what a karmic blow for this chef

In addition to the 36 plate awards, a number of category awards were also,presented, defined as follows: ‘The Haute Performance Awards were given to those creating footprints in an industry that is people-centric’ (the meaning of this sentence relative to the Awards confuses me!):

• Haute Passion – Reuben Riffel of Reuben’s – what a surprise, given how under the radar Chef Reuben is. This award is not motivated or explained, neither are the other four awards. .
• Haute People (team) – Faber
• Haute Pride – Giles Edwards of La Tête,
• Haute Promise – Carolize Coetzee of Tokara and
• Haute Property – Lord Nelson at the Belmond Mount Nelson.

The first-ever ABALOBI Provenance Awards for leading by example to create awareness and inspire change in respect of Sustainability were presented to: 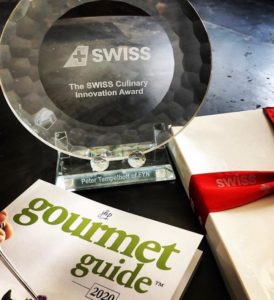 The lengthy motivation for presenting the Award to Tempelhoff follows:

‘Innovation involves a deliberate application of information, imagination and initiative in driving value from resources and includes all processes by which new ideas are generated and converted into useful products. Innovation arises when ideas are applied to further satisfy the needs and expectations of the customers.

Dr. André Schulz, General Manager for Lufthansa Group, Southern Africa says, “The Culinary Innovation Award is an opportunity for SWISS to support South Africa’s top chefs by showcasing their work, encouraging even greater culinary innovations and rewarding them for their outstanding work with this once-in-a-lifetime experience. We congratulate Peter for an outstanding presentation and as the most innovative chef, he, along with a partner, will fly SWISS Business Class to Europe to continue being inspired and explore new culinary experiences.

The SWISS Culinary Innovation Award is truly an extension of SWISS’ well regarded and elegant service offering. It focuses on highlighting fine dining that elevates the customer experience with creativity, effort, efficiency, passion, accuracy, precision and sustainability. SWISS prides itself on these key elements to create a memorable and lasting experience for the traveller.

The following elements are considered for this award, all culminating in an overall innovative dining experience:

2.    EFFORT: SWISS expresses its special service with unique touches, and there is no doubt that the overall visual effect of food should elicit a range of responses. With a little tweaking, the effort evident in the dish should successively redefine and elevate an ancient, classic and contemporary gastronomy.

3.    EFFICIENCY: Is the food execution backed by safety and efficiency? The process behind the creation of the dishes is one of the most important aspects.

4.    PASSION: The execution should be sophisticated enough to showcase a passion for food. The way the ingredients are combined to deliver innovative results, and showcase the true passion that lies behind the cuisine and creation of it.

5.    ACCURACY: Forging gastronomy to new boundaries with a strikingly accurate approach. The food conceptualisation is to surpass conventional food artistry, blurring the borders of ultra-modern culinary and art.

6.    PRECISION: Whether it’s the precision of executing a boiled egg in the evening or a cutlet and French fries in the morning – knowing the right dish to satisfy the client’s taste goes a long way. Crowning the gourmet execution with a fine precision of charm is of underlying importance.

7.    SUSTAINABILITY: While food sophistication and innovation are key to this award, demonstrating the knowledge and successful contribution to the widespread adoption of local food practices is appraised’.

The JHP Gourmet Guide 2020 will be remembered for its bizarre policy of not publicising the names of the 36 one, two, and three plated restaurants for three months after presenting the awards, and for withholding such information from journalists by blocking them on Social Media. Handley once was in the PR industry, and should understand that immediate publicity after an event is worth gold. Three months later is after the fact. One wonders why the Guide was not ready for distribution immediately after the awards ceremony earlier this week. I personally loved the challenge of preparing the list of 36 plated restaurants, which has not been published anywhere else to date.

The 2020 guide will be available in leading bookstores, at Woolworths, and at participating restaurants at R299, from November 2019.