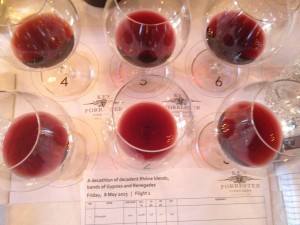 Yesterday we were invited by Ken Forrester Vineyards to attend a tasting of twelve of its Rhône blends, produced in the last twenty years of its journey in making Rhône varietals and blends.  One could not help associate owner Ken Forrester with the character of these wines, having interesting names of Renegade, Three Halves, and Gypsy.  The tasting was followed by lunch at 96 Winery Road, a restaurant co-owned by Ken with his brother. 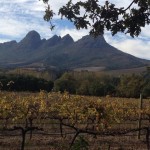 We met at the Ken Forrester Tasting Room, on a gorgeous sunny autumn day, dressed with a Gypsy theme, in table cloths, carpets, staff outfits, bunting in the vineyard, a banner at the entrance, and ribbons on our media packs, all reflecting the Gypsy theme. 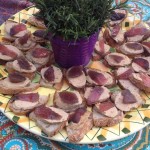 We were spoilt with very special canapés, foie gras topped with a home-made pear jelly, and the most wonderful pork belly, both made by 96 Winery Road restaurant, giving us a solid 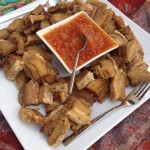 foundation for the tasting to come.

The tasting was done in Ken and Teresa Forrester’s manor house dating back to 1694, sixteen of us seated around the lovely antique table in the spacious lounge/dining room. We tasted the wines in two flights of six, first selected vintages of the Renegade and Three Halves, and then six vintages of The Gypsy: 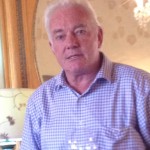 *   The Renegade is made from Grenache, a cultivar which intrigues Ken. When he first wanted to use it in his wines twenty years ago, he sourced it from Devon Valley in Stellenbosch from a 4 hectare block, the vines then already 50 years old. The vines had been planted in wide rows, ‘wide enough to drive a bakkie sideways’, Ken quipped! Not all grapes were usable, the lower ones receiving far less sun. Marketing a Grenache/Syrah blend proved to be a bad business decision, he said, as few locals knew the Grenache varietal or could pronounce its name correctly. Over time the production of Grenache in our country has increased, from 80 ha in 2004 to about 290 ha currently.  KWV had a plant control and improvement division, which initially incentivised the production of the varietal, but in the late ‘Fifties no new Grenache was made available to plant. Grenache was also grown in the Swartland, and these old vineyards have been retained, not threatened by developers turning vineyards into housing developments, as has happened in some Winelands towns. Ken sources Grenache from the Marais family in the Piekenierskloof.

Ken addressed his branding problem by naming the wine Renegade, reflecting ‘no respect for rules’, and descriptive of his approach to how he makes and markets his wine. The Grenache gives the wine an ‘earthy rusticity‘, and the Syrah a hint of spice, nutmeg, and black olive. In some vintages a touch of Mourvédre has been added, for complexity. Ken told us that Grenache is referred to as ‘the Pinot Noir of the South‘ in France.  They do not have an exact formula for making the Renegade blend – in their latest 2011 blend it is 60% Syrah, 26% Grenache, and 14% Mourvédre. Renegade is sold for R90.

*   Three Halves is dominated by Mourvédre, a very difficult cultivar to deal with, Ken shared. It is the last cultivar to be harvested every season. Ken was the first to plant the cultivar in Stellenbosch twenty year ago, against the advice of his consultants at the time.  He has never used new barrels for Mourvédre, using old Chenin Blanc barrels.  They do not make Three Halves every year. They make a maximum of 2800 litres in a year, and this wine is only sold at the cellar door, at R195.  The Three Halves name was created by half the blend being Mourvédre, and the other half being a half each mix of Grenache and Syrah, thus creating ‘three halves’!  In the latest 2011 vintage the blend composition is 48% Mourvédre, 26% Grenache, and 26% Syrah.

*   The Gypsy is one of three wines in the flagship Icon range, for which vineyard-designated grapes are used.  It is made mainly from Grenache with some Syrah, and only the very best barrels of each variety are used, matured in third and fourth fill oak barrels for 24 months, creating a wine with a contradictory character of balance, and a wild and Bohemian character, descriptive of its The Gypsy name!  The latest 2011 vintage is made from 49% Syrah, 45 % Grenache, and 6% Mourvédre. Residual sugar has increased more recently, and Ken explained that they pick earlier than they did prior to 2010, upping the sugar.  Ken explained the aerial system used to identify which grapes in a block are ready to be harvested, and this is repeated every week, rather than picking a whole block in one go.  The Grenache for The Gypsy comes from the Piekenierskloof too, from John Rauch.  Viticulturist Rosa Kruger is working on creating the first heritage South African Grenache.  This wine is market-led, and Ken strives to create elegance despite its higher alcohol of 14% or more.  The wine has strawberry and Pomegranate notes, reflecting its Grenache content.  The Gypsy is sold for about R360, and has long-term ageability.

The wines tasted were praised by the attendees, which included Remington Norman, who has written tomes on Rhône and Burgundy wines, and is regarded as ‘the king of Rhône’ – he lives in the UK and in Somerset West.  He encouraged Ken to ‘let the vines grow even older‘, winemakers in France using Grenache which is 90 years or older in their blends. Ken concluded the tasting by saying that every year he feels that he knows less, as nature is in control, and determines the outcome of the wines made. Old vines are tempremental, and are very good in good vintages, but equally can be bad.  For this reason Ken uses the blending process to ameliorate a poor vintage and/or varietal, blending the blemishes away.

We drove to 96 Winery Road for lunch, sitting at two tables in a separate room. Our starter was a generous portion 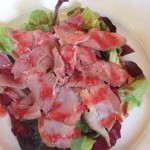 of smoked duck breast salad, plated on top of lettuce leaves, and drizzled with a raspberry 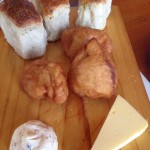 vinaigrette. This was paired with a Van Coller Reserve White 2012, named Fijndraai, a blend of 80% Viognier, 11% Chenin Blanc, and 9% Rousanne, made by Ken Forrester Wines for a doctor in Pretoria, who owns a 38 ha piece of land next door to Spier, on which they grow Grenache, Roussanne, Viognier, Durif, and olives.  The bread plate contained moreish vetkoek.

We all loved the wild mushroom cappuccino, which had been ‘truffled‘, and was paired with Ken Forrester 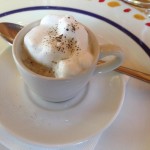 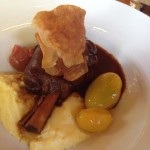 Roussanne 2013. This was followed by the main course of slow cooked Riebeek lamb shank, served with Parmesan polenta, confit tomatoes, and topped with sweet potato crisps. This was paired with both the Fijndraai Red 2011, as well as Three Halves 2009.

A favourite course was a specially selected cheese plate, which had been chosen by Ken, in part with cheeses which he had brought from overseas. It included Harrods Stilton, Healey’s Mature Cheddar, Pont l’eveque, Natal Brie, and Soumaintrain Berthaut farmhouse French cheese.  The plate came with a home-made quince jam made by Chef Natasha Wray, and slices of ciabatta.  The cheese plate was paired with Renegade 2011 and The Gypsy 2011.

The generous lunch was ended off with a dessert plate of multi-coloured macaroons, chocolate 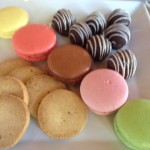 truffles with glitter, and rosemary shortbread biscuits, ‘paired’ with our coffee orders.

Ken is a dynamic and passionate winemaker, and excellent storyteller, a true Renegade!  The tasting and lunch was a spoiling end to a busy week.

Disclosure:  We received a bottle each of Ken Forrester Three Halves 2009, Roussanne 2012, and olive oil, as well as a CD of Dvorák Slavonic Dances with our 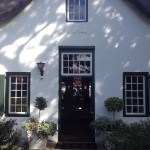