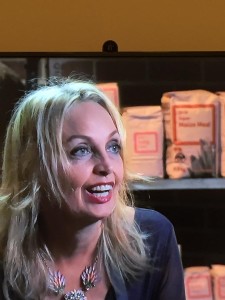 Yesterday I had the honour to get to know Koekedoor judge Mari-Louis Guy better over a 3½ hour period, first visiting the Cakebread Studio which she owns with her brother and business partner Callie Maritz. The get-together was crowned with a visit to the One & Only Cape Town, where the three of us indulged in what is my favorite Afternoon Tea in Cape Town.

Mari-Louis and I had met only twice previously, at a bazaar, and at the launch of Chef Jan-Hendrik Van Der Westhuizen’s second book ‘A Breath of French Air’ at the One & Only Cape Town in March. I had requested an interview with her, and she has similar plans, which will become known when she publishes the interview, one of a series which will be hosted at a number of different ‘glam’ locations. Mari-Louis did not know that the One & Only Afternoon Tea is my favorite, her choice being pure coincidence but perfect.

Sitting in the Cakebread Lounge, I traveled a journey with Mari-Louis over her busy life, starting with her name. I am not blessed with the easiest name, but Mari-Louis surely has to spell her double-barreled first name daily. She is named after her two grandmothers Maria and Louisa, which her parents had abbreviated, and was born a Maritz. She grew up in Lutzville on the West Coast, her parents managing the local hotel while her father did his articles. It was an exciting life to live in a hotel, and eat off a menu every day. On Sundays they would eat at other hotels in the area, expanding her repertoire. I remember from one of the previous Season 2 episodes of Koekedoor that Mari-Louis has wonderful childhood memories of the hotel dessert trolley, and this became the theme of episode three.

One of Mari-Louis’ memories of her childhood in Lutzville was that the French had come to their town to build the Sishen Bridge over the Olifants River, and she still remembers how different they were, especially smelling so strongly of garlic! Movies were shot in the area, and it was exiting to see and sometimes meet some of the actors. As children she and her brother often were extras in such movies. Her mother was the food correspondent for the local newspaper ‘Ons Kontrei’.  She laughed when she told me that she still eats like a child, cake in the morning, and salads the rest of the day! I asked her what she had for breakfast yesterday morning, and she told me that it was American pancakes, having been to see One & Only Cape Town Pastry Chef Kyle Hickman prior to our visit in the afternoon. The Maritz family moved to Vredendal when her father had finished his articles, setting up his accounting practice there. Mari-Louis went off to the University of Stellenbosch to do an Honours in Home Economics. Coincidentally it emerged in our chat that her residence room-mate was Ann Ferreira, whose parents the McWilliam-Smiths at the time had created Le Quartier Français in Franschhoek. She often visited there with Ann.

After University she taught Home Economics for eight months, until she had enough, joining Pick ‘n Pay as a Home Economist. She created a new advertorial service, leading her to styling. In this time she met Mr Guy, the brother of two friends of Mari-Louis, who has three generations of sealegs.  They worked on top yachts, her husband as an engineer and Mari-Louis as chef. She met Princess Margaret on board a Versace-designed yacht they worked on. They spent eleven years together on yachts, on the Riviera, in America, and the Bahamas. Then the time came for a family, and that meant that Mari-Louis returned to Cape Town, taking on a freelance writing job for Oprah magazine. She started an accommodation business in the Northern Suburbs, which has been expanded and is managed by a company in the area.  Her husband builds super yachts in Europe, first in Holland and now in Montenegro. He visits the family in Cape Town half the year, and Mari-Louis and the children visit him where he is based for three months.

I lost track of what Callie had done in the past, but it included yachts as well, and America and the Bahamas too. In America they had their first joint project, baking an American wedding cake with butter cream icing, but struggled to get it through the doorway, it was so large. She needed a personal lift, and asked her husband to send her for cake decorating classes at The Wilton School in Chicago, taking every possible icing course available. She enjoyed the training and experience.

Six years ago Cakebread was created, now running from her house. 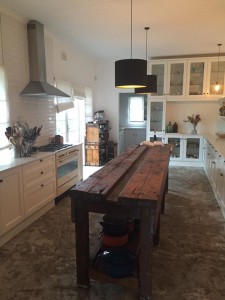 The studio is upstairs, and home is downstairs. A national retailer is the major client of Cakebread, Callie doing the shooting of TV commercials while Mari-Louis conceptualizes print and even packaging, working with the retailer’s agency. In addition, they do shoots for German brands Tchibo and lidl, and other international clients. As if they are not busy enough already, brother and sister have written six cookbooks (‘Cakes to celebrate Love and Life’,  ‘Markdag‘, ‘Cakebread Pudding & Pie‘. ‘Make Give Sell‘, ‘Cooking for Crowds‘, and ‘Sugar & Spice’) already, and another two are planned!

Mari-Louis was a guest visitor on the cooking program Kokkedoor, and a judge on Koekedoor Season 1 and now in Season 2. She raved about the powerful relationship she has with the Koekedoor Producer Sanet Olivier, and Koekedoor content producer and publicist Errieda du Toit, whom she described as her ‘creative muse‘. They contact each other in the middle of the night if they want to share a good idea. Mari-Louis said that she has been far more involved with the creative aspects of the program this Season. She admitted to being ‘cake-obsessed‘, having done a pie-eating tour in the USA, and visited 25 bakeries in one day with a guide in Paris, a gift from her husband! She cannot keep from trying new things and experience baking around the world, wanting to even spend some time in the One & Only Cape Town pastry kitchen, and in Montenegro when the family visits her husband.   She has created the most difficult and delicious cake baking challenges for the Koekedoor contestants in Season 2 to date, including a Brooklyn Blackout cake, lemon and citrus tarts, Tiramisu Charlotte cake, and Funfetti-Piñata cake.

Koekedoor Season 2 was shot over five weeks last October, Mari-Louis staying at Twee Jonge Gesellen in Tulbagh for the period, only coming home on Sundays. Her mother and the nanny were her support in this period. I asked whether there will be a Season 3 of Koekedoor, and Mari-Louis said that she does not know. I asked what her future plans are, and she said that she is more house-bound now with her children, therefore wanting to host more events and shoots at their Studio. 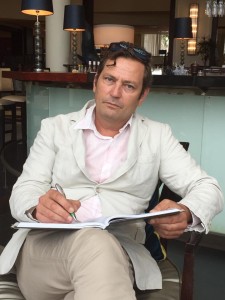 It is clear that Mari-Louis and her brother (left) cannot sit still, and their creativity knows no limits. They expressed their gratitude to have part of an afternoon off as a spoil, to enjoy the special teas offered by the One & Only Cape Town, and the savory and sweet elements of the Afternoon Tea Buffet.  I had not been to the Afternoon Tea for two years, and noted that there were no savory items on the Buffet. 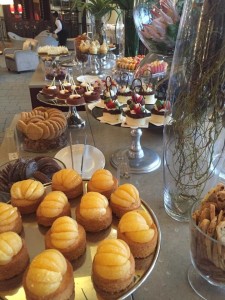 The duplication of treats on the Buffet has also been removed. The use of colour has been accentuated, a beautiful multi-colored collection of macarons serving as the centre point.  As a recent new user of Instagram, I could see great photographs coming out of the Buffet, some of which I have used in this Blogpost.

I was impressed that Pastry Chef Kyle Hickman, who has worked at the hotel for three years, and has been in charge of Pastry for the past year, knew that I have diabetes but don’t order anything special for it, and he is quite right!  Chef Kyle studied at the SA Chef’s Academy. What is 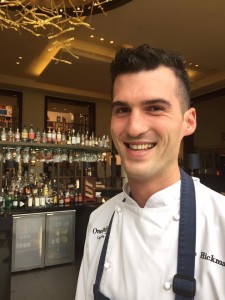 not widely known is that he has won the Irish Dancing Championships twice, having to put his love for dancing aside in favour of his job. He came to our table and explained that they have decided to take the savory items off 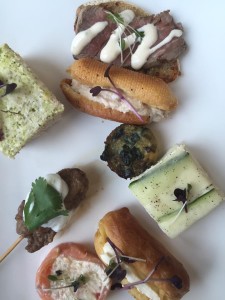 The Afternoon Tea Buffet offers a choice of 25 teas from India, China, Brazil, Kenya, Taiwan, Sri Lanka, and our country, and includes close to 20 items: 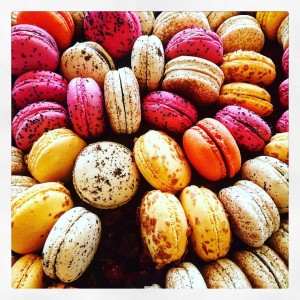 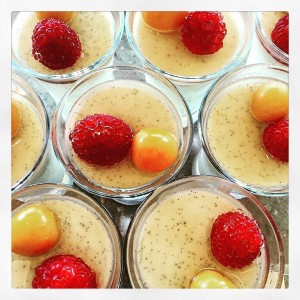 Another change at the Vista Bar is that all orders for tea and coffee will be accompanied by a cookie jar, oat crunchies being sent to our table to show us. Two or three options will be available per day, and 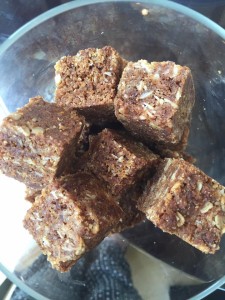 As a treat the bar staff brought us three tasters of their cocktail of the day, which was banana syrup, New Grove rum, and apple juice. Ian Manley, PR Consultant to the One & Only Cape Town, was also in the Vista Bar for a meeting, and had organized our Afternoon Tea.

It will be a different experience viewing the 6th episode of Koekedoor tonight, and seeing  Mari-Louis in action as a judge. The pre-publicity for the episode has revealed that the theme is a musical one tonight. I was taken by Mari-Louis’ bubbliness and friendliness, overshadowing her energy and creativity. I admire 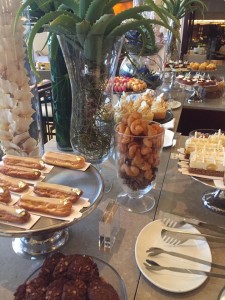 what she has achieved to date, and that she is able to run a successful business and organise her family life over two continents!