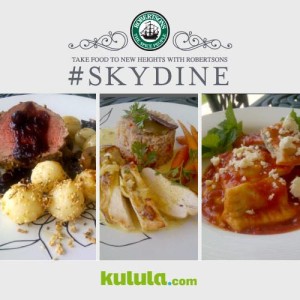 The Robertsons #SkyDine promotion is an interesting if not bizarre example of Partnership Marketing. Chatting to the brand’s Social Media Manager at The Ultimate Braai Master Cape finals on Saturday, he explained that Liquorice, the company he works for, only handled the Social Media aspects of the campaign.  Durban-based ad agency The Hardy Boys, handling the Robertsons’ account, conceptualised the campaign. A planeful of bloggers and food journalists from Cape Town (and Johannesburg) was invited by marcusbrewster, the campaign PR agency, to a surprise flight to Johannesburg, and on the return flight to Cape Town, Reuben Robertsons Riffel introduced the surprise 3-course meal which he had designed, and which was prepared by airline catering company Foodirections. Utilising plane crockery and an airline catering company, food plating and presentation was disappointing.  We recognised only 3 persons 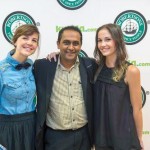 The goal of the communication campaign was to demonstrate that Robertsons herbs and spices can ‘add the right twist to a meal and create a culinary experience’, to quote marcusbrewster.   Giggling Gourmet chef Jenny Morris was on board the flight as MC. Riffel introduced his 3-course menu, emphasising that the flavours had to be stronger, due to the 35000 feet height at which the meal was eaten.  The starter was a feta and leek tartlet; the main course a pistachio and black pepper crusted beef fillet (or ‘fillay‘ as Riffel calls it!); ended off with a dessert of ‘milk-a-roon mini sweet short crust pastry filled with cinnamon and mixed spice custard and Turkish delight’, according to The New Age. Three further kulula flights from Johannesburg to Cape Town surprised its booked passengers with the same 3-course meal, without Riffel or Morris being present.

The collaboration between kulula.com and Robertsons makes no sense at all.  kulula.com passengers are unlikely to be regular cooks, while regular Robertsons’ users will be unlikely to fly regularly, hence there being little cross-marketing, the two brands being so dissimilar that they have no long term brand impact on the four plane loads of passengers who benefitted from the promotion.  Riffel looked completely unprofessional, wearing a plain white T- 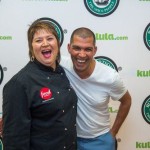 shirt, making no attempt to dress like a chef, perhaps recognising that he has no credibility as a chef anymore! Chef Jenny looked smart in her black chef’s top. However, having Chef Jenny on board must have caused confusion too, as she endorses other food brands (she has worked with competitor Knorr), and has her own food show on Food Network.  Riffel is a new MasterChef SA judge for Season 3, and we believe it is a conflict of interest for Riffel to be both judge of the reality TV show as well as continue to be the spokesperson for MasterChef SA head sponsor Robertsons! Riffel’s endorsement of Robertsons cost him all credibility as a chef, no serious chef using bottled herbs and spices in their restaurant kitchens, and Riffel has had to admit that he only uses them in his kitchen at home!  In the March issue of Hotel & Restaurant Riffel appears in a double page spread advertisement for Robertsons, making the non-believable promise to his fellow chefs: ‘By combining different flavours, you can transform a dish from ordinary to extraordinary and take your cooking to a whole new level‘! Surprisingly, Riffel wears a chef’s jacket in the advertisement, demonstrating his own personal confusion as to who he is and what he stands for! Fresh herbs and vegetables are the definite trend, contrary to what Robertsons represents. kulula is a low cost airline, an image which will rub off on Robertsons too, not good for its brand image.

Alex said that 90% of USA Forbes Top 100 companies, such as Ford, IBM, General Motors, Apple, and Microsoft, apply Partnership Marketing, pairing with a company in a different industry, to differentiate itself from competitors, to market one’s brand at low cost and lesser time, and to reduce risk, a win-win benefit for the brands. The biggest benefit of Partnership Marketing is not having to discount the price to achieve sales. Complementary strengths are leveraged, and the online customer base for both brands grows.  Even pop stars are collaborating, in singing together, attracting different sets of fans.  Riffel’s collaboration with a number of different top chefs at the One&Only Cape Town during the coming winter is another example of Partnership Marketing, yet is copy-cat marketing, in that many chefs are setting up one-day pop-up restaurants in each other’s venues, and have done so in the past two years.

Marcus shared his online Cape Town Magazine’s philosophy of ‘story telling not selling’, in communicating his 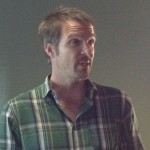 clients’ brands. His online magazine statistics are impressive, and they claim to have the largest English, German and Dutch readership, as high as 520000 per month, 48000 Facebook fans, and 54000 Twitter followers. Marcus said one must facilitate Word of Mouth via Social Media Marketing, to attract new clients.

One Up Agency works with companies to develop Partnership Marketing for them, often utilising Cape Town Magazine.   Perhaps Robertsons could make use of their services to develop a more credible partnership for its brand than associating it with a low cost airline!

5 replies on “kulula and Robertsons #SkyDine demonstrates Partnership Marketing, but is it credible?!”