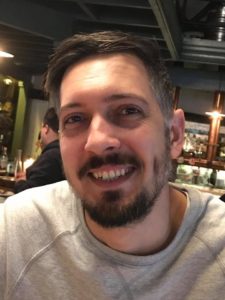 Pastry Chef André Steyn joined La Colombe just over a week ago, having worked at Delaire Graff for over three years. He attracted my attention with his creative desserts as well as forest Amuse Bouche presented in a glass bowl whilst he worked at Delaire. The Chef once had a dream to become an architect, and it is our restaurant industry’s luck that his life path led him to cheffing.

Chef André and I never managed to connect at Delaire Graff in the time that he worked there. Reading on his Facebook page that he had just started at La Colombe, I contacted him, and requested that we meet, so that I could interview him. We met at La Parada Constantia Nek on Sunday afternoon.

Chef André grew up on the Garden Route, initially in Knysna, then Sedgefield, and Wilderness, Albertinia, George, and then Mossel Bay, his late father being a manager in the area. His first hospitality job was as a waiter at the Mugg & Bean in Mossel Bay, before he went to use his new experience in the U.K., at Ernst & Young, where he was a function organizer. He went to the U.K. to make money, and returned to study cheffing at Capsicum College in Cape Town over a two year period. He did internships at Platinum on Watson Street in town (which became a favorite when it became What’s On) soon after, and Chef André was left penniless when the restaurant closed down suddenly. He was luckier working for his Hot Kitchen internship at Aubergine with Chef Harald Bresselschmidt for six months. He started full-time employment at the Table Bay Hotel, in Pastry, but the Pastry Chef he was to learn from left soon thereafter. He started there as a Commis Chef, but soon moved to Jardine when it was still on Bree Street, and run by Chef Eric Bulpitt. When Jardine moved out of Cape Town, Chef André moved to The Test Kitchen, spending a year there as Pastry Chef, working with Chef Luke Dale Roberts, whose strength was not Pastry related, but he challenged Chef André to come up with pastry recipes with ingredients that he was working with in other dishes, such as beer. Chef André praised Chef Luke, saying that he ‘unlocked my mind’. But the pay was bad and the hours long, one being expected to be grateful for working at the top restaurant in our country. This changed when Chef Luke was taken to the CCMA for his employment practices!  A stint at Cassis in its factory followed, for Chef André to learn French Pastry, but he left after a short time, promises made not being delivered on. He moved to the One&Only hotel, running its bakery, High Tea, and functions. An outside chef was brought into the hotel and promoted above Chef André, and so he left.

Finally his lucky break arrived with his appointment at the Delaire Graff main restaurant three and a half years ago. He worked with Chef Christiaan Campbell, who taught him about fresh organic food produce, and challenged him to use it in his desserts as well. Chef Christiaan moved to Boschendal, and Chef  Michael Deg took over from Chef Christiaan. They got on well, and Chef Michael gave him a larger kitchen space. Every Friday a starter, main course, and a dessert dish changed on the Delaire menu. Chef Michael motivated Chef André to come up with new dessert dishes. As Chef André’s time at Delaire Graff came to an end, he was connected with Chef James Gaag at La Colombe, and accepted the offer to  become the Pastry Chef, as the former La Colombe Pastry Chef is opening La Petite Colombe in Franschhoek with Head Chef John Norris-Rogers at the beginning of August.

I asked Chef André where his love for Pastry came from, and he said that it was not from his mother. He did not like working with meats like rabbit, nor with crabs when they lived in Knysna, having a sensitive palate. His Chef hero is Chef Antonio Bachour, of Bachour Bakery & Bistro in Miami, who was named as one of the top ten best Pastry chefs in America.

La Colombe re-opened after a winter break just over a week ago, and it appears that the interior decor has been lifted. Chef André had the challenge to create two new desserts, a bread dish, and a palate cleanser when he started:

#. The palate cleanser is now offered to arriving patrons in Reception, the first time that La Colombe is doing this. It is an apple and dill liquid sphere. 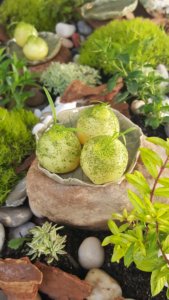 #   The bread dish is part of the menu now, and consists of a hemp and black sesame-enriched baguette, which one breaks open and dips into a lamb dripping and dukkah sauce, an interactive dish. 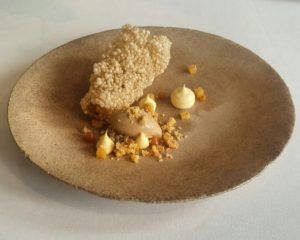 #   A chocolate dessert has been created with 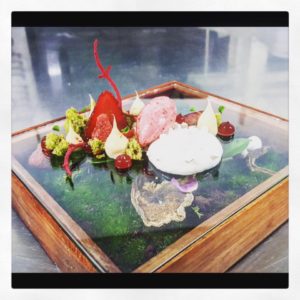 Chef André is already working on new desserts, planning to change them once a month. I cannot wait to return to La Colombe, to see the new interior changes, the new menu, and the new dessert dishes. Many in the industry, and locals too, are rooting for La Colombe to become the number one Eat Out restaurant in November!