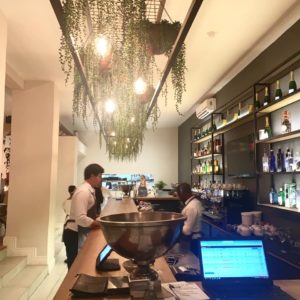 I have visited La Paris estate outside Franschhoek a number of times since it opened towards the end of 2017, but never in the evening. I was invited by Chef Nico Vorster to try the evening fare and live music of the La Paris Bistro last Friday, the only day of the week on which the restaurant opens for dinner.  We loved the good music, and the cosy comfort food.

I attended the Franschhoek Literary Festival last weekend, so it was a perfect opportunity 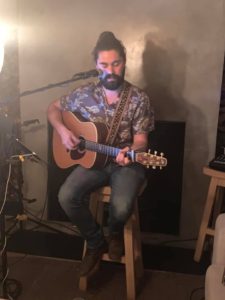 to drive through to La Paris, bringing along my friend Vivian Warby and her friend Pieter van Zyl. Vivian and Pieter attended a Literary Festival function in the early evening, so we arrived at the Bistro at about 20h00, to a buzzing full restaurant, cosy with its lit fireplaces, and guitarist Chris Rein performing, sporting an attractive man bun.

La Paris is a wedding venue, has a Deli, and operates the Bistro, offering Breakfasts and Lunches, as well as the Friday dinners. It opened in September 2017, and Chef Nico Vorster has been at the 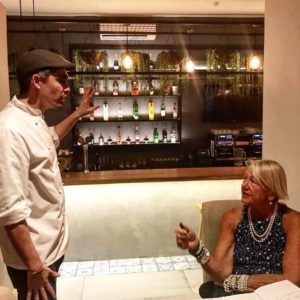 helm of the Deli and the Bistro from the beginning. He previously worked at Bloemendal Restaurant, Maliba Lodge in Lesotho, Terra Del Capo at Anthonij Rupert Wines, and at Disney in Orlando.  What I like about Chef Nico is that he is dedicated, and works hard at what he and his team offer at La Paris, staying out of restaurant politics.

When the estate opened, it was headed up by GM Alice Mfundisi, vivacious and hard working, but she has moved overseas. The design is by interior architect Ashleigh Ratcliffe. The estate belongs to the Rodenburg family, specialists in security fencing and based in Paarl.

The Deli stocks biltong and droë wors, vegetables and fruits, a variety of breads, a selection of cakes, brownies, fudge, and macarons, cheeses, preserves, coffees, wines and more. The estate dates back to 1699, and has been transformed into a modern estate in a picturesque setting, surrounded by mountains, with a dam and jetty, vineyards, lush gardens and water features, accessed from the large parking area by a 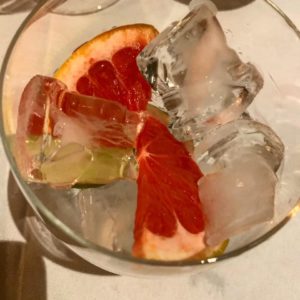 The cuisine style at the Bistro is Farm-to-Table, with vegetables, fruit, and herbs in part coming from the estate garden. The Bistro has an eight-seater Bar with a selection of Spirits and wines. We were welcomed with a trolley of gins, mixers and botanicals, and Pieter and I both chose Tanqueray, to which I requested ice only, as well as a slice of grapefruit and of lemon, juniper berries, and some dried lavender. Other gin brands offered are Inverroche, Six Dogs, and Bombay Sapphire.

Before we had ordered, our waiter Freedom brought a bread board of baguette, with a whipped butter of sundried tomato, parsley, and olives, topped with a basil leaf. We should have held back on the bread, had we known how generous Chef Nico’s portions are. Cutlery is by Nova, a quality brand. Oryx desert salt and black pepper grinders are on the table. A quality cream A5 menu is offered, from which one can choose a selection of Starters and Mains, at reasonable prices.  In addition, a board offers a variety of Vegan dishes, which impressed Vivian. Our waiter was not up to 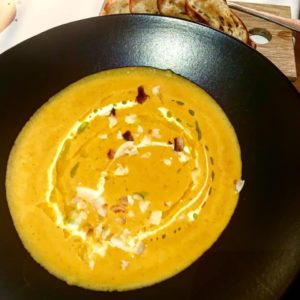 speed on all the dishes and their ingredients, but was willing to go back to the kitchen to ask.

For Starters we ordered a Curry Coconut soup from the Vegan Menu (R95), which Pieter declared as being delicious, the best soup he has ever tasted, loving its balance 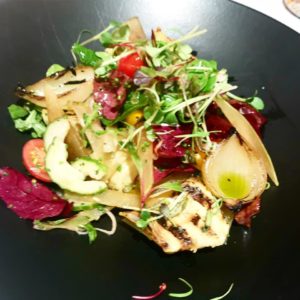 of flavours. Vivian’s choice was a Grilled Artichoke and Pear salad (R125), a light start to the dinner, with greens, onion, cucumber, and tomato added, served in a bowl. I indulged in a Mushroom Risotto, topped with Parmesan shavings and truffle oil, real comfort food, despite having given up carbohydrates, but loving 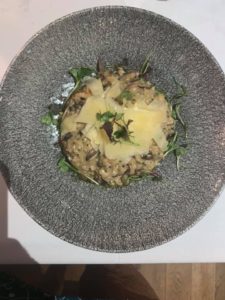 I eat very little meat, but could not resist the main course of herb-crusted rack of lamb, served with 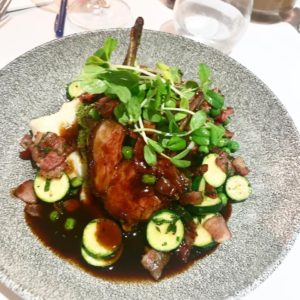 mash potatoes, and a fricasee of bacon, peas, and mint (R185). I could not finish my plate, not used to such large portions. Pieter kept it meaty too, loving his Pork fillet, stuffed with olives, Brie, and sundried tomatoes, a colourful dish with butternut crisps and 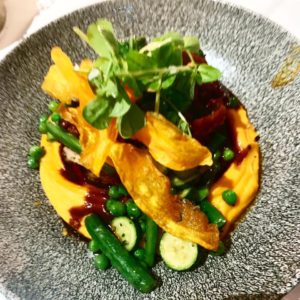 sweet potato mash (R160). He paired this dish with a glass of Franschhoek origin Topiary Shiraz 2013. Vivian’s Vegan dish was a combination of tempura broccoli and beans, 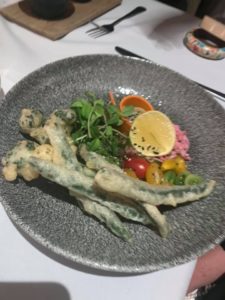 and pickled ginger, carrots, and added tomatoes, avocado, and cucumber, with a little pot of Basmati rice served on the side. (R150).

Other main course options were the Catch of the day, kingklip offered with gnocchi filled with tomato, olives, and green beans (R175), 200g Beef fillet (R198), and Vegetable Stir Fry with a poached egg at R150.

Chef Nico came to chat at the table after the main course dishes had been cleared.  He told us that they are busy 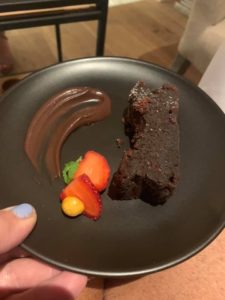 constructing a Boutique Hotel on the estate, with its own 20-seater restaurant.

Front of House Manager Eunice rolled the Dessert Trolley to our table, and Pieter could not eat anything else, after his soup and pork dishes. Vivian was open to trying a gluten-free Chocolate Brownie (the dark plate did not highlight the Brownie on it 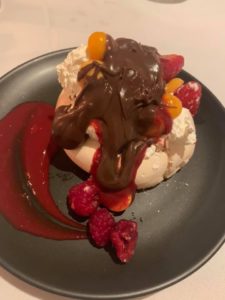 well) , while I requested a Pavlova, with a meringue, berries, cream, a berry sauce as well as chocolate sauce, total indulgence. Other Dessert options, at an unbelievable price of R20, were Pasteis de Nata, Blueberry Cheesecake, Fudge (cinnamon and honeycomb, cranberry and pistachio, coffee and chocolate, and peanut butter), and Macarons (cookies and cream, passion fruit, Turkish Delight, and chocolate).

All in all, it was a feast of a dinner, and we were very grateful to La Paris and its Chef Nico for hosting us so generously.