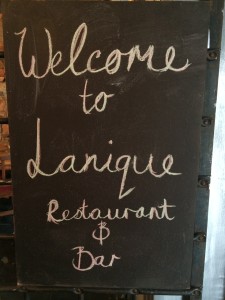 A month ago we were given the scoop of the then planned opening of Lanique Restaurant & Bar within Andiamo in the old Cape Quarter, which opened in the record time of two weeks thereafter.  The former Andiamo Deli space is unrecognisable as the new Lanique Restaurant & Bar, and its new look reflects the history and heritage of the Lanique spirit.

The venue is named after the exclusive Lanique 200 year old Polish crafted liqueur made with Attar of Rose, the oil said to be worth  its weight in gold.  A former employer of Nigel Price, Lawrence Huggler from Jersey, liked the liqueur so much that he bought the brand!   Nigel has 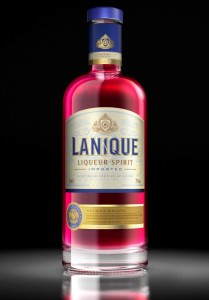 been given the right to distribute Lanique in Africa, and Australia and New Zealand will follow.   The Lanique Restaurant and Bar within Andiamo is a collaboration between Nigel and Andiamo owner Bruce Walker, who got to know each other as Nigel’s mineral water company aquav supplies Andiamo.

The previous Deli space has been cladded with red brick, to give the space an old world feel.  A 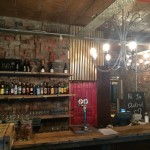 stage for live music, a dance floor, and a door separating Andiamo restaurant and Lanique have been built.   Tables and bar stools have been made from wood, a banquette has blue and gold upholstery, and chandeliers have been added.  During the day the Lanique Bar counter will be closed off, but lunch will be served and its coffee bar will be open throughout the day. The Lanique Bar within Andiamo will stock a full complement of spirits, beers, and wines, and its liquor licence will allow it to remain open until 2h00.  Electro Swing Alternative is played when the dance floor operates.  Free wifi is offered, and finds one’s phone automatically, without a password needed.

The Lanique Restaurant & Bar will become the headquarters of the Lanique brand, where tastings will be held, 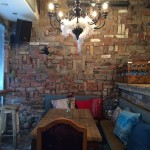 to introduce South Africans to the luxury brand.  The signature drink is Lanique and Lime, but other cocktail suggestions are Lanique mixed with Champagne, Lemonade, Tonic, Soda, or Bitter Lemon. 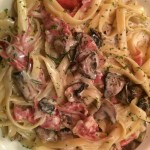 I was invited by Nigel to attend the opening party, with a Mafia theme, as well as to a subsequent dinner, for which I chose a half portion of mushroom and parma ham pasta (R89), an ideal winter dish. Nigel ordered the Quatro pizza (R97), and we shared an enjoyable bottle of Kronendal Mirari Syrah and Viognier blend 2009 (R295).  I like that the winelist consists of wines from wine estates which order Nigel’s aquav water brand, including Constantia Glen, Anthonij Rupert Wines, Diemersdal, Glen Carlou, Rickety Bridge, and L’Ormarins.  The house wine is from Place in the Sun, at R25/R99 for the house white, and R29/R119 for the house red. 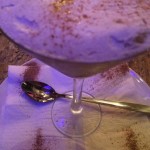 I love Tiramisu (R49), and enjoyed it, its colour in the photograph influenced by the lilac evening lighting.  Andiamo has an extensive lunch and dinner menu, with salads (R57 – R79); pizzas from R54 upwards, to R99 for a Pizza di Pesce with prawns; pastas from R57; fillet (R148), Karoo lamb chops (R145), lamb shank (R139), and chicken and veal dishes; and desserts from R38 for malva pudding upwards. 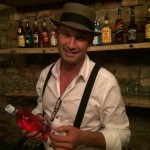 Nigel is planning to create a ‘home away from home’ for Lanique Restaurant & Bar, with good and unpretentious service.  He welcomes feedback, a breath of fresh air.