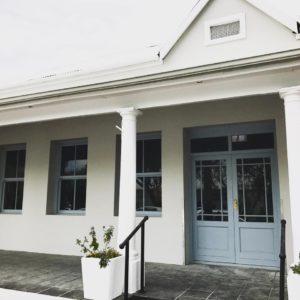 I was very excited to sit with Chef Darren Badenhorst yesterday morning, to hear more about his new restaurant Le coin Français By Darren Badenhorst, which will open in Franschhoek on 11 October.

Previously a space well-known as Kalfies, followed by Piccolo Restaurant in the same space, Chef Darren grabbed the space, buying the lease and all assets from the former owner, recognizing the value of the space and its location at the top end of the main road of Franschhoek, in an up and coming area with properties owned by the Leeu Collection, and next door to the newish Woolworths and its WCafé. He promptly sold all the assets. He described his relationship with Greek owner Peter Coubanis as excellent, with Peter allowing him to make internal changes to the building to suit the restaurant requirements, making this a long term investment into his building by Chef Darren, and ensuring Peter growth of his asset.

Short of using an architect to submit plans to break through the very thick wall to create an open plan kitchen, the new restaurant design has been a Badenhorst family affair, with his sister Kirsty doing the interior design via her KB Interiors company in Durban, and his stepfather doing the lighting, an expert in the field Chef Darren said. His parents have travelled to Franschhoek from Durban regularly, being equally excited about the new restaurant project.

Chef Darren has been at Grande Provence for seven years already, but always had a dream 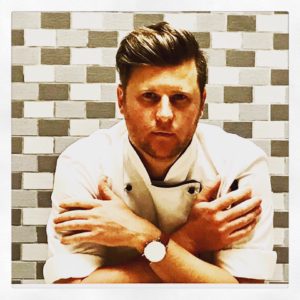 to own his own restaurant one day. He has been looking for a suitable space for a long time, not only in Franschhoek, and even considered a family property in Durban at one stage. He is delighted that he found this Franschhoek property,  and that he found the interesting name for it by Googling ‘French Corner’, and finding Le coin Français, a former name for Franschhoek, an unknown fact to most locals.

He has or currently is installing new loos, new ceilings, new vinyl flooring, and the building is getting a complete make-over inside, while the outside has been painted by the building owner. I saw the beautiful stainless steel staircase in the building, after meeting with Chef Darren, which he had cleaned up to return it to its former glory. It leads to a mezzanine floor for an office and meeting space but will eventually become a private dining space. One section of a wall will be filled with logs, cut from alien trees on the Haut Espoir farm, supplied by owner Rob Armstrong. The colours of the restaurant interior are earthy, with a light flooring colour, 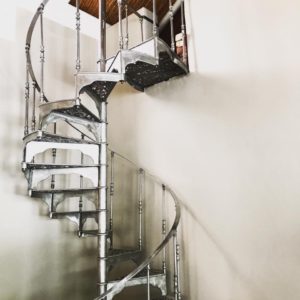 and light fittings (which I have not seen before) are a mix of wood and concrete, for which Chef Darren found matching salt and pepper grinders with the same material mix. Walls will be hung with photography art supplied by Is Art, an unusual art form, in black and white initially. A fireplace has a stainless steel flue. The tables have been custom made in Durban, while the inside grey fabric-upholstered chairs come from Weylandts, and the outside ones from Woodbender. A total of 40 patrons can be seated inside, and 20 on the outside terrace.

The kitchen has walls with white and grey mosaic tiles, creating an unusual effect. Chef Darren welcomes having an open plan kitchen, and encourages his diners to come and chat to him at the pass.

The restaurant will serve French-inspired dishes, three courses at Lunch and four courses for Dinner. The Tasting Menus will change as the seasons change and when Chef Darren wants to. Chef Darren is working with all his local suppliers, who have become close friends over time. The dinners are planned to be four to five hours long, being an interactive exploration of flavours and textures. Each dish will have a story relating to Chef Darren and his food memories, embodying ‘art on a plate’. He wants to take his diners on a food journey.  The menu will be affordable at a Franschhoek level, Chef Darren promised.

I was impressed to hear how closely Chefs Darren and Chris Erasmus of nearby Foliage are working together, to ensure that they do not duplicate dishes or dominant ingredients.

Crockery is from France, supplied by Sublime Table Brands, while cutlery is by Churchill, the same brand which his parents have in their home, and which Chef Darren sourced via Banks.  Tablecloths will be used for the Dinner service.

Nash is the senior wine steward, at the third level of his wine qualification towards becoming the Sommelier. Chef Darren will focus on wines from Franschhoek, but not exclusively. He will select the best and more unusual local wines, alongside wines from other areas, and will also add wines from six wine regions in France in a Sommelier’s Selection on his winelist. The beverage focus in the restaurant will be on wines rather than on gins or any other spirits.

The restaurant staff will start a week ahead of the opening date, meeting the food and wine suppliers of the restaurant, to learn more about their produce.

Chef Darren will only leave Grande Provence, with their blessing, when their still-to-be-announced Chef has settled in and has spent time working alongside Chef Darren. Grande Provence owner Alex van Heeren has been extremely supportive of Chef Darren’s venture, and pops in at the building site regularly, to check on the progress.

The planning for the restaurant is clearly meticulous, and Chef Darren, a youthful 32 year old, has everything under control, showing me design boards, with photographs of lighting, the flooring, the

chairs, the salt and pepper grinders, the mosaic tiles, and other interior design aspects. The opening of Le coin Français By Darren Badenhorst will be an exciting lift to the gastronomic offering of Franschhoek, already at an elevated level, with Foliage, Maison, and La Petite Colombe restaurants operating in the village.