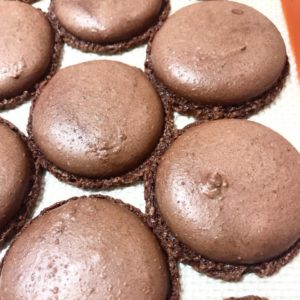 On arrival, we were issued with a chef’s hat, a chef’s jacket, and a long apron to wear, I feeling 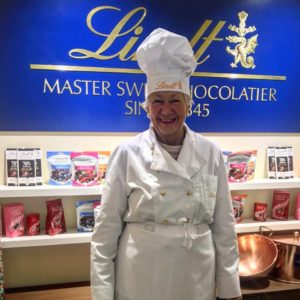 very bulky in it, it being on the large side. We were allowed to choose a table, with three or four places set up. Aurélie and I did not have to share our table. Each table had at least one KitchenAid set up, with a Macaron piping mat, a piping bag, two spatulas in different sizes, and a ready-made bag of chocolate ganache. As a treat a Mint Lindor chocolate ball completed the place setting, being their newest flavour. Water was available from coolers, a choice of still or sparkling. 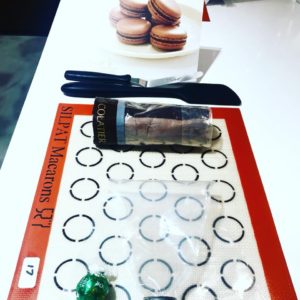 I was impressed with what looked like super large Samsung speakers, but they are air conditioners, important in keeping the Studio at a cool temperature. 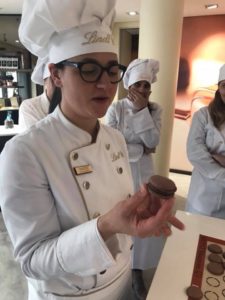 Chef Daleen was in charge, and she guided us in each step of the process, giving clear instructions, and demonstrating each step. She told us upfront that macarons have ‘lace’ or ‘feet’ when they are baked, and that they are meant to look like this. There are two methods of making macarons, the ‘cold method’, or the Italian method. We were taught the former method. She also shared that it is more accurate to use grammage as a measure for ingredients, rather than spoon size, which can vary. A kitchen scale is required for accurate weighing of ingredients. 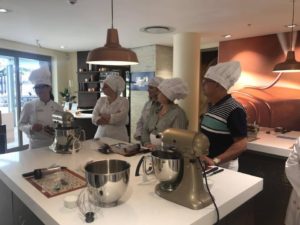 Egg whites (75g) and some egg white powder (1g) had already been placed in the metal mixing bowl of the KitchenAid. We had to whisk it at full-speed for 3 minutes, but after a minute we were to add the castor sugar (75g) into the bowl while it was whisking. Chef Daleen emphasised the importance of accurate timing in baking, and she had a timer, telling us when to start and to finish. We had to change the attachment, taking off the whisk, and adding the paddle attachment, adding ‘tant pour tant’, a French term meaning ‘equal quantities’, in our case 87g each of ground almonds and 87g icing sugar. We also added 15g of cocoa powder. We were to beat this for 30 seconds on the lowest setting. Then we had to remove the paddle attachment, not being able to resist licking off some of the dough, and use the spatula to carefully fold the dough, to make sure that all the ingredients were well mixed, but not overly so, we were warned.

When our dough was ready, we were shown how to add it into our piping bag, the dough being 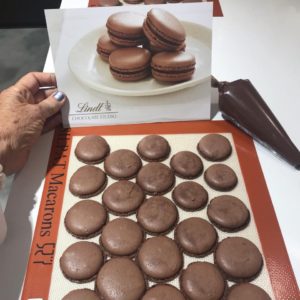 somewhat more than required for the number of macarons we were baking. We had to pipe the mix onto the mats with 28 circles in them, a squeeze down and lifting with a little twist. This was hard to do, as the inclination was to do a circular movement while piping, but this should only be done when lifting the piping bag to do the next one. My macarons had quite a few tails from the piping, and this seems to be a common problem. Each of our numbered mats was placed on a baking tray, and beaten with a mallet to get the air out of the macarons, and this automatically addressed the tails, and flattened them into the Macaron circle. The macarons were baked for 14 minutes at 240C, and then cooled down for 2 minutes.

The support service is fantastic. As soon as we had finished using an attachment, or a baking aid, a staff member came to collect it, which meant that our work space was as neat and clean as possible. 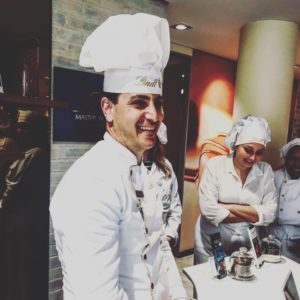 Whilst the macarons were baking, Head Chocolatier Dimo Simatos told us more about the production of chocolate, and allowed us to taste some aspects of it. He confirmed that chocolate macarons are the best selling, of the varieties they sell in their shop. The cocoa tree best grows 29 degrees north and south of the equator. Lindt sources cocoa beans from Ecuador, Ghana, and Madagascar. The Ghanaian cocoa beans are very consistent in their quality. The cocoa tree can grow up to 10 meters, and its pods are spread all over the tree, and they flower and make pods all year round. Inside a cocoa pod about 40 – 60 cocoa beans are surrounded with a white layer. The pods are allowed to ferment, and then dried in the sun, which removes the white layer after seven to ten days, the coffee beans packed into 64 kg jute bags. Each chocolate produced by Lindt has a different cocoa content, and hence a different recipe in making it. A higher cocoa content tastes different.  The complete chocolate making process is mechanized, within a sterile and clean environment.

Lindt is the common name of the company, but it was in fact a Herr Sprüngli from Zürich who bought the factory of Robert Lindt from Bern, the latter having created a machine to keep chocolate liquid. Lindt is not the largest chocolate producer, but is a medium-sized premium producer. We were shown how cocoa beans are broken down into cocoa nibs, and then further reduced in size to 2mm nibs. Cocoa is high in anti-oxidants, keeping one young. Chocolate is made in different proportions of sugar and cocoa. Milk chocolate has the lowest proportion of cocoa, and more sugar. Milk used for chocolates production tastes different, depending on where the milk comes from. Interestingly, Lindt does not sell cocoa powder to mix into milk in our country. The talk was completed with a tasting of Lindt Raspberry Dark chocolate. We were guided to taste it with the five senses: smell when opening the wrapper, visually it has a nice shine, orally in listening to its 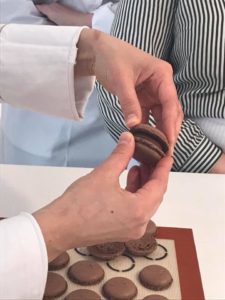 sound when breaking a piece in half, and the mouthfeel, one advised to allow it to melt in one’s mouth and to not bite it. It should have a clean finish once having tasted it.

Then it was time to return to our work stations, and to pipe the chocolate ganache, 100g of cream mixed with 100g Swiss Classic Dark Chocolate having already been mixed for each of us, and placed in a piping bag. We had to pair the Macaron halves in size, and then squeeze the ganache onto the bottom half, and then too it with a lid. Some of my tops were sensitive to being pushed on top of the bottom half and ganache, and only one of the 14 macarons broke in this process. Macarons should be placed in an airtight container and kept outside of the fridge. They are best eaten a day after being made.

We were mighty proud of our 14 completed macarons, which we were allowed to take home in a neat Lindt box, with a sticker to keep it closed. We shed our uniforms with happiness, and headed for the Lindt shop, where we were offered a 10% discount in our purchases. It was a most enjoyable two-hour course, a perfect gift to oneself or to a friend, at the cost of R345.