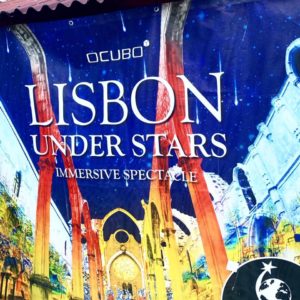 Prior to starting my Portuguese Coastal Camino from Porto, I spent three days in Lisbon, sightseeing as a tourist. One of the highlights of visiting the city was the 360 degree audio and light show ‘LISBON UNDER STARS – immersive Spectacle’, performed in the open air ruins of the Carmo Church, now an archeological museum.
I had read about the show ‘Lisbon under Stars’ in the TAP inflight magazine whilst flying from London to Lisbon, and when my friend Arno and I walked last the ticket booth by chance, it was meant to be, and we booked and paid for tickets for the following evening.
On arrival, with Arno running slightly late, 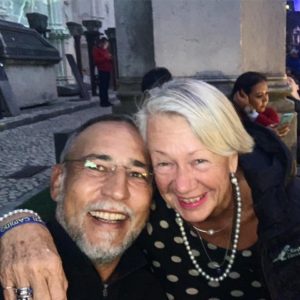 I queued to get inside, not knowing what the seating would be like. It appeared that our tickets had been booked for the night before, but the ticket office was very kind to swop our tickets for the correct evening. Just then Arno arrived, and we went inside, not knowing what awaited us inside.
A few chairs had been set up, and some cushions. Fake lawn had been rolled out in some sections, and the idea was to find a comfortable spot from which to view the 360 degree show, set in the unrenovated Carmo Church, which was a victim of the famous Lisbon Earthquake and Tsunami in 1755.
The show was preceded by lit up Archeological treasures in the shared space, making them
look surreal, and very modern. And then the lights went down, and a series of historical and cultural events in the history of Lisbon and Portugal was communicated in a modern visual, audio, dance, and musical story and show, one having to look forward, backward and sideways to not miss out on anything.
A 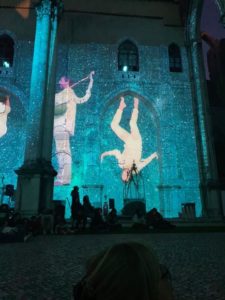 female figure represented Lisbon, being the storyteller. The Programme describes it best: ‘You are entering a time travel machine that will transport you on an immersive journey through more than 600 years of history, glories and tragedies of the Portuguese people.’
The following historic highlights in Lisbon’s heritage are represented :
#. Prologue
#. 14 August 1385: Battle of Aljubarrota: 7000 Portuguese defeat 40000 Castilians and ensure the independence of Lisbon.
#.  1389 Construction of Carma Church to celebrate the victory of the 1385 Battle of Aljubarrota.
#.  1423: Dom Nuno Alvares Perreira becomes a Carmelite monk, donating all that he has to the Order of Carmo, joins the Convent, and dedicates himself to a monastic life until his death.
#.  8 July 1497 Vasco da Gama leaves Lisbon, to discover the sea route to India. Almost a year later he arrives in Calcutta.
#. 1 November 1755: The great Lisbon earthquake, the firestorm, and the tsunami, which 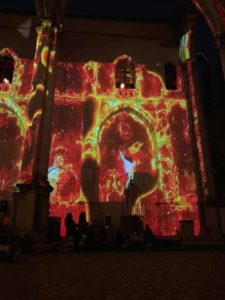 ‘submerged Lisbon’s lower zone’.
#.  1756: Reconstruction of Carmo Church: the monks dedicate themselves to the reconstruction of the Carmo Church by their own means.
#.  1834 : Extinction of the Religious Orders’: all religious orders are abolished, and the monks leave Carmo Church
#.  1864: Foundation of Carmo Archeological Museum on the foundation of the 1755-destroyed  Carmo Church.
#.  23 July  1920: Birth of Amália Rodrigues, becoming a Fado singing star.
#.  25 April 1974: The fall of the dictatorship, celebrating 48 years of dictatorship in Portugal
#.  Today: Free Lisbon. Multicultural Lisbon. Lisbon Under Stars. Celebration of Lisbon’s Urban art, and cultural and historic heritage.
The show is short at 45 minutes, but is highly recommended.
LISBON UNDER STARS. Carmo Archeological Museum. Lisbon. www.lisbonunderstars.com

Dear reader: Due to the hacking of our Social Media accounts, you may need to follow our Facebook again, the hackers having removed 2000 Friends; and our Instagram account, the account having been deleted completely, and now replaced by me with a new one (new handle below).