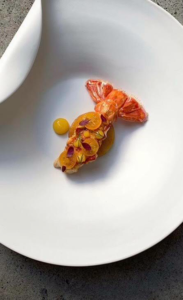 It was a Facebook post by Chef Jan-Hendrik van der Westhuizen of South African/French restaurant JAN in Nice that alerted me to the Hospitality Counsel 2019 ranking of our countries top ten Restaurants as well as Chefs, when he thanked them for being included in the Top 10 Chef List. No other restaurant or chef on the two lists appears to have announced the accolades from the Hospitality Counsel, awarded at an event called the 2019 Luxury Tourism Awards!

i had to Google the Hospitality Counsel, and found out that it is based in Sandton, which may explain its weighting towards Gauteng restaurants and chefs. Its website states: ‘HOSCO is a Management Consulting firm that services the South African Hospitality Sector, by means of making significant improvements to an organisations (sic) sustainability and growth. At the Hospitality Counsel we aim to facilitate and execute the implementation of fundamental  operational processes an organisation requires to be industry leaders. We have highly skilled consultants whom (sic) their expertise with the purpose of creating organisational growth by means of various consulting services’. Recruitmentt, Training and Development, Web and Graphic Design, Social Media Management, Travel Management, and Events Management are the services offered.

The Top 10 Restaurants and Top 10 Chefs lists are presented in a section on the company’s website entitled ‘SA’s Finest’, with the scant introduction to it ‘Celebrating the finest contributions to South African tourism and hospitality’, also recognising Top 10 Hotels, Boutique Hotels, Game Lodges, and Guest Houses. No award criteria are provided at all!

The Hospitality Counsel 2019 Top 10 Restaurant List is the following:

My comments about the ranking: The Restaurant at Waterkloof has established itself as our country’s Best Restaurant since the 2018 Eat Out Awards. What I love is that I have seen no Chef ego coming to the fore, and no additional restaurant openings as a result of this stature in the past year.

The chefs at La Colombe must be rubbing their hands in glee to be ranked higher than the Test Kitchen, which has dominated our restaurant awards for too long. The Shortmarket Club is the odd one out on this list, in the Luke Dale-Roberts stable, about which I have heard nothing but disastrous descriptions about its service. Marble is an informal restaurant which also does not belong in this fine-dining restaurant list. Ego Chef Peter Tempelhoff must be devastated that his FYN restaurant is not fine enough to have made the Top 10 List.

To have a Top 10 Restaurant list with four out of ten restaurants in Gauteng already lacks credibility at first glance!

The Hospitality Counsel 2019 Top 10 Chef List is the following:

My comments about the ranking: Bizarre list, and this is where the credibility of these awards falls apart.

Let me start by stating that Chef Jan-Hendrik, with his one Michelin star restaurant serving South African dominant food with a French twist, deserves to be our country’s number one restaurant and chef, even if it is located in France! But seeing how Chef Jan-Hendrik’s ego has grown in each of the four years since receiving his Michelin star, he will be devastated to be given such a low ranking, an insult to this talented chef, of whose cooking skills and creativity I am a huge admirer.

Excluding Chef Rikku O’Donnchü, formerly at Gåte restaurant where he caused a huge stir with his creative Tasting Menu, and opening his own fine-dining restaurant Exhibit A shortly, deserves a listing. Another reflection of this List’s credibility, or lack of!

Another hurt ego on this list will be Chef Luke Dale-Roberts of The Test Kitchen, once our restaurant kingpin, but losing his touch since his ego grew as the restaurant climbed up the World’s 50 Best Restaurant list, only to face a stupendous crash out of the list  in 2017.

The La Colombe chefs too must be severely hurt, a karmic payback no doubt in banning me from eating at their restaurants due to my Spek & Bone Review in 2016!

Chef Chantel Dartnall is the most undervalued chef in our country, yet widely recognised internationally, and constantly grows her knowledge of cuisine through international visits. Despite being a huge supporter of female chefs, the other three female chefs do not belong on this list. Adriaan Maree is an unknown chef to us in the Cape.

As above, Chef Peter Tempelhoff, whose ego knows no bounds when he banned me from eating at his FYN restaurant just before it opened last year, but reversed under legal pressure, must be fuming that he did not get a mention on this list, Chef Liam Tomlin must be angry too, in being left out from this list too.

One restaurant that created a stir this year is Wolfgat, glaring in its omission on this list.

The 2019 Eat Out Awards take place on 17 November. It will be interesting to see what the top Restaurant ranking will be for this year!