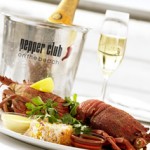 Cape Town and its surrounding towns are seeing a flood of restaurant openings and relaunches, to such an extent that one wonders how they, and all the existing restaurants, will be full when the Festive Season is over.

New restaurants that have opened recently are the following:

*   Kuzina is a Greek restaurant in the Cape Quarter, which opened last weekend

*   Salt Deli opens later this week, in the space that was Carlucci’s in Bantry Bay, across the road from the Ambassador Hotel and its Salt restaurant.   Its interior is Stefan Antoni designed, with an eclectic flooring mix of slate, wood and tiles, and an eyecatching desk which looks like a pile of wood.  It has a staircase to an upper level, and the deli will serve oysters and bubbly.

*   Eight has just opened at Spier outside Stellenbosch

*   Vaudeville opened as a supper club in the city center a week ago – its show is outstanding, but it needs work on the menu and food preparation – read our review here

*  The Grand on the Beach has only recently received its liquor licence, and is fully booked for dinners 2 weeks ahead.  Lunch bookings can be made more quickly.  The newest of the three Grand Cafe’s, it is located on the beach between the Water Club in Granger Bay and the V&A Waterfront.

*  Truth.coffeecult is a new coffee shop and roastery, and has opened in the hard-to-find Prestwich Memorial center on the corner of Somerset and Buitengracht Streets, owned by David Donde

*   Warwick’s gourmet picnics, designed by chef Bruce Robertson, opened at the beginning of the month on Warwick wine estate outside Stellenbosch

*   DeliCATessen has opened at Tokara wine estate in the Helshoogte Pass, and is owned by Tokara owner GT Ferreira’s daughter

*   Cafe Chic is a new French-style restaurant in a beautifully renovated and chic building on Breda Street in Gardens. Read the review here

*   Bistro 1682 has opened at Steenberg wine estate in Constantia.

Restaurant relaunches include the following:

*   Sapphire is a new bar serving snacks, redecorated and renamed from the previous Baraza, next to Blues in Camps Bay

*   St Yves is the new nightclub in the place of Ignite in Camps Bay, above Pepper Club on the Beach

*   Pepper Club on the Beach is the new restaurant previously called Summerville in Camps Bay, above Paranga.   It is linked to the Pepper Club, a hotel/apartment block opening in the city centre (on Pepper Street) in February. It will offer Pepper Club hotel clients changing rooms, when they return from the Camps Bay beach.  Dinner Dance “in the tradition of grand Old Hollywood” is offered on Friday and Saturday evenings.  The Group Executive Chef is Michelin-starred Carsten Kocke, who has 30 years of experience in Germany.   The menu contains a selection of starters such as Avocado Ritz (R 79) and Lobster Cocktail (R 98); crayfish, prawn and avocado, and Caesar salads; seafood dishes such as salmon, calamari, and prawns; steaks at around R 120 for 200 grams – R 165 for the beef fillet, as well as ostrich game, curry, and duck; pasta dishes ranging from R 70 – R 189; and desserts.

*   The Raj in Camps Bay has taken over from where the Gateway to India restaurant was in The Promenade in Camps Bay, taking over the furnishings of the restaurant as well.  The Raj has sister restaurants in Johannesburg.

Other restaurant news is the following:

*  Top 10 Eat Out chef Jacques de Jager is moving to Salt restaurant at the Ambassador Hotel in January, leaving Grand Provence just 2 months after winning the Top 10 accolade.  This is the second time that a chef has left Grande Provence soon after winning the Top 10 award – Peter Tempelhoff left even sooner after his win in 2007, joining the McGrath Hotel Collection.

*   Table 13, a lovely breakfast and lunch venue inside the T & Co furniture and deco shop across the road from the Green Point Traffic department, is offering a 3-course dinner and a glass of bubbly for R 170, for the first time, tonight and tomorrow night.  They serve all day breakfasts, and lovely home-made lunches. Tel 021 418-0739