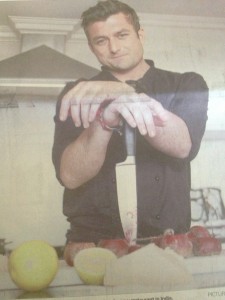 Guy Clark, the best looking and one of the nicest MasterChef SA Season 1 Finalists, has been in India for the past six months, helping to set up a restaurant kitchen, and has just been appointed as one of two chefs to run the kitchen of Uzuri (meaning ‘goodness’ in Swahili), a European/African fusion restaurant seating 90 patrons, which is opening in New Dehli next month.  He returned to Cape Town to renew his visa last week, and cooked a five course meal for his friends and food writers at his mother Di’s house in Bakoven.  Chef Guy’s MasterChef SA experience has taken him a long way, both figuratively and literally!

The first surprise on arriving at the dinner was seeing Samantha Nolan, also a MasterChef SA Season 1 Finalist, who looked amazing, relaxed and happy, now working for former Miss South Africa Cindy Nel in her cosmetics company.  Raymond Endean, Manager of Orphanage Cocktail Emporium was there too, as was T’amo von Arnim, Nicola Darkin 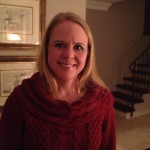 from the online section of Media24 and her husband Pete with a colleague from Food24, Wiaan Bedeker, Ondine Mond (who is planning a TV show for restaurant reviews), Guy’s mom Di, and Lynne Pearce from Franschhoek. Chef Guy had barely been home when he was featured in the Weekend Argus on Saturday.

Chef Guy wanted to share news about his new job, and give us a taste of some of the food which he will be cooking at the new restaurant, his co-chef Rimish Sachdeva having worked at Michelin star restaurants in London, including The Fat Duck.  Guy is very excited to be rubbing shoulders with this experienced chef. Chef Guy made Top 11 of MasterChef SA, and worked at the Madame Zingara group when he left Nederburg, at Café Mozart by day and The Bombay Bicycle Club at night, after resigning from a property broking company, to follow his passion to cook. Not expecting to get so close to Bombay one day, he was contracted by Indian billionaire businessman Analjit Singh, who recently bought a property in Franschhoek, and has got to know Guy’s parents there.  Guy’s job was to redesign the kitchen of Singh’s private homes in India, and organise the catering for Singh’s daughter’s wedding, at which Lionel Richie sang to the 2500 wedding guests, which included the Prince of Bhutan and Guy’s parents too.  The owners of the new restaurant had heard about Guy, and he was appointed.  The menu will feature European dishes, but with an African touch.  For example, a beetroot purée would be served as a rooibos tea infused purée, ostrich will be on the menu as will be pap, but beef will not.  Bunny Chow is on the cards, as are South African cheeses.  A statue of Shaka Zulu will take a pride of place, and a restaurant wall will be covered with a Masai Mara mural.

Our five course dinner kicked off with a Vanilla, ginger, sweet potato, and chilli soup served in a 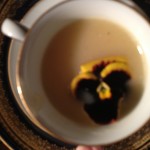 dainty tea cup, a most unusual mix of flavours, with a pansy adding a colourful touch.  The most 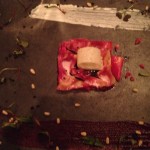 colourful dish was a Beetroot, goat’s cheese, pine nut, and fennel lasagne, topped with a parmesan tuille.  A cubed salmon ceviche with dill, topped with a deep-fried sushi rice ball, was the centre piece of a summerish dish which had a purée of avocado and asparagus on the one side, and a cucumber purée with caviar on the other.

The highlight was Chef Guy’s rib eye steak, prepared a beautiful rare pink with a coffee and paprika rub, 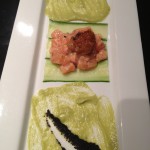 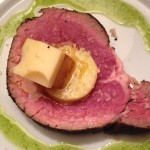 with a Dijon compound butter, potato fondant, and Emmental cheese.  Apologetically Chef Guy said that we should all know from MasterChef Season 1 that desserts were not his forté, yet we enjoyed his Tarte Citron, Chocolate ganache cake, and the gooseberry and almond lemon cream pastry.

Given Chef Guy’s meteoric rise in the past year since leaving MasterChef Season 1, one can expect even more from this incredibly nice and talented chef.  We wish him and his colleagues goodness for the new Uzuri restaurant.