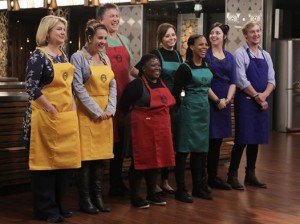 In MasterChef SA episode 10 last night five top South African sommeliers were invited to evaluate the pairing of two Tapas dishes of each of four teams with two Nederburg wines.  The Red Team won the challenge, winning a Secret Reward (it looks like it could be lunch at The Pot Luck Club), while the Blue Team had the lowest score, and will go into an Elimination Test in episode 11.

In winning the best chicken dish with her Coq au Vin in episode 9 last week, Penny Fitchet was honoured with the pairing of the eight finalists.  She paired herself with Francois Zietsman and decided on Blue aprons.  Philippa Robinson and Roxi Wardman were paired in the Yellow Team; Abigail Mbalo and Mel Sutherland were paired in the Green Team; and Ian Young and Sipho Mdlankomo were 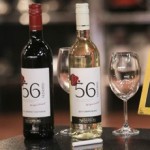 paired into the Red Team.  Each team had 60 minutes to prepare each of two Tapas dishes, to be paired with Nederburg 56Hundred Chenin Blanc for the first dish, and Nederburg 56Hundred Cabernet Sauvignon for the second dish.  We had learnt in a previous Season of MasterChef that the 56Hundred range was named after the price of 5600 guilders which was paid by Philippus Wolvaart to buy the farm which he named Nederburg.  Invited Sommeliers were Neil Grant, chairman of the South African 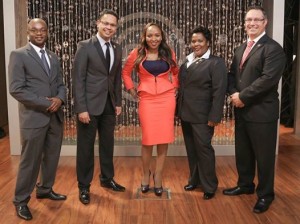 Sommeliers Association,and co-owner of Burrata and Bocca restaurants; Miguel Chan who is Group Sommelier of Tsogo Sun, very hard to understand with his Mauritian French accent; Pearl Oliver from the Belmond Mount Nelson Hotel;  Bongi Sodladla, Global Food & Beverage Manager of SAA, and not a sommelier!; and Gregory Mutambe from the Twelve Apostles & Spa, also almost impossible to understand.  Surprisingly M-Net did not use any sub-titles for the sommeliers.

Philippa and Roxi calmly decided what to prepare for the first Tapas dish, which was salmon fish cakes, a tropical salsa, and avocado ice cream.  They picked up lemon orange, and lime flavours in the Chenin Blanc.  Both admitted that they had not tasted their food.  Everything came together in the last minute, they said, and they finished on time.  They served their Tapas dishes in the Manor House, called The Red Table Restaurant at Nederburg, using one of the rooms, in which Chef Pete Goffe-Wood and the five sommeliers evaluated the suitability of the Tapas and the Chenin Blanc pairing for the first round.  The pineapple in the salsa was praised, lifting the dish and enhancing the Chenin Blanc, the chili which had been added not overpowering the dish nor the wine. The avocado ice cream was judged to be too rich for the wine.  The team scored 75% for the dish.

For the Cabernet Sauvignon pairing they decided on pan-fried duck breast, onion marmalade, and butternut purée, to pair with the ‘dry tanniny taste‘.  Pearl liked the way in which the duck and marmalade lifted the flavours of the wine, Neil praised the fattiness of the duck in lifting the wine, and Bongi said that the elements worked well with the wine.  Gregory did not like the sweetness of the marmalade. Both team members felt a sense of pride and accomplishment after presenting their two Tapas dishes.

Penny and Francois chose to make a deep fried salt and pepper baby squid, salmon, and a parsley and garlic aioli.  Francois was nervous to slice the smoked salmon, and he smoked chips with Rooibos.  They did the plating on slate plates. They felt the dish was perfect and fresh, and therefore it did not need to be tasted! Pearl picked up a burny taste on the calamari, the only (audible) negative comment they received.  The team scored 71%.

For the second tapas dish they made seared ostrich fillet and sweet potato dim sum, served with butternut and finely chopped beans, with they laughingly described as ‘Karoo meets Asia‘.  Their dish was described as being beautifully plated, but the ostrich was both praised and criticised by the sommeliers.

Sipho said that she had never done food and wine pairing before, so Ian said a lot rested on his shoulders.  They made a good team, 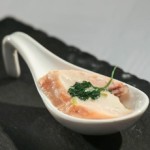 and decided to prepare a salmon dish, poached in the Nederburg 56 Hundred Chenin Blanc.   Their dish looked simpler than those of the other teams, and they presented their Tapas bites on Chinese spoons. They finished ahead of time, and the judges praised them for the simplicity of their dish, and its combination of flavours.  The team achieved a fantastic score of 89%. 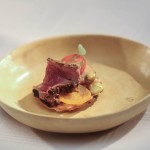 For the pairing with the Nederburg 56 Hundred Ian and Sipho made black pepper crusted seared beef carpaccio on crostini, with onion marmalade, tomato, aoili, and a horseradish sauce, which Ian described as ‘simplicity of the dish, with complexity of flavour‘.   The feedback from the sommeliers was unanimously positive, being told ‘you guys rock‘!

Mel admitted that she was not very clued up about wine. She and Abigail decided to make smoked (with ‘beachwood’ – as per the M-Net media release – and tarragon) potato cakes, seared salmon, and avocado, with a tarragon and wine foam. The sommeliers said the flavours came through well, despite it having been bold to smoke the potatoes as the wine was unwooded. The Green Team scored 77%. For the Cabernet Sauvignon the pair prepared a beef tart on crispy pastry, with tomato, aoili, a strawberry balsamic reduction, and sprinkled with smoked Rooibos salt.  The judges liked the ‘good marriage’ between the wine and the Rooibos smoked salt.

Coming together in the MasterChef kitchen, the sommeliers praised the quality of the food preparation , the finalists being described as ‘amateur cooks’ who had pushed their boundaries.  The scores for the second round were not divulged, but the highest average score of 91% went to the Red Team of Ian and Sipho, winning the secret reward, but they were told that they would have to wait until the next episode to find out what it is.  The program preview for next week showed the Old Biscuit Mill, and the building in which The Pot Luck Club is located.    The Blue Team of Penny and Francois had the lowest average score, and they will go into an Elimination Test in episode 11.

Much less time was spent on showing the Tapas preparation in last night’s episode.  Most of the sommeliers’ feedback, other than by Neil and Pearl, was lost on viewers, due to the poor articulation by the other three guests.  One wonders why M-Net did not test them for understandability and pronunciation!  Reuben Robertsons Riffel and Chef Benny Masekwameng had minimal input into  the episode, only chasing the teams to meet the time deadlines.

POSTSCRIPT 22/10: The Independent on Sunday copied and pasted M-Net’s media release for this episode, with embarrassing typing errors (for coq au vin and ballotine!).