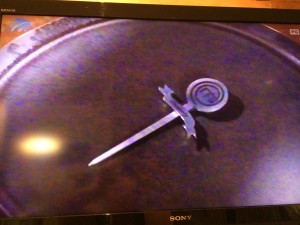 The eleventh episode of MasterChef SA Season 3 was a close contest between Ian Young and Sipho Mdlankomo for the Immunity Pin, and between Penny Fitchet and Francois Zietsman in the Elimination Test.  The episode ended off on a high for the seven remaining contestants.

Having won the paired Team Challenge last week, Ian and Sipho had been promised a surprise, and we recognised the Old Biscuit Mill, and the building in which The Pot Luck Club is housed.  Chef Luke Dale-Roberts was introduced, and a video link showed him speaking to the camera, being at least a year old in that it was incorrect about when The Test Kitchen and The Pot Luck Club had opened.  Chef Luke’s The Test Kitchen is in the World’s 50 Best Restaurants list, but this was misrepresented by M-Net, as the contestants were at The Pot Luck Club, which is not on the World’s 50 Best Restaurant list, 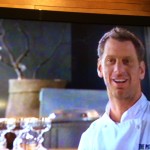 but was made to appear as if it is!  Instead of being served a lunch by Chef Luke, the two contestants were presented with a cloche by Reuben Robertsons Riffel, which when opened, contained an Immunity Pin. Sipho and Ian had to cook a dish created by Chef Luke, and the one replicating it most closely would win the Pin. The two contestants were given a recipe for Chef Luke’s braised pork belly served with apple, a miso and soy glaze, julienne vegetables, and a steamed Chinese bun, and they tasted a sample dish.  They were given 90 minutes to complete the dish, cooking in the kitchen of The Pot Luck Club. It was a delight to see Chef Luke smile, being the most grumpy-looking chef in most photographs taken of him!  He wished the contestants luck, leaving them in the care of Riffel, saying that it was an easy dish to prepare.

The two contestants received a collection of ingredients, and Riffel asked Sipho if she knew them all. She did not know Maltose (Chinese) sugar.  Sipho seemed nervous about the daunting task, and said that she had never cooked in a restaurant kitchen.  She said she had to knead the dough for the buns to ‘break down the gluten’, and she prepared them in a steamer basket.  She burnt her pork

belly in the pressure cooker, but cut off the burnt parts, so that Chef Luke did not pick up this disaster at all. She fried crackling in oil, cut the pork into cubes, and glazed them.  Ian cut himself whilst decoring the apples, removing the stalk too, so he had to repeat it again.  Despite being in control, he said that the last five minutes wizzed past, and he felt that his buns were not perfect.  He said it was a privilege to cook Chef Luke’s dish.  Chef Luke evaluated both dishes blind, and chose dish B, which was that of Ian, being judged perfect in all respects, but had more glaze than dish A prepared by Sipho.  In judging Sipho’s dish, he said that the dish was prepared by a person who has’ intuition and knows what it’s about’.  Both Ian and Sipho were praised, but it was Ian who had the Immunity Pin put onto his chef’s jacket by Chef Luke.

Having lost the paired Team Challenge in the last episode, Penny and Francois had to cook against each other.  They were told that only one of the two would return to the MasterChef SA kitchen after the Elimination Challenge. Francois noted the red smeg fridge nearby, and was nervous about the challenge being a dessert, not being his strength.  The challenge was a different one, a MasterChef SA quality dish having to be prepared from items in the fridge, typical of those items in a fridge in a home.  They were 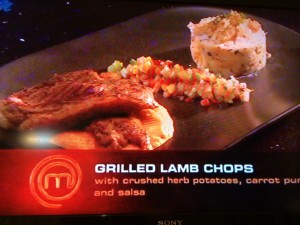 given a mere 40 minutes to prepare their dish, the tightest challenge on MasterChef SA to date, but said to reflect the average food preparation time in a home.  Francois made herb crusted lamb chops with crushed potatoes, a salsa of corn and tomato, and carrot purée.  Chef Benny Masekwameng liked Francois’ speed and urgency in meeting the time 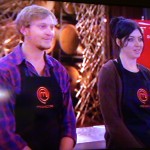 deadline.  He used a blowtorch to remove the skin of the tomatoes.  He said he was confident of his dish. Francois was described as the ‘meat man‘.  Penny was less confident in cooking with meat, and used mince to which she added herbs to fill the wraps. Chef Pete Goffe-Wood praised both Penny and Francois for their energy, speed, and skills.

Francois’ dish was evaluated first, and Chef Pete liked its look, being neatly plated, tasty, and he liked the caramelised onion on top of the potatoes. He did feel that the salsa did not match the rest of the dish.  Chef Benny said that he liked the potatoes, and praised Francois for being the ‘meat guy‘.  Riffel said that the carrot purée did not have the right texture, the carrots not having been cooked enough, even though Francois had used two sieve sizes to purée the carrots.   Penny’s meatball wraps were served with two side dishes.  She said it had been ‘hectic’ to prepare the dish in the short period of time.  Riffel liked Penny’s meatball flavour, Chef Pete liked the wraps, and said that the gherkin lifted the salsa. Chef Benny said that the wraps should have been eaten by hand.

While one felt that Francois had created a more special dish (although neither dish was MasterChef-worthy), it was Penny’s meatball dish which was judged to be the best, and it was Francois who had to leave the MasterChef SA kitchen.  Chef Pete said lovely things about Francois, saying that he will begin his journey of food, and one could hear the emotion in Francois’ voice when he spoke.  The remaining seven MasterChef SA contestants were taken back to the kitchen and were told that they too would leave the MasterChef SA kitchen, and they were sent to the lounge.  They looked sad walking there, not understanding what was going on. When they entered the room, they saw a collection of travel bags with Flight Centre branding, and they found a ticket each to Mauritius, the focus of episode 12 next week.  Penny was excited, as she has never been to Mauritius, despite having family roots in that country, and Sipho too was excited about her first trip outside our country.  Interesting was a comment by Roxi Wardman while Penny was cooking, saying that she and Penny would make top two on Season 3 of MasterChef SA!

For an overview of MasterChef Season 3 read here, and read here too. For a summary of episode 1 of Season 3 at Bootcamp 1 read here, and of episode 2 read here.  The summary of episode 3 can be read here.  Read about Roxi’s trip to Dublin and Thornton’s Restaurant, and the first Pressure Test in episode 4 here.   Read about the Carrot Dessert Invention Test in episode 5 here.  The Pressure Test with Swedish Chef Niklas Ekstedt, and visit to Syddah Essop in the Karoo in episode 6 is here.  For a summary of episode 7, a Team Challenge in Durban, click here.  For the write-up of the episode 8′s Pressure Test between Roxi and Refilwe, and the visit to the Ixopo Retreat by the winning Red Team, click here.  Episode 9 was a Chicken MasterPiece Invention Test.  Episode 10 was a paired Team Challenge.