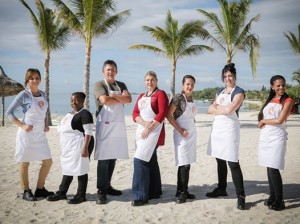 Episode 13 of the third Season of MasterChef SA continued its location in Mauritius, and the creators of the two weakest dishes in episode 12, being Penny Fitchet and Roxi Wardman, were to be pitted against each other in an Elimination Test.

The five successful Finalists from episode 12 received a sweet reward, being a MasterClass in Mauritian sugar by the Long Beach Executive Pastry Chef Sandra Scioli.  She showed them the different types of sugars produced in Mauritius, and which sugars are better to use for different types of baking.   It also demonstrated 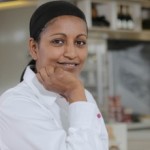 to the Finalists that the outcome of a dessert can be influenced by the type of sugar one uses.   Ian Young was impressed by the plating, ‘because it was very precise and very organised.  And you can see that a pastry chef has got a calmness about them that is very systematic. What she put on the plate was beautiful‘. 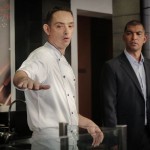 Long Beach resort in Mauritius.   Roxi and Penny were introduced to Chef Igor Bocchia, who had prepared one of his signature dishes, being Miso Scallops with prawn dumplings.  Roxi said that she had never made scallops before,even though she ate them at Thornton’s restaurant in Dublin.  Penny was intimidated by the foam on the plate, looking as if it had ‘washed in from the ocean’, Penny said.  Only one hour was allocated for the challenge, which was made more difficult in that the scallops had to be cooked on open coals on a yakitori grill.  Both Penny and Roxi would only be given enough scallops required for their dishes.  Penny said: ‘I’m feeling quite intimidated, to be honest.  Is it the same as a braai? You’re not 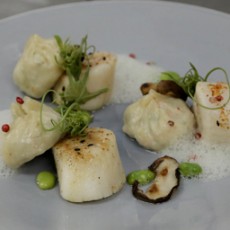 cooking a big piece of meat, you’re cooking a delicate scallop on that fire‘.

Roxi received praise for her scallops, from Reuben Robertsons Riffel.  Chef Benny Masekwameng wanted to see more foam, so that the fish stock could be more prominent. Chef Pete Goffe-Wood loved the dish, praising the perfectly seasoned scallops, which had been ‘cooked to perfection‘, as well as her dumplings.  On the other hand, Chef Pete also liked Penny’s scallop, but felt that her dumplings were unsatisfactory, with very raw garlic and ginger, Chef Pete said. 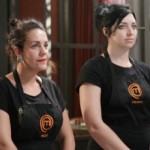 The Chef judges decided that Roxi’s dish was the closest to Chef Igor’s dish, and described it as near perfect.  It was time for Penny to hang up her apron.  Phillipa said that Penny had kept her on her toes, and said that she would miss having Penny around.  Roxi was upset in losing her close MasterChef SA friend Penny, now fully determined to win.

For an overview of MasterChef Season 3 read here, and read here too. For a summary of episode 1 of Season 3 at Bootcamp 1 read here, and of episode 2 read here.  The summary of episode 3 can be read here.  Read about Roxi’s trip to Dublin and Thornton’s Restaurant, and the first Pressure Test in episode 4 here.   Read about the Carrot Dessert Invention Test in episode 5 here.  The Pressure Test with Swedish Chef Niklas Ekstedt, and visit to Syddah Essop in the Karoo in episode 6 is here.  For a summary of episode 7, a Team Challenge in Durban, click here.  For the write-up of the episode 8′s Pressure Test between Roxi and Refilwe, and the visit to the Ixopo Retreat by the winning Red Team, click here.  Episode 9 was a Chicken MasterPiece Invention Test.  Episode 10 was a paired Team Challenge.  In episode 11 Ian Young won an Immunity Pin, and Francois Zietsman was sent home.  In episode 12 the Finalists visited Mauritius, and Sipho won the dish of the day.