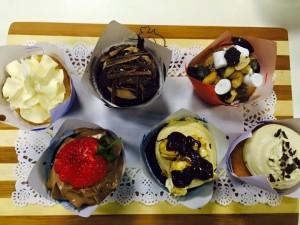 Yesterday I visited two coffee shops created by MasterChef Season 3 Finalists in Morningside in Durban, demonstrating how good the amateur chef competition has been in stimulating entrepreneurs to open businesses.

It was a delight to meet Roxi Wardman, winner of MasterChef SA Season 3, who opened her Spoonful Eatery inside Anthology shop in the Windermere Centre four months ago. On MasterChef it was 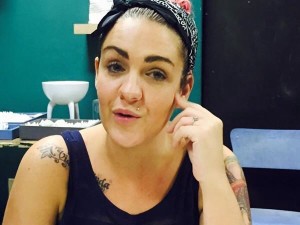 clear to see that Roxi was an avid baker, and her focus at Spoonful Eatery is cakes and cupcakes, with good coffee. Her cupcakes are unique, not seen anywhere else, with amazing toppings, and she proudly told me that she does not use icing sugar to coat them.  She uses Italian butter créme, with interesting toppings, such as Chocolate Nutella, Mint Aero Bubbly, Rocky Road, Triple Chocolate, Fanta Grape, Vanilla on Vanilla, Caramel popcorn with chocolate ganache, peanut butter frosting, and Vanilla Latte. Roxi took a cupcake of each kind out of her display case, put a paper doilie on a wooden board, and 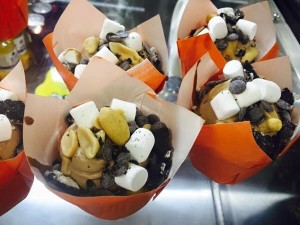 styled it for me to photograph. She also bakes Vanilla and Milo, Turkish Delight, Tiramisu, and Lindt Dark Orange chocolate cakes, but not on Sundays.  She decides on the day which flavors she will use for her 120 or so cupcakes she bakes daily. I tried the Chocolate cupcake with my dry cappuccino, and was delighted that Roxi sat down with me to chat about her life since winning MasterChef SA Season 3.

For the first time the winner of the MasterChef Season was not announced in the last episode, but six months later after the Season had aired on TV. The awards ceremony was broadcast live as the last episode, and for six months Roxi had to live with the uncertainty of the outcome. All her MasterChef Season 3 fellow Finalists joined her for the broadcast in Johannesburg, where she was up against Sipho Mdlankomo, a popular Finalist. Roxi’s now fiancé Byron and her parents joined her at the event, while Sipho’s employer family traveled up from Cape Town. Roxi thought that she would not win, given the great public support for Sipho, and wondered if the competition could have been rigged, as was suggested for the outcome of Season 2. Before going into the last cooking round, she knew that she was 2 points ahead of Sipho. No judges feedback was presented at the end of the last round, leaving both Finalists uncertain about their performance, and chances of winning. Roxi said that she was overwhelmed and emotional in winning, the 5-minute announcement being life-changing for her. Nine months ago she would not have been able to sit down with me for an interview, she said, having been so shy previously. Byron quit his job as a salesman, and he supports Roxi in her business, and is good at interacting with their customers.

The prizes were a great foundation to her new career, and she said that she was delighted that she won R500000 cash from Roberstons rather than a restaurant, as did Season 1 winner Deena Naidoo. She won a VW Tiguan, in which I was given a lift to ERA, being on their way home, and safely delivers her cupcake collection to the coffee shop every day. They won a trip to the Seychelles, and stayed at a Tsogo Sun hotel in the Mahi Mahi Resort. Here they enjoyed the services of a private butler, who had food prepared according to their wishes, included bat, which she said tasted like mutton, but with many small bones! The hotel pastry chef did a lesson in chocolate pastry, while the Executive Chef went to the market with her, identifying local fruit and vegetable varieties she did not know.

The highlight was an Ultimate Wine Discovery tour of France, which had been prepared with a detailed itinerary, including five days in Paris, and time spent in tasting wine in Bordeaux, accompanied by a tour guide, the language gap being pronounced in this area. They loved Saint-Émilion.  In Paris she attended cooking lessons with a husband and wife chef team at the Le Foodist cookery school, teaching her savory and sweet highlights, respectively. She received vouchers from Woolworths to the value of R100000, and wines from Nederburg to the value of R10000.

But the greatest benefit of  winning MasterChef SA was that they could afford to have a holiday in Cape Town earlier this year. They fell in love with our city, having stayed in an apartment on Upper Bree Street.

Some of Roxi’s customers know that she won MasterChef SA, while others don’t, and support her regularly for the fabulous and unusual flavor of her toppings. What made Roxi’s success story so unusual was that she started her career as a train driver, having heard about job opportunities at Transnet while she waitressed. She and a friend applied, and she got in (the friend did not), attending the School of Rail, writing tests, and driving trains in her practical period, 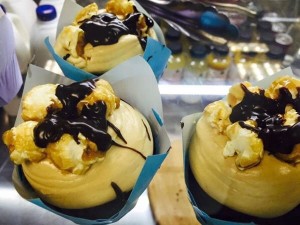 given the results of aptitude tests. One weekend a month she had off, and this time she spent on her passion of baking and cooking. It was interesting to hear that Roxi is not fond of sweet treats, preferring savory foods!

Roxi took over the lease of CoffeeTree, which operated in the Anthology art and clothing shop, a small space with only six tables. She has decided to not renew the lease 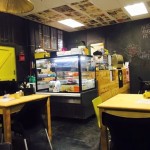 when it expires at the end of September. This opens up a number of exciting opportunities for her and Byron, which could even include Cape Town! 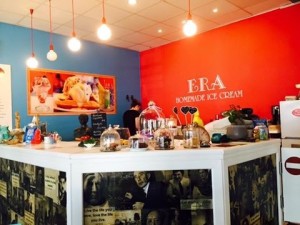 I called former teacher and MasterChef Season 3 Finalist Penny Fitchet to check if her coffee and ice cream shop was open yesterday, and she replied that it was, but that she takes Sundays off.

It was a shame not meeting her, as her two waitresses did her a great disservice, not managing to make a dry cappuccino as the coffee machine does not have a frother, but trying twice to make what I had requested. The menu is extremely minute, only offering waffles and ice cream sundaes, priced at R30 on the menu but costing R40 on my bill. Everything about the waffle and ice cream order was uncertain – we had discussed that there would be syrup on the waffle, but then the waitress told me that I had the choice of chocolate or caramel sauce for the sundae, then I was asked if I wanted icing sugar on the waffle, which is when it became clear that there is no syrup at all.  My waitress did communication in relay, asking her colleague questions, and then answering accordingly. Despite having been employed there for a month already, it was evident that she had a very poor knowledge of the menu, which only consists of the 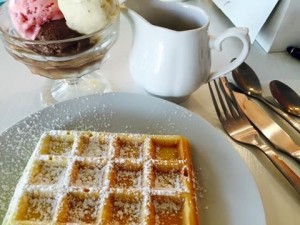 two items! It was almost impossible for the two waitresses to hear each other as the radio station playing in the coffee shop was far too loud.

The ice cream is delicious, home-made in the shop, and most of the flavors have quirky names, such as Vladimir Lenin’s Classic Vanilla, Charlie Chaplin’s Chocolate, and Liberace’s Lemon Meringue, tongue-in-cheek descriptions created by Penny’s husband Alistair. 125ml costs R25, 500ml R50, and 1 liter R100. They also sell cupcakes, but they are not price-marked on the counter nor listed on the menu. Overall it was a disappointing experience, the waffle being dry, and the waitress communication poor and misleading!