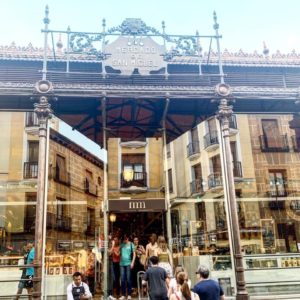 I had not heard of the Mercado San Miguel Food Market in Madrid until the Hotel receptionist Davide told me about it, he not knowing of my interest in food. Compared to the TimeOut Market in Lisbon, the Madrid market is smaller, has less seating, but its food is more beautifully presented.

TimeOut Market Lisboa presents the best cuisine of Lisbon, Portugal, under one roof!

In summary, the TimeOut Market in Lisbon has standard branding of its 25 restaurants, a few bars, some florists, and a merchandise shop, and uses top Lisbon chefs to attract customers to the Market, locals as well as tourists. It stays open until midnight and a number of aspects are standardised, with a central plate clearing and table cleaning service shared for all the restaurant tables, and all restaurants using the same tray and TimeOut tray paper ‘cloth’. Each stall highlights 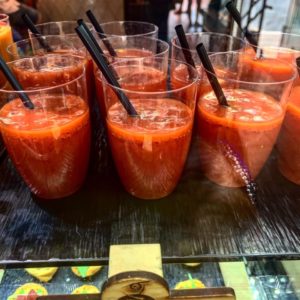 its short menu on its stand. It has a venue at least twice the size of the Mercado de San Miguel, and far more tables and seating in the centre of the venue. I did not see the timers calling clients when the dish is prepared as I did in Lisbon, most of the dishes being pre-prepared at the San Miguel Market.

The Mercado de San Miguel website seems at first to be very video-driven, but then one gets the hang of it. In its introduction it explains that the Market is located in the original fruit and vegetable wholesale market of Madrid, established over 100 years ago. It is described in the website as one of the ‘world’s main gastronomic markets’.  I am not sure where this accolade derives from.  It adds that visitors can experience the ‘essence and most significant flavors of every corner of Spain’, including Galician fish and shellfish, Mediterranean rice dishes, and cheeses from Castile, Asturias, and the Basque country. The Market is described as being committed to ‘high quality tapas and pub fare’.

Some of the twenty stands at the Mercado de San Miguel, not that I ate at all of them or 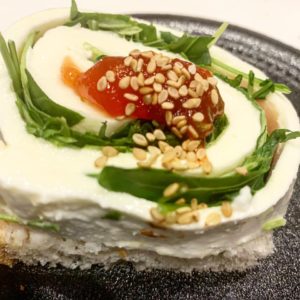 even photographed them all, are the following:

#  Mozheart, a stand with Tapas made with  mozzarella as its base, as rolls, on bread, looking like cream in some instances, definitely an attraction at the Market. I had a tapa of the mozzarella rolled with rocket, and topped with tomato jam and sesame seeds, attractive and good to eat too, except there is no cutlery, everything is eaten by hand. They use 30 styles of Fior di Latte mozzarella in the preparation of their dishes, including Bocconcino, nodino, rolls, stracciatella, and burrata. Some of the mozzarella cheeses are imported from Bari in Italy. 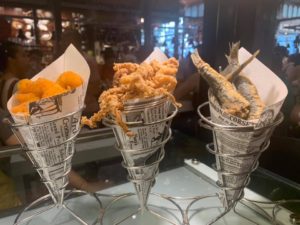 in Spain, as well as pickled olives, peppers, and other pickled products.

#  Daniel Sorlut, offering four types of oyster, including a green oyster, and a Spéciale Daniel Sorlut oyster, as well as caviar.

#  Pinkleton & Wine, offering more than 200 wines and champagnes by the glass. Sherry has recently been added to their wine menu. 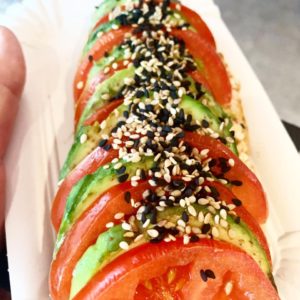 guacamole, and other delicacies.

#   Amaiketako as a word means ‘the one at 11h00’, explains the website, a mid-morning snack, but also being served as a starter. I think that it was from this stand that I had a tomato 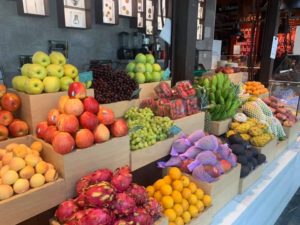 and avocado sandwich, sprinkled with sesame seeds, but it was difficult to eat, the toppings falling off the sandwich as I bit into it.

#  Felixia offers fruit to buy to take away, as well as fruit kebabs, salads, juices, and more.

#  Raza Nostra, working only with finest Angus and Wagyu beef, and they serve steaks, hamburgers,  kebabs, oxtail, tripe, and more.

#. Mya Valdalos is a cheesery, offering about 200 artisanal cheeses, both from Spain and other 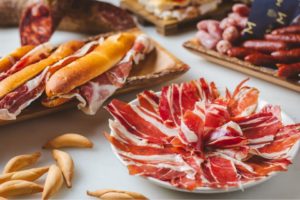 countries such as the UK, France, Italy, and Switzerland.

#.  MAS Gourmets/Carracci/ Ibéricos, offer meat products made from their own pasture-raised Iberian pigs. They also offer charcuterie and chorizo,

#. Paella by Rodrigo de la Calle, owned by the Chef of a one Michelin star restaurant, makes paella and other rice-based dishes using traditional recipes but adding his own touch. I saw a black rice 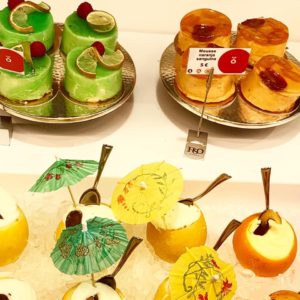 paella at his stall, the recipe being uniquely his. He is a student of the late great Chef Joël Robuchon.

#. I am sorry that I missed the stand Rocambolesc of Chef Jordi Roca, the Pastry Chef of Celler de Can Roca, a recent number one in the World’s 50 Best Restaurants List.  His 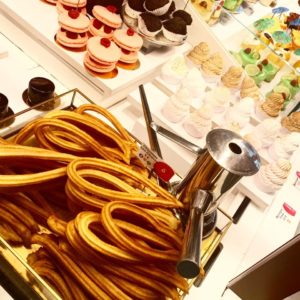 stall offers natural and artisanal ice creams, and his stand is described as a ‘monument to desserts’. It seems that I did photograph some of its wares, and was particularly attracted to its Churros. 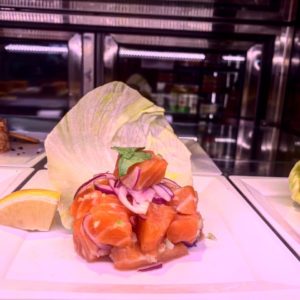 tartare, and this beautiful ceviche tapa.

#. Café Negro offers excellent coffees made by professional baristas, and slices of cake, including carrot and marble cake.

On my second visit to the Market on the same day, I found a seat and shared my section of the table with Australians Katherine and Geoff, and meeting two young Italians sharing with us too, one of my lovely endings to the day. Food lovers visiting Madrid should not miss this unique food and beverage collaboration in the city.