The Sweet Service Award goes to Mercedes-Benz Century City and its Service Advisor Chad Lentoor for quickly organising one of his mechanics to replace a dimmed beam Xenon globe at zero labour charge, and to the efficient Moesfeka Davids in their Parts department, who had a quote printed out and waiting for us when we arrived. She was friendly in offering her service and sourcing the part required. 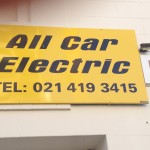 The Sour Service Award goes to All Car Electric on Bree Street and its owner Mr Pandy, for their excessive overcharge by more than R5000, in replacing an intake manifold for my car, having bought the part from Mercedes-Benz Culemborg’s Parts Division. Whilst we were at Mercedes-Benz Century City to replace the globe, we received a quotation for what Mercedes-Benz charges for a new intake manifold with gaskets, and an estimate of their labour cost.  My car was at All Car Electric for 2½ days, and I was continuously told that they needed to have it for so long so that they could strip the engine until they got to the broken part, which they wanted to try to repair for me rather than have me buy a new part, so that I could save money!  In the end they recommended that I buy the part new at ‘R16000 something‘.  I didn’t have a choice, as I needed the car back.  I was not quoted the labour cost upfront (charged for 7 hours) nor told that the cost of the part was exclusive of VAT, which is contrary to the Consumer Protection Act!   The mark-up on the part was 55% alone, Edward in the Parts division at Mercedes-Benz Culemborg confirming that they had sold the intake manifold to All Car Electric, and that they had offered them a trade discount as well! Similarly the bulb for the car was quoted at 27 % more than the Mercedes-Benz price, which takes some beating! The owner Mr Pandy is a glib smooth-talker, and is dishonest in ripping off his customers by not quoting honestly upfront and charging unheard of mark-ups!