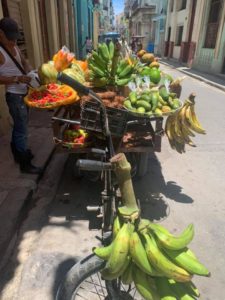 I had not done much homework about the eating habits of the Habeneros, somehow thinking that there would be ‘Westernised’ restaurants should the Cuban food culture differ radically from that which we are used to. I was in for a big surprise!
I was in quite a shock about conditions in Havana, in general, and then when I walked past restaurants and bars, first in my suburb of Centro, an area that is very run down, and then when I discovered Old Havana. There was not one restaurant that has attracted me,  not in walking past it, nor from its descriptions in the Guide Book ‘300 Reasons to love Havana’, which I bought on the recommendation of a regular visitor to the city from Canada.
The restaurants in Havana that were recommended with an international link were the following, the link itself appearing to give the restaurant kudos, if I have read the author of it correctly.
#. Café Bohemia – this Italian style restaurant in an alleyway with Greek-blue trimming was recommended to meat lovers as well as vegetarians in my Guidebook. I ate a delicious gelato here. Emphasis here is on salads, which are named after literary works, including a seafood salad named ‘The Old Man and the Sea’, after Hemingway’s best known novel.
#. Café Del Oriente – this is said to be where diplomats dine, serving rabbit, ostrich, Chateaubriand, steak tartare, and more, an international menu, and a classy old-world dining room.
#. Paladar San Cristóbal – it is owned by Chef Carlos Cristóbal Márquez, who ‘worked as a chef all over the world’, the Guidebook proclaims. The restaurant opened nine years ago, and President Obama as well as five other presidents, Bon Jovi, Sigourney Weaver, and other VIPs have eaten here. The chef claims to make the best mash in the city. South African wines are said to be in his winelist, worth checking out before I leave.
#. La Guarida – this majestic sounding restaurant, in the home of Enrique Núñez, opening in 1996, was the location for the movie ‘Freso y Chocolate’ (Strawberry and Chocolate), the only Cuban movie to have been nominated for an Oscar. It serves top level and innovative dishes. VIP diners include Jack Nicholson, Steven Spielberg, Beyoncé, and the former Queen Sofia of Spain.
#. Casa Abel – this restaurant belongs to the father of my BnB owner Abel, and has a cigar salon too, not far from my BnB.   It serves lobster, and the speciality is ‘beer-can chicken’.
#. Otramanera – this restaurant bandies the holy restaurant name El Bulli, the king of all king restaurants in the world once upon a time, its owner Chef Alvaro Dieu having worked in its molecular gastronomy kitchen.
#. El Ajibe – this was recommended to me by two sets of persons, but its description of it as a take-away chicken outlet with an excellent wine cellar seems too bizarre for me to try it.
#. TocaMadera – this is billed as the first Gastropub in Havana, and its owner Chef Enrique Suárez, is described as a leader in Cuba’s ‘New Food Movement’. His international cooking experience includes Barcelona and Marseilles. He serves ‘poor people cuisine’ with ‘strong flavours’.
Havana has no fast food restaurants, no known brand name restaurants. There may be advantages (it is too expensive for many Cubans, given their extremely low incomes, and it will prevent an Americanised fast food culture from developing in the country, given the love-hate relationship between Cuba and America); and disadvantages (tourists may feel less comfortable with the local traditional food and therefore may find it hard to find good restaurants serving their type of and taste in foods).
Pizza restaurants seem to be extremely popular, especially amongst locals, and I have seen queues of locals standing outside a ‘hole in the wall’ pizzeria on Obispo, a very touristy street.
Observing the food scene for a few days after my arrival, I realised that most of the Havana food offering is not to my taste: it consisting of rice and black beans, both starches I do not care for; tapas style restaurants are not my thing, with bread as its base; and the hassle of explaining in English how I would like a dish prepared was too risky if there was miscommunication between myself and the waiter.
I 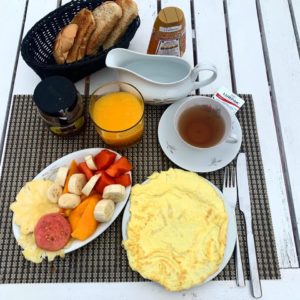 therefore decided to partake in the Breakfast offered in the San Lazaro 115 BnB every day, costing 5 CUC per day, and consisting of a platter of fresh fruit (guava, pineapple, mango, paw paw, and banana); a generous glass of freshly squeezed juice, the juice of one of the fruit types, varying daily; tea ( I must have pulled up my nose at the offering of green tea, the only tea they had at the BnB initially, and the next day a magic Earl Grey tea bag was presented, bought especially for me, savouring this daily gift; an egg choice, choices having been medium (my choice) boiled eggs, scrambled, fried, and omelet. I became so comfortable at the BnB that I started making my own cheese omelet, and boiled my own eggs, as I could not get them to get it to 6 minutes. Toast was supplied from rolls which were sliced and toasted. One portion of butter is provided, and a choice of jam or honey. This breakfast sustains me throughout the day, not being hungry, and not eating much else. One drinks a lot of water, and of course the Mojitos and Daquiris are the national drink, amongst tourists at least, and the locals drink local Cuban beer or Havana Club rum (Alain the BnB Manager mixes a local version of Red Bull with it, and adds ice). The locals certainly do not drink cocktails.
Supermarkets in Havana are something else, unattractive, and not selling anything fresh, with some exceptions. In the main they sell a limited selection of tinned or dry foods, pasta, juices, water, and Cuban alcohol. There is no fresh bread (that is sold by the Pan Man, riding through the suburbs on a bicycle trolley, calling his customers with his offer), no fresh fruit or vegetables (these are sold at corner fruit and vegetable shops in the most unhygienic conditions, covered in flies, and largely past their sell-by date, and limited to bananas, mango, paw paw, pineapples, guavas, cucumber, small tomatoes, and onions in the main. Alternatively one sees mobile fruit and vegetable street vendors, pushing a wooden trailer, with the most delicious looking large avocados, and one or two other 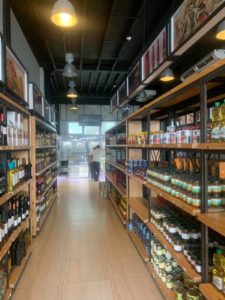 fruits. One supermarket close by, on the scenic Malecón promenade, was the most modern and organised I experienced, and also selling a sipping yoghurt (but only in strawberry flavour) with frozen meat (chicken, sausages) as well as blocks of cheese (a light cheddar, called Maasdam, sold at 13 CUCs per kg) unusually offered too. So my dinner, when I was hungry, was some cheese and avo, the latter lasting me four or five days, they being so big. They cost 1 CUC for two, an absolute bargain at R7,50 each. With that was the luxury of my left-over Woolworths trail food, which I had bought for the Camino.
I soon became aware that I was starting to lose weight, walking a good 10 – 15 km a day, in temperatures of around 32 C with humidity, therefore drinking a lot of water. I call this my ‘Cuban Diet’, working wonders! 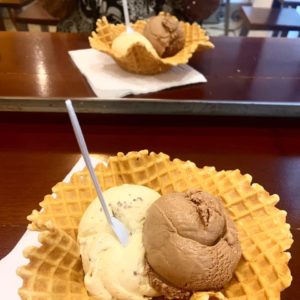 Helad’Oro was an ice cream shop which was highly recommended in my Havana Guidebook, and I went there five times in a week, when exploring Old Havana. It was First World, in offering wafer cones or cups, with a host of flavours, including a delicious dark or white chocolate, salted caramel, peanut, coffee, Spekulaas (a Dutch Christmas ginger-spiced biscuit), Nutella, lemon pie, Mojito, and tropical fruit flavours. They charge 2,50 CUC for two scoops and the wafer cup. I also indulged in a small cup of Churros without chocolate sauce, at 0,50 CUC, at a mobile vendor near the chocolate shop in Old Havana. In this suburb too I ate delicious home-made gelato at Café Bohemia, with a scoop each of vanilla, chocolate, and strawberry, more expensive at 5CUC.
I visited the Pool Bar at the five star Gran Hotel Manzana Kempinski once, and while their menu is very Westernised, the salads had ingredients I did not care for. So I settled on a Tiramisu, not too badly made, although I missed the liqueur in it, at 6 CUC.  An ice cream dessert at the five star Packard Hotel was very disappointing, a hotel which charges astronomically, a single tot Jameson costing 8CUC plus an automatic 10% service fee, even if the service is highly deficient, and one is not always told about this charge on the menu.
I am interviewing locals about their eating habits at home, and will report on that in a separate Blogpost.

2 replies on “My eating experiences in Havana, Cuba! As little as possible!”