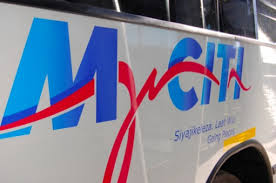 The City of Cape Town’s MyCiTi Bus service has received mainly praise since it was introduced in 2010, just in time for the World Cup (although not meeting its deadline for the event for its original transport plans), and has praised itself recently for how many passengers its has transported, and how it is expanding the routes.  All of a sudden it is facing a PR nightmare, which it seems inexperienced to handle!

Two months ago the MyCiTi Bus service was criticised by Professor Deon Knobel, who wrote an open letter to Mayor Patricia de Lille and to Brett Herron, City Councillor for Transport, in the Cape Times.   Professor Knobel observed how wasteful the route in Oranjezicht/Tamboerskloof as well as Camps Bay is, asking some hard-hitting questions about the costs of running the service.   In the past week, the City has had to deal with two further problems, the most recent being the most debilitating in terms of the impact of its image.  It also informed Capetonians that the bulk of staff operating the MyCiTi Bus system are not employed by the City of Cape Town, but by third party contractors:

*   Last month the City announced that it had fired Lumen Technologies for alleged ‘underperformance‘.  The company was appointed two years ago for a 7-year period with a R234 million contract, to control the operations of the MyCiTi Bus system, and its keeping to time schedules.  On Social Media platforms, and on Twitter in particular, an increasing number of Tweets reflected delays in arriving at bus stops with advertised arrival and departure times.  Lumen Technologies has threatened to take the City to court, while the City is advertising for a new operator.

*   Far worse for the MyCiTi Bus and the City of Cape Town’s image is the report in the Cape Argus last Wednesday, with a headline ‘Our lives are at risk‘, which shared not only that 70 MyCiTi Bus drivers employed by Transpeninsula Investments (TPI) were on a ‘wildcat’ strike about their working conditions, but that these conditions are so bad that the drivers could possibly cause accidents!  Scaringly the drivers expressed concern about their own lives, and not about those of their passengers! Driver Johannes Gordon will not be on the City’s party list, with his revelation to the newspaper that he often nods off at traffic lights being so tired!  He is reliant on his passengers to tell him that the lights have changed to green, he adds!  He prays that he will not fall asleep and go over a cliff whilst driving on Victoria Road to/from Hout Bay!  The drivers complain that they have to work split shifts, and are therefore exhausted!  Drivers are collected between 3h00 – 5h00, drive the MyCiTi buses from 5h00 – 10h30, have off from 10h30 – 17h00 but without a place to sleep or enough time to go home, drive buses from 17h00 – 22h30, and then get driven home between 23h00 – 1h30! Commuters ‘would not step  near a bus’ if they knew how tired some drivers are, Gordon told the reporter!

TPI told Cape Argus reporters that they are unaware of any driver grievances, and that they have not used the correct channels to address them.  The newspaper listed eight accidents, some with fatal consequences, in which MyCiTi Buses have been involved since the inception of the service in 2010.  The striking drivers told The New Age journalists that their drivers had been involved in 37 accidents in the last four months alone!  The SA Road Passenger Bargaining Council investigated allegations of ‘unlawfully short rest periods‘ as well as underpayment last month, and found that the allegations had merit, given that the labour law dictates a daily rest period of 10 – 12 hours.  The routes affected by the strike included Hout Bay, Camps Bay, Oranjezicht, Cape Town International airport – V & A Waterfront, Gardens, and Civic Centre.  Strikers barricaded the gate to the Prestwich bus depot, to prevent drivers from the other two contracted companies in driving the buses.

The striking bus drivers returned to work on Friday.   The New Age reported that the bus strike continued into a second day as the 100 striking workers were asked to sign a letter, agreeing to not intimidate any fellow staff members on their employer’s premises.  They refused, and stayed away from work for another day.  The workers signed the letter and returned to work when the offensive clause was deleted!

The City of Cape Town has a PR company which handles all its media coverage and Social Media for the MyCiTi Bus.  Its work is focused on publicising new routes, and to spin all the positive publicity it can.  On Social Media Herron’s arrogance is visible, as he rarely replies to any Tweets addressed to him.  Increasingly the MyCiTi Bus Twitter operator also does not reply to criticism about the bus service!  Perhaps the PR company can spin Herron and the bus service more positively by replying!  The Councillors generally do not like to accept responsibility nor apologise for any problems associated with its bus system. One would think that with the PR problems created by its poor relationship with one of its three bus operators, and the lack of an operating company at present, that the City of Cape Town would hold back on launching any new routes.  The newest MyCiTi Bus route to be launched is the Atlantis one, on Saturday.