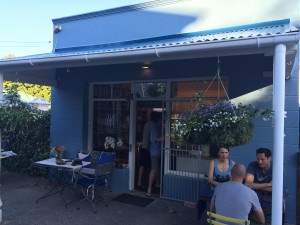 The Blue Café opened in Tamboerskloof on Saturday, after a few months of renovation, having operated as The Daily Deli for 18 years.  The small building with attitude has a heritage dating back to 1904, and is set to become the new secret food treasure in the hood of Tamboerskloof.  Pricing is very reasonable.

I drove past yesterday afternoon, having seen a Tweet referring to its opening, and met the charming Murray von Hirschberg, co-owner with his wife Jeanne, with input from her mother Lynda Loubser.  Jeanne started working at Melissa’s Kloof Street as a teenager, first as waitress during weekends and school holidays, and then joined them full-time doing product development, having worked there for 13 years, 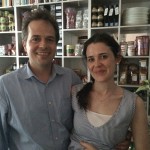 and giving up a dream to study medicine.  She told me that she loved working for Melissa van Hoogstraten.  It is Jeanne’s distinctive handwriting that was used for all price labels at Melissa’s for all the years that she worked for them. Murray told me proudly that Jeanne was accepted to do an MBA at UCT without a base degree, that she received a scholarship to study Organisation Development at Cornell University in the USA, and will start working on her PhD shortly.   Murray was an investment banker in New York, owns a massage company Enmasse, and has launched a unique Enmasse rooibos tea blend, telling me that most people don’t know how to make a proper pot of Rooibos tea.  Murray and Jeanne got married earlier this year.

The Loubser family has lived in Tamboerskloof for many years, around the corner from The Blue Café building.  Thys Loubser was previously CEO of KWV International, and was a very close friend of my late brother-in-law. Daughter Jeanne had eyed the building over the years, and when the opportunity came to buy it, with the house next door, she and Murray jumped at it.  They changed the name to The Blue Café, it having been called Die Blou Kafee prior to being The Daily Deli.  They can seat about 20 guests outside, having added a separate seating area off the pavement, with a planter filled with lavender, which they will use for their dishes, and a new seating area downstairs for bad weather days.  Hanging plant baskets give a European feel to the building. 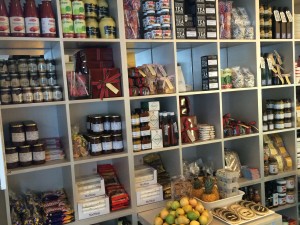 The exterior of the building has an attractive new blue coat of paint, and the interior has been changed to have one wall with shelving, the coffee machine being opposite it with a counter containing a display of ready-made sandwiches, cakes, Amsterdammers, fudge, and marshmallow fishes and mice!    In-between is a fridge with Richard Bosman cold meats, frozen pies from Ou Meul Bakkery, and cheeses, as well as a freezer for The Nice Company ice creams made by Cherylle Cowlie.  The Deli stocks fruit (orange, guavas, naartjies, pineapples, lemons) and vegetables (e.g. gem squash), while the shelving 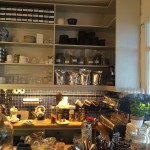 I love the idea that they want to serve the Tamboerskloof neighbours first and foremost, hoping that they will walk from their homes to enjoy coffee, breakfast, lunch, dinner, or some cake, and to buy their requirements. They will actively seek feedback from their customers, wanting to know what they require, and how things can be improved.  Very exciting is that they want to encourage the neighbours to bring them their self-grown produce, which Jeanne and her mom will transform into marmalade, soups, and other produce for the shop, in return for a ‘bartering’ credit for other items in the Deli. They already sell the honey from Stanford of their Tamboerskloof neighbour. Longer term they want to give children in the ‘Hood’ seeds, to encourage them to grow herbs and vegetables, which they will barter too, creating a mini urban carbon-footprint-friendly garden in that section of Tamboerskloof.  Free-range eggs come from Malmesbury, and Richard Bosman supplies the charcuterie.  They plan to offer a drive-by coffee service, which will be brought to one’s car and put onto one’s account, an ‘old-fashioned’ service linking to their neighbourhood ‘General Dealer’ positioning. 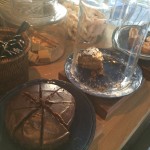 Two coffee options are offered, a strong imported Italian Tomeucci, and a blend from Truth, and is served in handle-less Bodum glass cups. Coffee costs R15, and the lovely Banting-friendly chocolate cake made by Lynda with almond flour and topped with a Lindt chocolate and cream ganache costs a mere R12,50.  There is no printed menu yet, as Murray and Jeanne are testing acceptable price levels.  The blackboard has some basic items listed, such as breakfast (around R50), croissants and toast at R16,50, sandwiches at R25 – R29, cheese platters at R65, and meat platters at R75.  Jeanne will be offering her five-cheese Macaroni and Cheese, and other home-made dishes, over time.

One senses that The Blue Café will be hugely successful and become trendy, if the number of occupied tables reflected early yesterday evening, the patrons not even picking up that load-shedding was happening in Tamboerskloof at the time, except when they entered the Deli and saw the lit candles.  Both Murray and Jeanne have been thinking and planning about their project for many months, and one can imagine that it will evolve over time, based on feedback from the neighbourhood, and once they start serving meals other than breakfast.  I will return to add a description of the food, once the menu is finalised.  They will not offer wine, but welcome BYO without corkage.  I like the ethics of the new business, all past staff having been retained, but with training to be offered.  Although she may not like the description, Jeanne and her The Blue Café may become the Melissa’s of the future!

POSTSCRIPT 18/12:  After six weeks of stopping at The Blue Café regularly, it is disappointing to see the service deteriorate so badly. Simple promises to bring another glass of water do not translate into action, despite great willingness to do so expressed when the order is placed.  The invoicing is rarely accurate, and a paper bill is not always provided.  The owners are not there most of the day, and there is no strong champion in the kitchen nor front of house (manager Elmarie is fantastic), meaning that the waiting time can be long, especially on Saturday and Sunday mornings.  Staff are untrained, most not having been waiters before.  Items stocked are inconsistently available, most of the times the response being that they are ‘out of stock’ of those things that one has come to like eating and drinking there.  Starting with very low prices, they have now become expensive (the newly introduced pizza is still good value however). Inconsistency in all respects is the by-line at The Blue Café now, not a good foundation for a new business!

POSTSCRIPT 23/1:   The City of Cape Town has withdrawn permission for The Blue Café to use tables and chairs on its pavement, after many years of the previous owners doing so. 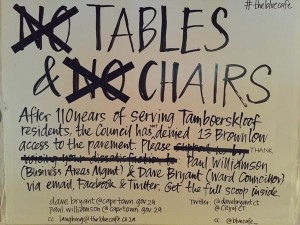 Following unprecedented support from the Tamboerskloof residents the council has assessed & approved the use of the sidewalk’!  This must be the fastest approval in the history of the City of Cape Town!