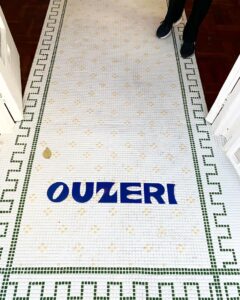 I spontaneously dropped in at the new Cypriot Ouzeri restaurant on Wale Street last night, and learnt about Cypriot food, about its owner Chef Nick Charalambous, and tasted dishes from Greece and Cyprus I’d never heard of before.

Arriving at 18h00, with no one else present, the hostess at the door told me that they are fully booked, and was happy to send me on my way. I told her that I wasn’t planning to spend the whole evening there, and did she have a short gap for me. The Restaurant Manager was kind, looked at her Reservations schedule, and found a table that gave me a one hour eating time, which was perfect.

The restaurant opened on Wale Street in the space of a coffee shop next door to Honest Café on 16 June. Being fully booked on a weekday night almost two months later is testimony to the fact that 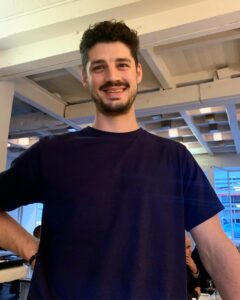 Ouzeri has taken off in the city centre.

Owner Nick came to say hello, and I realised that I knew very little about him. Somehow I associated him with being a bar mixologist, but he is in fact a Silwood qualified chef who does not appear to have made an impact on the restaurant scene in Cape Town previously. From Pretoria originally, with grandparents who immigrated to our country in the ‘Seventies during the Turkish invasion of Cypress, Chef Nick alluded to having had a bad traumatic experience in a top restaurant he was working at, which moved him out of the restaurant industry and took him to Dubai for 18 months in a completely different field. I did not ask him what made him come back to Cape Town, 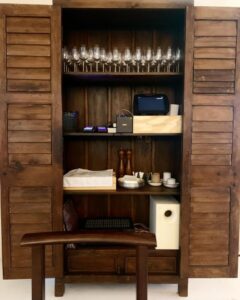 and to open his own restaurant.

Nick worked with designers Master Studio in creating a less is more interior, with classic wooden and very comfortable chairs, especially made for the restaurant, and the design echoed in a cupboard I was facing, storing the music system, glassware, credit card machines, napkins, and more. Interesting Greek/Cypriot artefacts 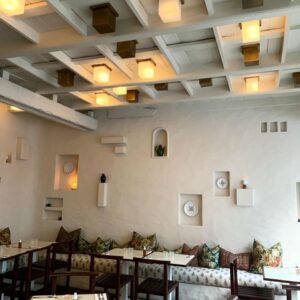 on the walls give a hint of the origin of the food in the restaurant, and there is none of the cliché Greek blue and related decor, giving the restaurant a classy feel.

The waiter brought some water, the menu, a winelist with local boutique wines, and a list of Greek Ouzo and local Vermouth.  He had to explain each dish to me, as each item has Greek or Cypriot food terms. He apologised when he could not explain ‘tashi’ to me, being told by the Manager that it is a tahini sauce.  He has been in Cape Town for a month, and approached Nick for a job, as Nick’s mother was his Maths teacher at school in Pretoria.

I chose two Starter portions and a dessert: 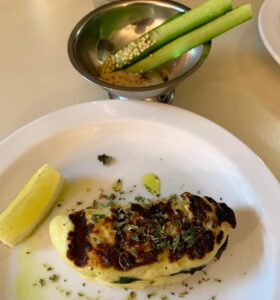 Cream of the Crop Halloumi (with a mint leaf in-between two halves)  served with cucumber sticks and a tashi dip, explained as being a tahini sauce made from a sesame seed paste, the cucumber refreshing and crunchy, and the halloumi not being too chewy (R110). Nick told me that his sister-in-law Maria has created a dairy brand Cream of the Crop, making butter, yoghurt, and halloumi from her cows in Piketberg. Some of her products are for sale at The Olive Branch, also owned by Cypriots.

#  Nick explained the Lamb Manti to me, being 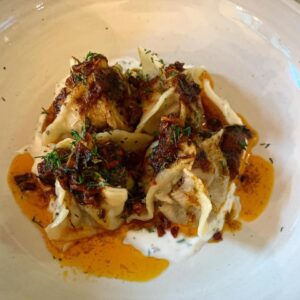 #   I was disappointed with the dessert, there only being two options, and I choosing the Mahalepi, described to 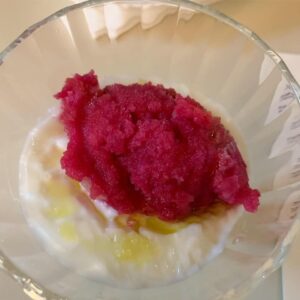 me by the waiter as a pannacotta, but certainly far removed from it,  which had a disturbing saltiness to it, Maldon Salt crystals having been sprinkled on top of it. A sorbet of Campari, clementine and pomegranate gave the dessert a colourful touch.  (R80)

I found Ouzeri to be a friendly classy restaurant, but felt intimidated by the dishes offered, all unknown to me other than the halloumi, therefore not knowing what to expect.  It was lovely hearing Greek music, but it was mixed with modern music. Fun is seeing a record player, which is to be set up for use, Nick said. Food portions are very small and therefore appear pricey for what one is served.  I had my meal in the hour allocated without feeling rushed, and was happy to have experienced something brand new and a class above any local Greek restaurants.