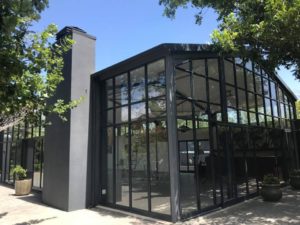 At the end of February, for a period of two weeks, French one Michelin Star restaurant Likoké will make a pop-up appearance at The Conservatory in Franschhoek, with its owner and Chef Piet Huysentruyt. A number of writers was invited to taste bites of his creative cuisine last month.

Chef Piet and I had met a year prior, in Johannesburg, at Chefs Who Share, where he was a 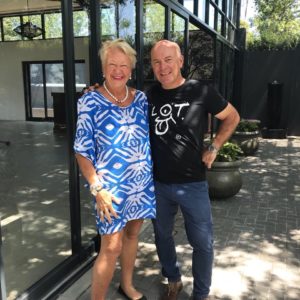 guest chef, flying into the city to cook alongside local chefs for the prestigious charity event. His chef partner for the evening was Chef Candice Philip from the The Saxon Hotel, and my first sight of Chef Piet was him dancing with her in the kitchen set up in the Johannesburg City Hall. What a fun person he is, I soon learnt, through the evening, entering the kitchen regularly, to photograph the dishes – I was lucky to be allocated a seat at one of the three tables he and Chef Candice cooked for. He stayed over at The Maslow Hotel as well, and we had an opportunity to catch up at breakfast before he had to catch his flight back to France.

Two months later we met again, by arrangement, at Pierneef à La Motte, enjoying lunch with Chef Piet and his wife. Their The Conservatory wedding and event venue is across the road from the wine estate.

Chef Piet is linked to the Belgian Congo, where his parents had a coffee plantation in the ‘Fifties, before they had to leave the country, losing everything. Likoké is a nickname his father was given by the locals in that country.

Chef Piet has created a restaurant tour, ending it off on the continent his father loved, and is dedicated to the spirit of his late dad. Escaping the harsh European winter, Chef Piet and his team devised a world tour of Likoké as a pop-up restaurant, just as a rock band would do. Its African run will be at The Conservatory in Franschhoek from 28 February to 15 March, at the cost of R1900 per person, including the wine pairing. The pop-up tour has been preceded by stops in Kortrijk in Belgium, Japan, Bali, and Singapore, before he brings the spirit of his father back to Africa. ‘Cooking at Likoké has always been about a story, about roots, soul and emotion and art’, he says, and this is reflected at Likoké and at his pop-up restaurant too. On the media day, Chef Piet wore a T-shirt with the 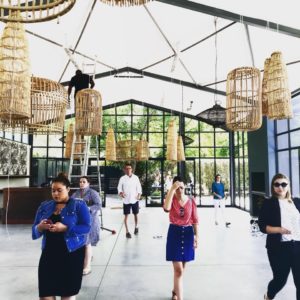 wording ‘LOT’, and he explained that it stood for Likoké on Tour. The two-week pop-up restaurant will be filmed by a TV crew, and documented by a writer and a photographer, with a view to capturing the world culinary tour in a next book.

Chef Piet came to South Africa two years ago, traveling in various parts of it, down the Garden Route,
until they arrived in Franschhoek, which gave him ‘goosebumps’, he shared. They ate at the former The Tasting Room, headed by Chef Margot Janse at the time, and it blew him away, he said.  The standard of the local restaurant kitchens is at an international level, and he has become friends with a number of local chefs. He likes that we do not have rules in the kitchens in South Africa. 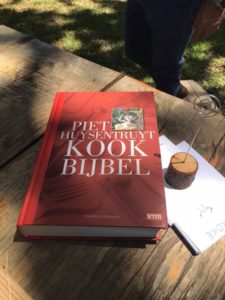 Chef Piet welcomed the invited writers, walking us through The Conservatory, and its kitchen, which he has had redone and which has a magnificent view onto the Franschhoek mountains.  Herbs are planted outside the kitchen door, including Marigolds, and basil. In France he has a 1,5 ha vegetable garden. We were then led to the garden outside his house, a wood top table displaying a selection of his books published to date.

Chef Piet shared that his life and career path have not all been rosy to date. Against his parents wishes he studied at the Ten Duinen Culinary Institute, followed by working at top French and Belgian restaurants, before opening his first restaurant. He has been very stubborn, and challenged his diners with his cuisine creativity, mixing meat and fish in dishes, and serving trotters and other offal dishes. In 1999 his signature dish was lobster, oyster, pig trotters, and red cabbage. He did dishes with buttermilk and yuzu sauces. He said that he was shot down in his home country Belgium for this ‘crazy’ Cuisine, yet did attain one Michelin Star. Chef Piet had to reconsider, having to make money with his restaurant, to support his family. His career changed direction, becoming a TV Chef with his own show, participating in more than twenty cooking shows, and he started writing, publishing 30 cookery books, with four million copies sold. One of his books was titled ‘SOS Piet X’, a ‘medical’ book providing remedies to cooking mishaps, which alone has sold 2 million copies. His first book was called ‘Contemporary and Stubborn’, and it used the phrase ‘Food Porn’ for the first time.

The next step was to buy a restaurant in France, setting up the Likoké Brasserie in Les Vans in the Rhône Valley n 2013. Here too he has achieved one Michelin Star, five months after opening!  The Gault et Millau Restaurant Guide awarded it three toques later the same year, as well as its Discovery of the Year accolade. Today the restaurant is ranked 39th on the WBP Stars World’s Best Restaurants List.  He retains his mix and match cuisine, despite the prescriptiveness of the French 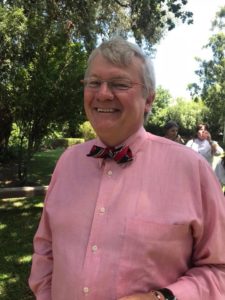 An hour after our arrival, a new set of guests arrived, being Franschhoek local chefs, wine estate owners, and other friends, including Franschhoek Wine Valley CEO Reinher Behrens (right), Hein and Hannelie Koegelenberg, the Belgian Consul Karl Stouthuysen, Chef Margot Janse, and Franschhoek Boutique Gallery owner William Vaesen. We were spoilt with a magnificent 13-course canapé menu, demonstrating the creativity of Chef Piet, assisted by only one local chef, and his wife. The creativity was not only evident in the combination of ingredients, but also the unique way of presenting his dishes: 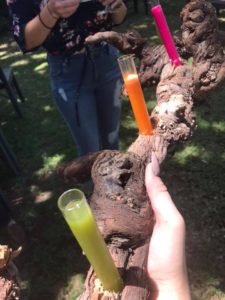 #   Cold Vegetable (carrot, saffron, and coffee; beetroot, coconut, and yoghurt; celery, tarragon, and cucumber) broth served creatively in test tubes, placed in vine branches, taking this very close to the Franschhoek wine industry, from which a selection of wines was offered. 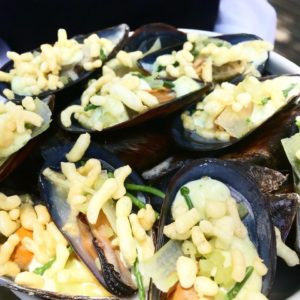 #   Moules Frites, with the chips being so tiny that they were served on each mussel. 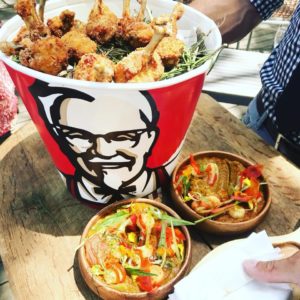 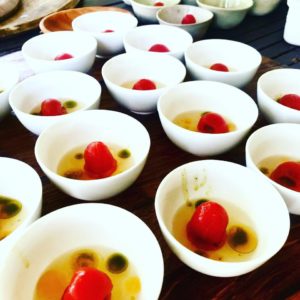 Franschhoek trout and tomatoes was a colourful canapé. 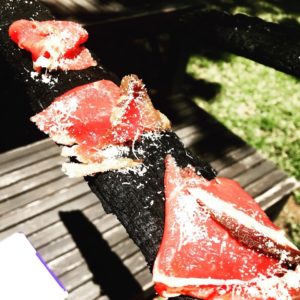 were presented in paper cones.

#   Biltong Grill was a delicious dish, a twist on a Braai, a beef carpaccio that was given a quick searing on wooden staves which Chef Piet had placed in the fire, and were then taken to the guests, to be carefully removed from the staves.

#   Stoverij and Friet was a dish to expose the guests to true Belgian chips, served with a stew. 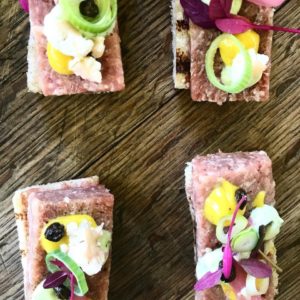 Pork tartar and pickles was an attractive canapé that looked liked a terrine.

#   A first dessert was chocolate, buttermilk, 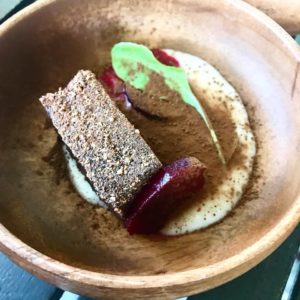 and beetroot, an interesting combination.

#   Lavender-smoked financiers followed the dessert, and concluded the meal.

Chef Piet says ‘Likoké’s core values reflect his family’s roots in Africa, his love of southern France’s terroir and his hardscrabble past in Belgium where he learned to appreciate the uniqueness of simple products’, the media release informs.

The Franschhoek Boutique Gallery will be supplying artworks to complement the space at The Conservatory for the duration of the pop up. ‘Large Mute” by sculptor Samuel Allerton, and pieces by Belgian artist Isabelle Scheltjens, exclusively represented by The Boutique Gallery in Africa, and currently exhibiting in Paris, Dubai, New York and Saint Tropez, will be on show.