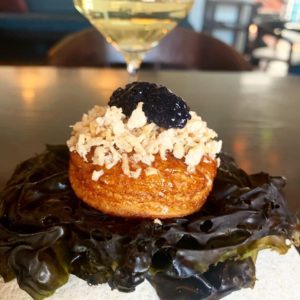 Two exciting top-end restaurant openings are those of Exhibit A (owned by highly acclaimed Chef Rikku O’Donnchü and Chef Warwick King, who left Gåte restaurant earlier this year), opening in the city centre on 1 November; and of La Chêne at Leeu Estates in Franschhoek. Interesting is that a number of new restaurants have opened on Kloof Street, our former Cape Town Restaurant Street before Bree Street took over,

#  Exhibit A fine dining restaurant opens on the 3rd floor of the Villa 47 building in the city centre on 1 November, for lunch and dinner (Photograph of Snoek and caviar topped vetkoek above).

#  Tryn has opened at Steenberg, under the stewardship of Chef Kerry Kilpin, also heading up Bistro Sixteen82.

Gorgeous George Hotel and its GiGi Rooftop Restaurant & Bar simply…Gorgeous, bowled over by the design, differentness!

#  Kong has opened as a bar and grill in De Waterkant.

#   Mykonos Taverna restaurant is opening in Camps Bay, in the former Dizzy’s Bar/pool area. It has also opened in Newlands.

#  Unfiltered has opened as a taproom with a beer and food offering, in conjunction with the chefs if Woodlands Eatery.

#  I love the Dough is to open on Bree Street.

#   The Crypt Jazz Club, restaurant, and cocktail bar has reopened on Wale Street.

The Crypt Jazz Club reopens in Cape Town as restaurant, cocktail bar, and jazz club, with new owners and energy!

#   Schoon Bread Café has opened in Franschhoek, where De Villiers Café used to be,

POSTSCRIPT 21/10: Thank you Peter Rhode for updating me on the Stellenbosch restaurant openings and closures.