The V&A Waterfront has completely transformed what was previously the Blue Shed near the V&A Market on the Wharf, renaming it Watershed (a corny name which tries to be clever, but it does not reflect at all what is inside the building), and creating a showcase of 168 crafters, designers, and more under one roof.

I was invited to attend the official opening of Watershed on 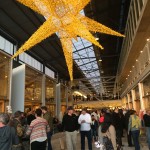 Thursday evening, and so were thousands of others, as the traffic jam inside the V&A was unbelievable, a trip between Kloof Street and the parking garage opposite Watershed taking 45 minutes traveling time!  There was no warning on radio nor through the V&A’s electronic information boards to stay away or to use an alternative route! 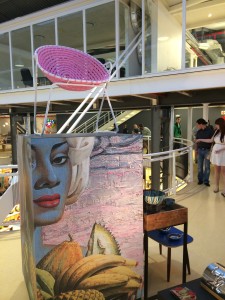 The building has been expanded to include the former ship museum space as well, and is on two levels now. Upstairs is one of two Jubilee Exhibition Halls (the other being downstairs), being named to reflect the 25th anniversary of the V&A Waterfront,  and currently the Cape Craft & Design Initiative is exhibiting its members’ design highlights in these Halls.  The rest of downstairs is dedicated to the Design & Craft Market. Two food trucks were visible, one with poor branding, and the other the well-known Limoncello.  A mezzanine level has not yet been completed, and will house Wellness operators by the end of this month. The entrance is new, facing the Aquarium. The redesign of the building was done by Wolff, taking into account the ‘formation and exchange of ideas between bourgeoning (sic) entrepreneurs’, describes the Watershed brochure. 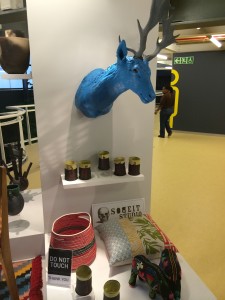 Networking and exchanging ideas between entrepreneurs will be encouraged in the building.  The ‘curator’ of the Watershed tenant mix is Trevyn McGowan, who organised the disastrous Gala Dinner with Reuben Robertsons Riffel at the Lookout to celebrate Cape Town hosting World Design Capital 2014 earlier this year

The design crafters have been categorised as follows:

*   Art & Craft – the emphasis is on Africa, and is aimed at tourists, described as ‘the perfect spot to discover that characteristically African momento you’ve been searching for‘.  The 51 exhibitors list includes CCDI members too, and better known standholders include Heartworks and Africa Nova.

*   Ceramics & Glass – there are eight exhibitors, with no well-known names.

*   Design & Furniture – 10 design companies are represented and are better known ones such as Jan Paul Barnard, Dark Horse, and Pedersen & Lenard.

*   Textiles – Helon Melon is the only known stand out of the four in total.

*   Fashion & Jewellery – this is the largest segment, with 63 jewellery, handbag, and clothing stands, including Township Patterns, and Blue Collar White Collar.

*   Wellness – there will be 13 service and related product suppliers.

One wonders what the Watershed will do to Woodstock, where many of the designers now housed at the 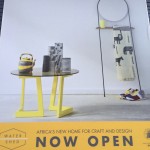 Watershed were previously operating from.