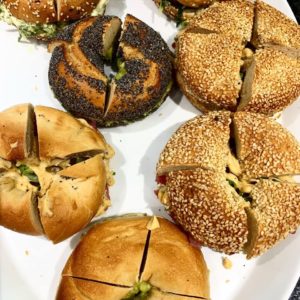 On Saturday morning I attended the launch of the innovative new Nuri Sushi Factory Breakfast Menu in Sea Point, invited by Brewz Krew MD Thabied Harris. The menu rolled out at the Sea Point branch yesterday.

It made absolute sense to launch a new Breakfast Menu at a morning event, and a Saturday has its advantages, in reduced traffic. This was the second combination Brewz Krew and Nuri Sushi Factory media event that I have attended. From the first one, I knew that it took a while for things to get 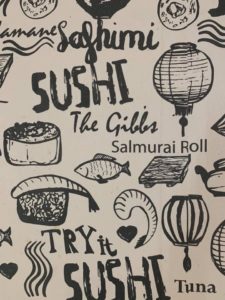 going, so was late in arriving, doing my Saturday morning errands speedily before the event. But on arrival, it still took time for the bagels to be prepared and the coffee to be served, I was not offered a ‘welcome drink’ of water, there being no host for this event from Nuri Sushi Factory’s side, Thabied being the MC and host on behalf of both parties.

I shared a table with Caitlin Adams, a blogger-to-be and currently a hospitality student, who was my taster, and was very honest in 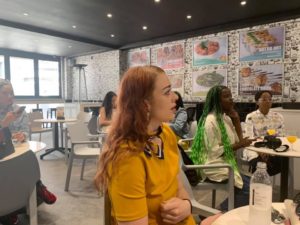 her feedback of what she ate. As I had given my Parisian friend a lift to Sea Point, she joined us towards the end, and tasted the sushi bagels I was served and photographed, but did not eat.  I informed Thabied that I was on a fast, and have stopped drinking coffee, but that I would write about the launch, given it being the first time that I have heard about a ‘Sushi on a Bagel’ Breakfast.

The new Breakfast Bagel Menu will be served at Nuri Sushi Factory outlets from 7h30 -10h00, having commenced with the roll-out in Sea Point, and thereafter every four days at another branch, being in the CBD, Stellenbosch, and Claremont. There are nine Sushi on a Bagel options to choose from, each inspired by existing sushi dishes offered by Nuri Sushi Factory. One is offered a choice of plain, and mixed 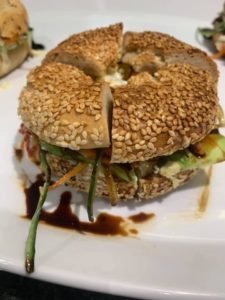 or poppy seed bagels. We were offered quarter bites of eight of the bagel options: 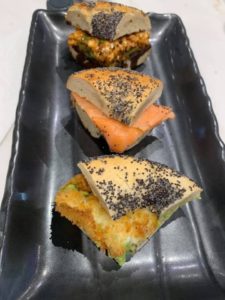 #   YUM bagel, with a breadcrumbed poached egg, and smashed Avo. R45. Smoked salmon can be added, at an extra R30. (Bottom on the platter, left)

and Nuri-Yaki sauce R50 – not offered to taste

While specific feedback from my two tasters was presented above, both told me that the bagels were tough, and that this would be a deterrent to them ordering from the Breakfast Menu in future. 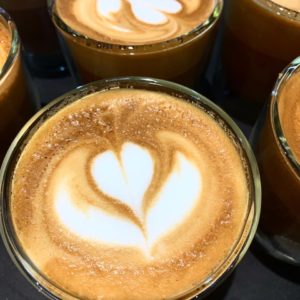 Gerald Charles is an Award-winning world six best coffee roaster, and is the co-founder (with Geoff Jones and Thabied) of Brewz Krew two years ago. Gerald made the coffees, three of their six coffee bean and roasting styles to try:

#   House Blend is a premium one, with beans from Ethiopia, Rwanda, and Uganda. The taste was described as wild, fruity, with blueberry notes.

#   Chiripo, named after the highest mountain in Costa Rica, the best bean supplier in the world we were told. It is a premium coffee.

# Quhwa, being high in caffeine, a niche product in the Brewz Krew range.

There were mutters at our table about how long it took 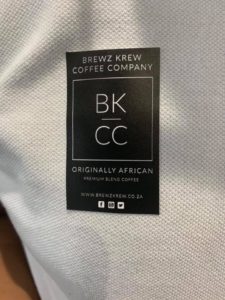 for the first coffee to arrive at the table, at least an hour after the start of the event, and the subsequent two were very slow in being served. At the event I told Thabied that I felt it a shame that they have abbreviated their company name to BKCC, to lose the funky Brewz Krew name, and it being too similar to the BCC of Bootlegger.

We were told that Brewz Crew Coffee Company offers the best coffee in the world.., just because it is the best. The company stands for ‘Originally African’. A Brewz Crew coffee shop is planned, and pods compatible with Nespresso machines will be rolled out as well. Other roasting and coffee styles are Organic, Decaffeinated, and an Original Africa Blend.

The media event was too stretched out, and I left after two hours, asking Thabied to speed things up, as we had other things to do on a busy Saturday morning. Some writers left earlier than we did. While I am a friend of Thabied, I have to honestly share the frustration of attending this function, which came across as amateurish, with slow coffee and sushi bagel serving, sloppy bagel presentation, some sushi ingredients missing in the bagels, and no menu or media statement presented to writers. The Nuri staff was talking while Thabied was speaking, making it very hard to hear him, It was a poor reflection on Nuri Sushi Factory, and by association, Brewz Krew. I had offered Thabied to provide information privately, and called him on Saturday afternoon. He wrote back to say he wasn’t feeling well, and would call me yesterday. We handed our business cards to Daniela Thibault, to receive a set of photographs of the event to be sent to us. I am still waiting for the photographs! I spoke to Thabied in a frank conversation this morning.

The event came across as amateurish, despite the novel Breakfast Menu addition, was disrespectful to us as writers, and was a poor reflection on Nuri Sushi Factory, and by association Brewz Krew.

Unique is the pairing of Brewz Krew coffee and Nuri sushi, and Sushi bagels. I attended a function of the coffee pairing and sushi making at Nuri last year.