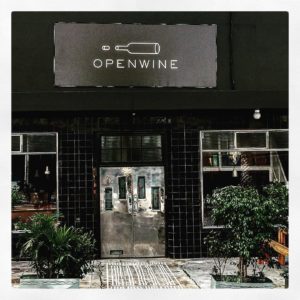 OpenWine ‘Taste Pair Shop’ opened on Wale Street in a chic less-is-more venue a month ago. Yesterday Seth Shezi and I visited OpenWine, and found two very friendly Italians who are passionate about promoting and drinking South African wine.

The focus at OpenWine is on wine, and they are not a restaurant, even though they serve food, stressed 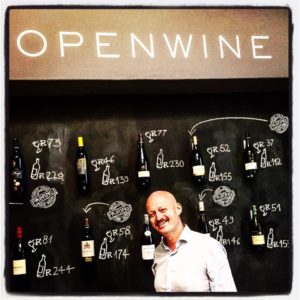 owners Raphael Paterniti and Marta Gabbo. They fell in love with Cape Town eighteen months whilst on holiday, and returned a year ago to set up a wine tasting venue, having experienced the difficulty of buying and drinking wines as tourists. They found that bottle stores and even waiting staff in restaurants did not know anything about the wines they were selling in 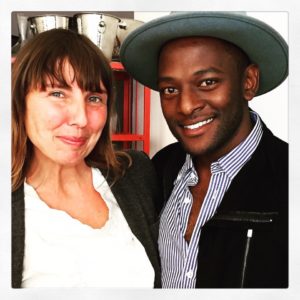 respect of the blend composition, the type of maturation, and length of time of maturation. Marta told us that Raphael’s grandfather was a champagne winemaker, for the Charles Orban brand.

This led Raphael (photograph above) and Marta (in the photograph with Seth, left) to decide to open a wine tasting venue.  They were lucky to know the previous owners of the space, who no longer wished to operate Isola, and so they agreed to try out their concept with a one year lease.

Raphael showed Seth and I around, including their kitchen leading from an outdoor courtyard, which they will also be able to use for seating in summer. On the street front they will also be able to seat patrons, currently seating 30 wine lovers indoors.  I loved the painted ‘flying carpet’ painted outside the front door, to guide the patrons who have drunk too much wine to their homes!

Raphael and Marta had bigger windows installed on the street 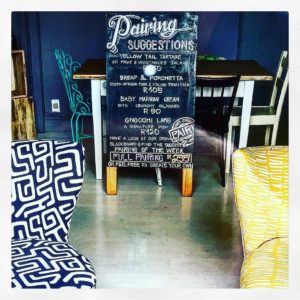 The feedback from wine estates is that they do not see OpenWine as a threat at all, and are happy to have a wine tasting facility at which they can be represented in the Cape Town city centre. In addition to wines, they are stocking gin, KWV Brandy, Dalla Cia grappa, and craft beers. They also want to support other products of wine estates, selling their honey, biscuits, olive oils, and more, from their bar counter.

Raphael was very generous in opening Altydgedacht MCC 2014, a favourite sparkling wine of his, sold at R90 per glass and R260 per bottle.

In the Lounge they have a black 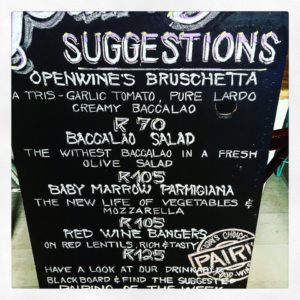 board with the week’s four dishes, which will be paired with lighter white wines, more full-bodied whites, lighter red wines, and full-bodied red wines.  The menu is changed every Wednesday. Yesterday the board offered Bruschetta, with lardo, a baccalao (cod) mousse, and a smoked Puglia Scamorza (R70), which was paired with a Creation Sauvignon 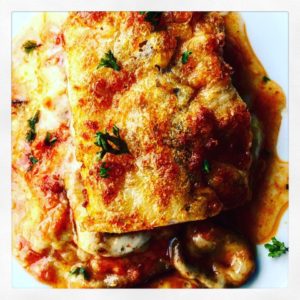 We were offered the Baccalao (cod) salad too, with potatoes, onion, and olives (R105), which was paired with Bilton Sir Percy Cape Blend 2009 (R220 per bottle). Another Bruschetta platter arrived, with Richard Bosman’s Salami el Vine (they sell it at the bar counter too, charging by centimeter), as well as French cheese maker Pepe Charlot’s Buchette and fynbos Tomme artisanal goats cheeses. Red wine bangers on red lentils (R125) was another lunch option for this week. 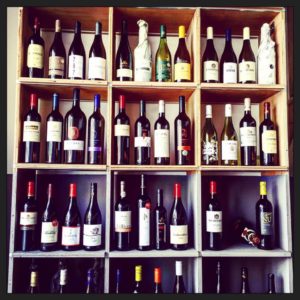 For each food course we were served, new cutlery and paper serviettes were brought to us.

Friends from Italy assisted Raphael and Marta in the interior design, and also guided the staff in cooking Italian dishes.

OpenWine is an ‘enoteca‘, Raphael said, and wants it to be seen as a ‘wine library‘, where patrons can learn more about wines.  They have an On-Consumption licence, and have applied for an Off-Consumption one, so that their customers can buy wines from them, to take home.

Seth and I enjoyed sitting and chatting, eating, and drinking wine in the OpenWine Lounge, a staff member checking up on us regularly. Both Raphael and Marta shared information about their new business, and were generous in allowing us to try their dishes and wines, even though we had never met, and had not made an appointment to see them, planning to find out more about their business, and to eat there.