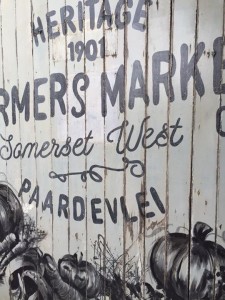 At short notice on Friday, Paardevlei Farmers Market in Somerset West announced that it would not be operating from its premises at Triggerfish Brewery at Paardevlei, having operated there on Saturday mornings since 29 August this year.

Paardevlei Farmers Market’s announcement about the closure of the Market on the following day was posted on Facebook on Friday 23 October:

‘PAARDEVLEI FARMERS MARKET STATUS: Due to the non-compliance of Trigger Fish for illegally selling beer without an on consumption licence, we have decided to retract from operating our market on their premises. We have been victimised, our marketing signs for directions have been removed with intent, we as the market owners were dictated to what and how we can sell. We were promised a building size of 300 square metres and ended up trading mostly outside the Trigger Fish Building. Due to the ongoing bullying by the owner and the enforcement of signing a very one sided contract [which will be also published], we will endeavour to continue with our market in another building. For now, the market will be closed until further notice. Extensive alterations to this heritage building has been done prior to the opening of the market without any approval from the City of Cape Town‘

A subsequent comment to a different but related post by Paardevlei Farmers Market elaborated with more detail:

‘Luckily social media is a platform to open discussion, and yes, the market is very prepared to face the music for any negative feedback, the sequence of events: 1. we applied for an event at The Foundry Building and was granted a permit; 2. we were bulldozed to trade at Trigger Fish with a contract that was limiting us to grow organically and dictated by someone who wanted to open a market on his premises 2 years ago; 3. on the launch date of the market, Saturday 29 August, someone reported the non compliance of Trigger Fish to the police, a huge reputational risk for us 4. the market was not allowed to sell any coffee, wine or mcc to pair with food dictated again by the current tenant, 5. we sourced our own vegetables and we take the risk at the end of the day, 6. the original 300 square building was promised to us, we could only use less than a 1/3, 7. the times of the market was dictated to by the owner of Trigger Fish, it changed 3 times, 8. we were bullied many times, threatened that they can close the market anytime, 9. they tried to find a reason to work us out when they realised we are sourcing a new building 10. our signs were damaged and removed, the security went into our store room without our consent, 11. R5000 fines were introduced if we exceed our market times, but we were the only ones bringing feet to Trigger Fish 12. this is our story and we do not have anything to hide and carry a very transparent authentic business ethic. Bullied, victimised and discredited is an understatement in the manner in which we were allowed to trade’.

The response by Triggerfish against the allegations of the Paardevlei Farmer Market, posted on Facebook on 23 October, is as follows:

‘Please note that the Paardevlei Farmers Market will not be held at Triggerfish tomorrow. We – Triggerfish – have been accused of being the cause in their attached post. Here’s our reply:
1. Yes, we are currently not licensed for on-consumption but there was absolutely no “illegal selling” as we had to re-apply for on-con due to an administrative error.
2. On Monday, we were notified by Paardevlei, on behalf of City of Cape Town, that the market owners have to provide them with an event license if the market were to proceed this Saturday. The owners were copied on the mail and I also immediately forwarded this to them. This morning I received a mail from Paardevlei stating that the license has not been produced and that the market would not be allowed tomorrow. I immidiately contacted Annemarie, my contact at the market, to strategise on running Saturday’s market. They were going to do all in their power to run the market.
3. It sounds like we’re accused of removing banners. That’s not true, how would that benefit us?
4. Please publish the contract. The rules are in there to ensure that the nature of the event would be a small farmers market and that Triggerfish can continue with our business as usual. We’ve accommodated all requests that would improve the event – like extending the time – without competing with our own business.
5. Triggerfish has spent a significant amount of money to accommodate the market. Like – Roof for the market, Power points to positions prescribed by the market owner, removing obstructions for tables in the taproom, upgrading ablutions, moving our storage area. If that was for a short term exercise we’d simply not have done it.
6. All changes to the building are removable, to specification, and with the full knowledge of the Paardevlei management. The building is not an official heritage building and was mostly derelict and slated for demolition before Triggerfish rented the premises. We’ve been in the building since April 2011 and plan to be here for the future’.

Paardevlei Farmers Market owner Elsje Schoeman is looking for a new building to host her Market, but it won’t be at the Triggerfish building again, and unlikely to be at Paardevlei, a shame as she had big plans to start an art studio in the Paardevlei Precinct with father and son artists Anton and Lionel Smit!