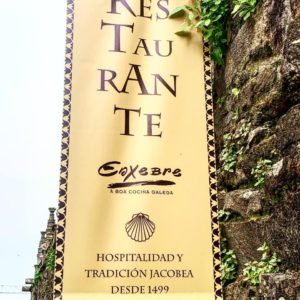 On Saturday I had the amazing fortune to enjoy a Pilgrim Lunch at Restaurante Enxebre, an informal restaurant which is part of the five star Parador Hotel in Santiago de Compostela, with seven other Camino pilgrims. To experience a Pilgrim meal is almost as much of a high as walking the Camino, and making it all the way to Santiago de Compostela, this tradition dating back to 1499.

For those of my readers who do not know: I have just completed my second Camino, 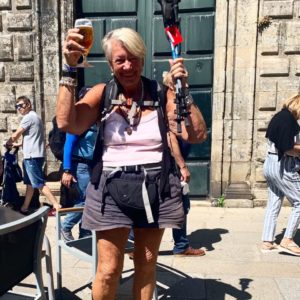 this year the Portuguese Coastal Camino, starting in Porto in Portugal, and completing it in Santiago de Compostela in Spain on Friday, 15 days and 300 km later. Every Camino pilgrim is entitled to a Compostela, a certificate which records that one has walked at least 100 km of a particular Camino Route, as evidenced by one’s Camino passport, in which one must present at least two stamps at accommodation and food establishments, and churches, per day, along the 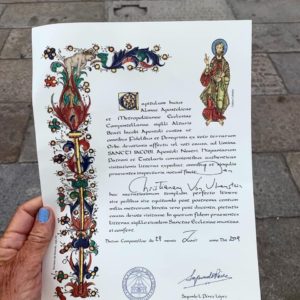 When I arrived at the Pilgrim office last Friday afternoon, I was faced by an endlessly long queue, and I read later in the day that about 2200 Compostelas had been issued on that day. As I am relatively allergic to queues, having taken about 90 minutes to be attended to, I was told, I decided to return early the following day, ahead of the office opening time of 8h00. A handful of pilgrims were already in a queue when I got there just after 7h00, and it was a great opportunity to chat to a student from a university in Texas, who shared with me that his Business studies class had done the walk of a month together, to learn about the small businesses of the Camino.

The doors opened promptly at 8h00, and we had to queue neatly, one behind the other. I happened to see on the Compostela display board that I was the ninth pilgrim to be served. The gentleman took my Camino passport, checked my stamps, and issued the Compostela certificate. He then surprisingly asked me if I wanted to attend a Pilgrims’ Lunch at the renowned Parador Hotel, a five star accommodation property located adjacent to the Cathedral of Santiago de Compostela. Out of curiosity I said yes, and then had to Google what this is all about. This is what I read:

’One of Paradores’ luxury and historic hotels’ most famous locations is Parador Santiago de Compostela, the former Royal Hospital that has presided over the city‘s Plaza del Obradoiro since 1499. Over the course of centuries, this iconic hotel has witnessed the arrival of countless pilgrims that conclude their long journey on the Way of Saint James, triumphantly entering Santiago 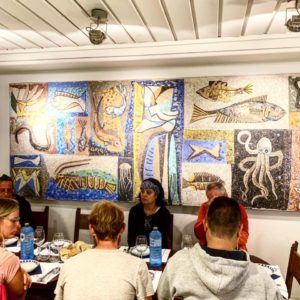 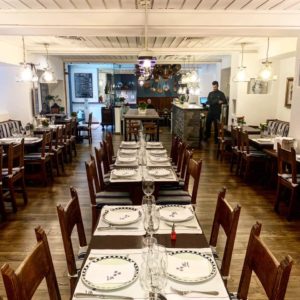 Parador Santiago de Compostela was originally established in 1499 as a royal hospital with the select mission of attending to the pilgrims that came to the Galician capital via the Way of Saint James pilgrimage. Today, it continues to honour that commitment to the welfare of those eager enough to complete the long journey by offering food to the first ten pilgrims that arrive at the Parador each day.
Those pilgrims that reach the Cathedral and acquire the accreditation certifying their completion of the Way are welcome to come to the Parador and solicit a free meal. Ten breakfasts, ten lunches and ten dinners will be served free of charge within the Parador’s luxurious setting to the first ten pilgrims who ask for the meal each day.] I did not ask for the lunch, the vouchers were gifted to the ten of us at the office issuing the Compostela certificates‘.

While this quote may sound as if we begged for our free lunch, we were presented the vouchers in being the first ten pilgrims whose Compestalas were issued on that morning. 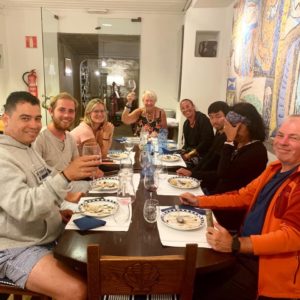 I arrived in time for the 12h00 lunch, seated at a table of ten right at the back of the Restaurante Enxebre, with a Brazilian woman pilgrim (she shielded her face in each of the three pics that were taken of our group), an Italian lady I had seen at the Café that morning, a 23 year old German Alex (second on the left) who walked into Santiago that morning after walking 2500 km from his home town of Düsseldorf, a young girl from Uruguay, a very young boy from South Korea, a Romanian man, and a man from the Canary Islands, a United Nations of Camino pilgrims. All of us had been caught by surprise with this lunch invite. Sadly 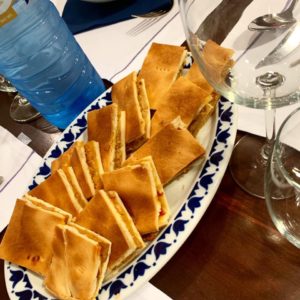 two persons did not pitch, leaving gaps at our table. Our table conversation was mainly focused on Alex’s 2500 km journey, and was split with a sub group only speaking Spanish. I connected with Misses Uruguay and Italy at my end of the table.

The food served was traditional Galician cuisine, a four course meal offered with bread, as well as a jug of white wine and a jug of red wine, shared by the table. Bottled water was on the table already, on our arrival. Our table was served a platter with tuna tarts, the content of the tarts 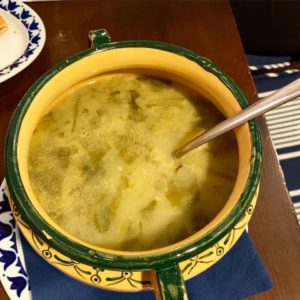 which we established by taste at the table, and this was confirmed by one of the waiters. The tray of tarts was shared by the pilgrims.

The bread basket arrived, and was circulated around the table. Two Parador-branded soup tureens were placed on our table, with no explanation, and it emerged that the vegetable broth had been prepared with celery, white beans, and potatoes, a Galician speciality.

Our main course was a veal goulash, served with a mix of cooked vegetables, including cauliflower, broccoli, marrow, butternut, and 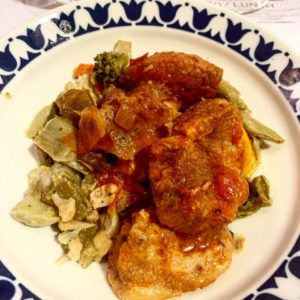 potato. The table liked this dish the best, the veal being so soft that one could break it with a fork, not needing a knife.

As no dessert spoons had been laid at our table settings, one could not assume that there would be a fourth course, but there was one, a 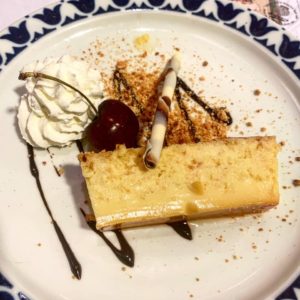 flan, served with a cherry, cream, a chocolate cigar, and crumb soil, drizzled with chocolate. This dish was a little more exciting in its presentation, yet the white cream on a white plate did not work.

We were served by two waiters, one called Carlos, alternating in coming to the table, whose brief was to be poker faced throughout the meal, to not greet or welcome us, and to use as few words as possible to answer any question, mine mainly about the ingredients of each dish. What a disappointment.  When the red wine had run out, that was that!

While the cuisine served at the Pilgrim Lunch did not excite me, it was the good fortune to be part of this group of Camino pilgrims that was allowed to experience a tradition of more than 500 years, that made the meal a highlight on my Camino. The poor disinterested service by the two waiters was a massive disappointment, it almost feeling as if they were forced to serve us, being far below the normal standard of the clients staying at the Parador hotel that they usually serve. I could not help but notice that every other table in the restaurant had material napkins on their place settings, but ours were blue paper serviettes!

I Googled Galician cuisine, and our vegetable broth is a typical local dish, called Caldo Gallego. Seafood, and shellfish in particular, is a typical ingredient in Galician meals, but our menu did not include this, Other Galician specialities are octopus, cheese queixo de tetilla (cow milk cheese), potato, meats, and empanadas, none of which were included in our meal, other than the veal.